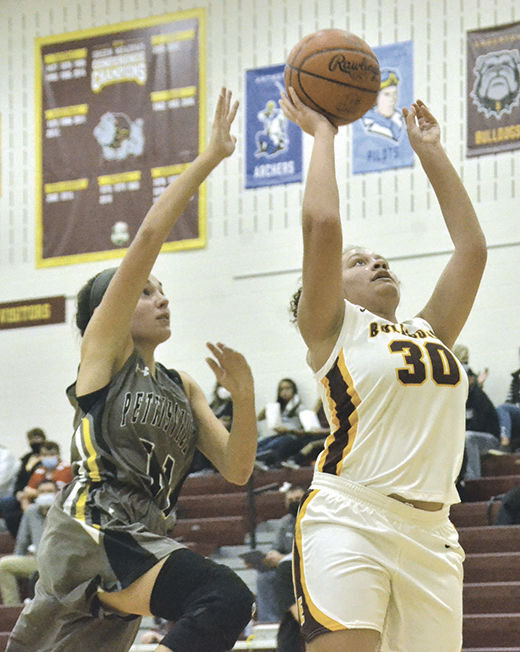 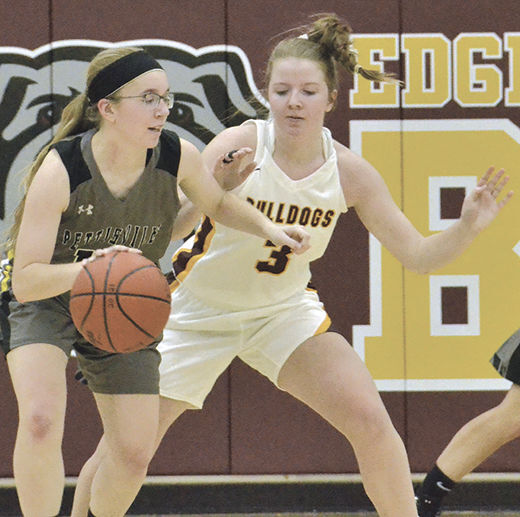 EDGERTON — It took some late-game heroics within the last minute of the contest, but Edgerton was able to pull out the win over nonconference foe Pettisville.

Tied at 32-32 with 57 seconds left, guard Brianna Wickerham nailed a 3-pointer from the left wing to give the Bulldogs a 35-32 lead. Fellow guard Rylei Moreno followed that up with a layup 32 seconds later to secure a 37-32 win over the Blackbirds on Saturday night at Edgerton High School.

The Bulldogs improved to 1-1 after falling 81-21 in the season opener at Paulding on Friday night.

“Compared to last night, I thought we played better tonight. We did the little things for a majority of the game,” Edgerton coach Nathan Davis said. “We still got a lot to work on.

“But I thought we went down a little bit (late), but in that last two minutes or minute, we went back to our fundamentals, stayed focused and did what we needed to do.”

“At any given time tonight, I thought every girl stepped up — from the first player coming in, from the last player coming off the bench. I thought everybody did their job,” Davis said. “Taylor Smith, Bri Wickerham, Dominique, Rylei, they all hit big shots at crucial times. And again, that just shows a little bit about our team that we can play.

“So if we can just have that confidence and still make those shots as the season continues and improve, who knows where our limits are going to be.”

“Honestly, it was a pretty ugly basketball game. But it was the first of the year in a crazy year,” Pettisville coach Jason Waldvogel said. “We’re just glad we got that first game in.”

Edgerton held a slight advantage over the Blackbirds in the first half. Audrey Schroeder got the first points of the game with a steal-turned-breakaway layup with 6:40 left in the first quarter.

From there, the Bulldogs extended their lead to 9-6 going into the second quarter.

Fort hit a layup while being fouled and converted the free throw to give Edgerton a 12-8 lead. But a putback by Crawford and a 3-pointer by Hartzler gave Pettisville a 13-12 edge with 4:23 left in the first half.

Grace Schroeder hit 1-of-2 free throws with 4:07 left that sparked a 7-0 run to give the Bulldogs a 19-13 lead. A Grieser layup and a free throw from guard Hollyn Klopfenstein in the last 25 seconds narrowed the Bulldogs’ halftime lead to 19-16.

“It was definitely first-game jitters last night ... But I also stressed that we have to be the ones that come out first. We got to make sure we get that first basket, that first turnover if we can,” Davis said. “If we can just come out and be aggressive, that’s going to set the tone for the rest of the game.”

The Blackbirds came out of halftime ready to fly. After taking a 20-19 lead with layups from Hartzler and Crawford within the first 1:40, Pettisville battled for the lead with Edgerton until the 3:50 mark, when a King putback jolted a 7-0 run to give the Blackbirds a 28-22 lead with 3:07 left.

Wickerham hit a mid-range jumper with 31 seconds left to make it 28-24 going into the fourth quarter.

“We’re very young and very inexperience, and we’re just learning how to compete,” Waldvogel said. “And I thought the second half we competed a lot better than we did in the first half. We’ll find our legs, find our roles and keep advancing.”

After a King free throw and Smith free throw tied it at 32-32 with 1:50 left, Wickerham hit the game-winning 3-pointer to give the Bulldogs a 35-32 lead, with Moreno’s game-sealing layup coming moments after.

“This was definitely a team win. It showed from the start to the end,” Davis said. “Our defense tonight I thought was exceptional compared to last night. This is a start where we can say, ‘We can start improving.’