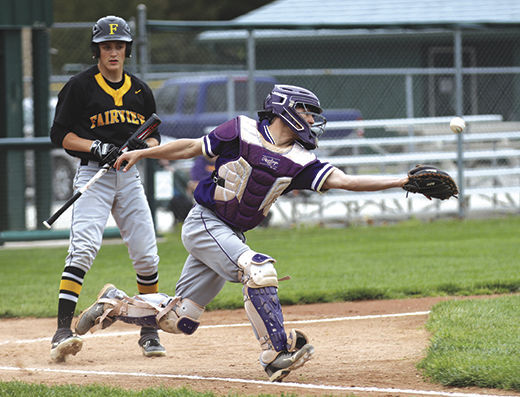 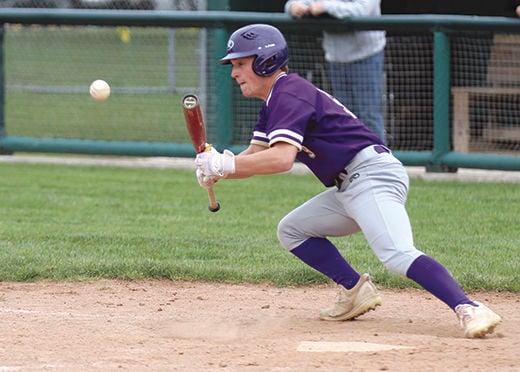 Bryan’s Quinn Brown lays down a bunt during the sixth inning of Tuesday’s baseball game against Fairview at Sumpter Field. 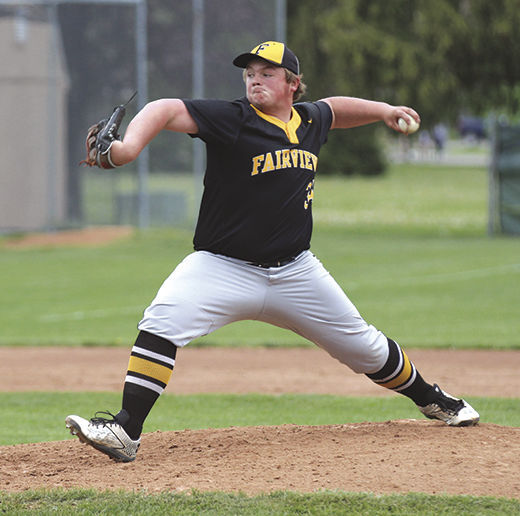 Fairview’s Austin Bostater delivers a pitch during the Apaches’ baseball game against Bryan on Tuesday at Sumpter Field. 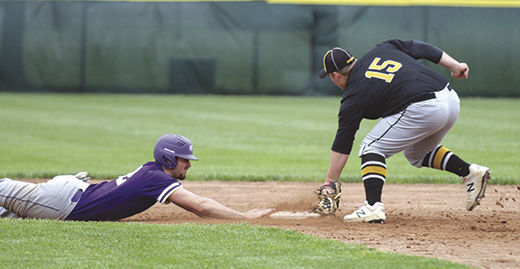 Fairview’s Bryan Lucas (15) tags second base as Bryan’s Titus Rohrer dives back during Tuesday’s baseball game at Sumpter Field. Rohrer was safe on the play. 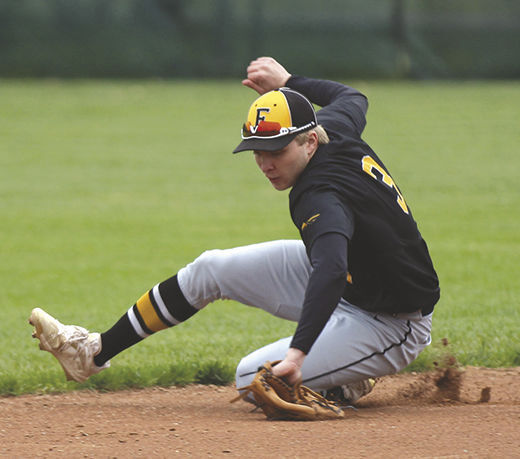 Fairview shortstop Cade Ripke slides to stop a ground ball during the Apaches' baseball game against Bryan on Tuesday at Sumpter Field.

Bryan’s Quinn Brown lays down a bunt during the sixth inning of Tuesday’s baseball game against Fairview at Sumpter Field.

Fairview’s Austin Bostater delivers a pitch during the Apaches’ baseball game against Bryan on Tuesday at Sumpter Field.

Fairview’s Bryan Lucas (15) tags second base as Bryan’s Titus Rohrer dives back during Tuesday’s baseball game at Sumpter Field. Rohrer was safe on the play.

Fairview shortstop Cade Ripke slides to stop a ground ball during the Apaches' baseball game against Bryan on Tuesday at Sumpter Field.

Bryan’s big hitters came through in the clutch with a late rally on Tuesday.

After Fairview scored a run in the top of the sixth inning to tie the game at 3-3, Bryan responded with with two runs in the home half and held on to edge the Apaches 5-3 in a nonleague baseball game at Sumpter Field.

“I’ll tell you what, (Fairview’s) a good team man,” Bryan coach Jeff Inselmann said. “Their record, it doesn’t matter what it is. They have talent, they have ability and we knew it was going to be a game of runs.

“... After they tied it on miscues, it’s been hurting us all year, we showed some guts and some toughness. Breven (Deckrosh), he’s our best hitter and huge shot off the fence to start us and Quinn (Brown) got a bunt down and we were able to manufacture off one of their mistakes. Keith Huard, proud of him man. He’s had a tough go here the last couple games and came up with a big hit to give us a little more cushion.”

Cade Ripke’s two-out hit down the right field line dropped and a loose throw back to the infield allowed Austin Lashaway to score from first. That completed the Apaches’ comeback as they tied it in the top of the sixth.

The Golden Bears, though, responded.

Deckrosh smashed a leadoff double to deep right field off Caleb Frank to open the inning. Brown laid down a bunt single, and a throwing error to first base allowed Deckrosh to score and give Bryan a 4-3 lead.

With two outs and Brown on third base, Huard smacked an RBI single to right center field to give the Golden Bears a two-run cushion.

“You’ve got to tip your hat to their offensive approach at the plate,” Fairview coach Andy Singer said. “They came in swinging right away and Caleb’s providing the power with his speed, and they put good contact to it and found the gaps.

“That’s what good hitting teams do. But we didn’t give up, down 3-0. We battled back, took it a little bit at a time.”

Brown tallied two hits, including a two-out, two-run single in the second inning to score Dylan Dominique and Titus Rohrer to give Bryan a 2-0 lead. Brown made his way around the bases on three passed balls from Fairview starting pitcher Jackson Grine to make it 3-0.

Nolan Kidston picked up the win on the mound for Bryan. He scattered six hits in six innings and allowed three runs. He had two strikeouts, three walks and hit two batters.

Kidston and Bryan reliever Ethan Psurny both came up with key pickoffs. With two on and one out in the fourth inning, Kidston fired the ball to Rohrer at first base to get Lashaway out.

Psurny, a lefty, picked off Adkins at first base in the seventh inning after Adkins led off the inning with a single. Psurny was credited with the save.

“(Kidston) wasn’t able to put anybody away, I think we only had a couple strikeouts all game,” Inselmann said. “But I thought he was working pretty quick in the count early on and they were super aggressive early on. His pitch count was low early, but then towards the end they started to work him a little bit harder.

“Psurny, man, he’s picked off a ton of guys. He’s got a great move and that was huge because it was kind of ‘here we go again’ after they get the leadoff guy on. But I thought overall defensively, we played a pretty good game. A couple mistakes that we still have to clean up but all in all, I thought our guys competed and really proud of them.”

Brown totaled two hits, three RBIs and two runs, while Rohrer and Clayton Rupp both had two hits for Bryan.

Frank, Adkins and Lashaway each singled and scored a run for Fairview.

Austin Bostater allowed just three hits as he pitched 3 1/3 innings of relief. He had two strikeouts and a walk.

“Austin’s always that guy that is around the plate,” Singer said. “He doesn’t have overpowering speed, but being from the left side, he’s got a little wrinkle there that can keep people off balanced. He does a good job with that.

“We’ll see him throw a lot more as the end of the season comes here. But that’s what he does, gets people to be out on front and roll some things over, pop some things up and that’s what good pitchers do.”

Fairview returns to action with a Green Meadows Conference game Friday at Hicksville, while Bryan will take on Toledo Central Catholic at home Thursday before closing Northwest Ohio Athletic League play at Archbold on Friday.

“This season, it’s been unique. Nothing’s come easy for us and our guys are working,” Inselmann said. “They keep competing, that’s what I just told them. Win or lose, they’ve been competing and proud of them and to see them rewarded for their efforts (is nice).”