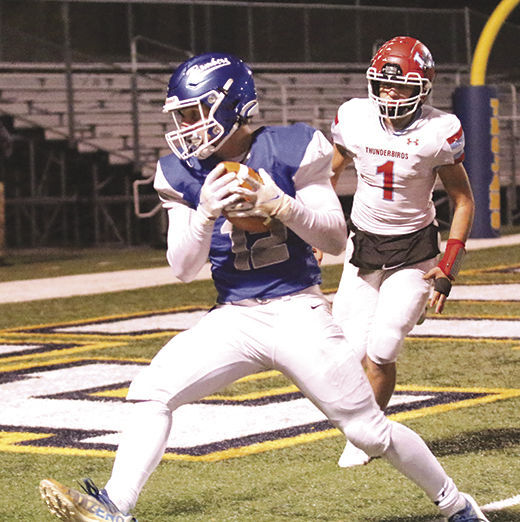 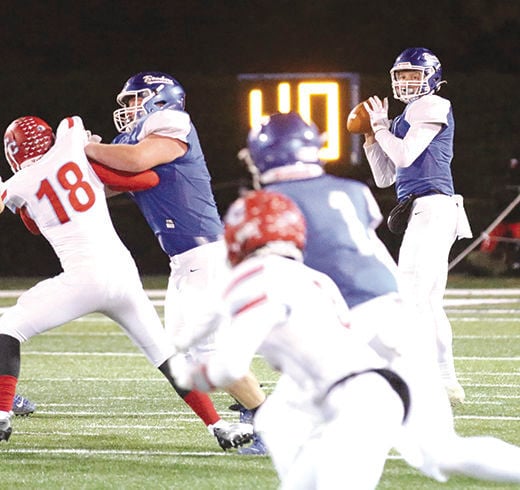 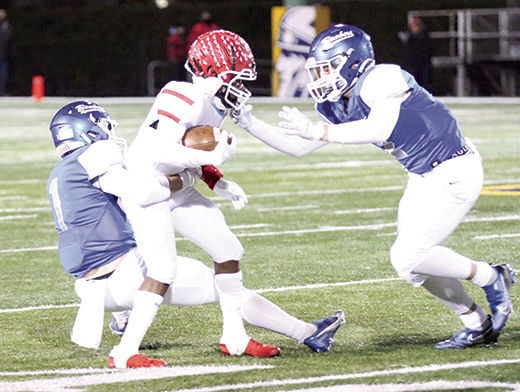 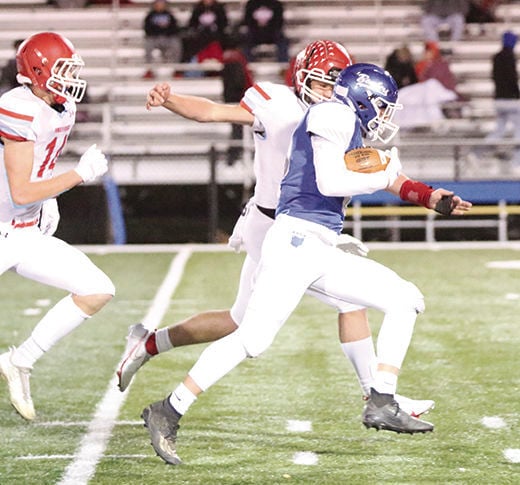 FINDLAY — Lima Central Catholic’s speed in all three phases of the game proved to be too much for Edon on Saturday.

The Thunderbirds erupted for 47 points in the first half, including a kickoff return for a touchdown and interception return for a score, as they ended the Bombers’ historic season with a 61-26 win in an OHSAA Division VII, Region 26 semifinal at Donnell Stadium in Findlay.

“Their speed’s a factor, no doubt,” Edon coach Bob Olwin said. “They block their quarterback keep really well, that was a big factor. We stopped ourselves with turnovers and so forth. Just didn’t think we competed real hard the first half and I thought the kids came out and tried to compete the second half.

“... (The Thunderbirds) were able to score a couple times in the second quarter and go up big and sort of took the wind out of our sails.”

Second-seeded Edon, which was playing in its first regional semifinal in school history, finished the season 11-2.

Third-seeded LCC (11-2) advanced to take on No. 1 Hopewell-Loudon (12-1) in the Region 26 final for the second consecutive season. Hopewell-Loudon beat No. 4 McComb 28-20 in a regional semifinal on Saturday.

LCC racked up 398 yards of offense, including 358 on the ground, and picked off Edon quarterback Drew Gallehue three times in a high-scoring affair.

A crucial moment in the game came at the end of the first quarter when the Bombers were on the verge of finding the end zone.

Gannon Ripke’s 40-yard kickoff return set up first-and-10 near midfield for Edon, and on the first play of the drive, Gallehue found Caden Nester down the middle of the field for a 36-yard gain.

After an LCC penalty gave Edon first-and-goal from the 6, Gallehue fired a pass to Ethan Steinke in the right side of the end zone. Steinke and LCC defensive back Jamarion Robinson both went for the ball and got a hand on it, but Robinson ripped the ball away for an interception and returned it 100 yards to extend the Thunderbirds’ lead to 20-6.

“I think that’s the biggest play of the game,” LCC coach Scott Palte said. “It’s (13)-6, they’re going in to score and we intercept it and run it back.

“All the sudden, now we’re up two touchdowns and that’s a huge back breaker (for Edon). Really, I felt like the game just changed from there. We kind of seized control of the game and really did a great job controlling the line of scrimmage and running the football. I thought our kids played really well.”

It was the second touchdown in the final two minutes of the first quarter for LCC. Traves Hoyle Jr. returned a kickoff 84 yards for a touchdown and a 13-7 LCC lead with 1:54 left in the frame.

The Thunderbirds continued their momentum with 27 points in the second quarter. Keiron Bailey’s 30-yard touchdown run made it 26-6 LCC with 9:31 left, and after Hoyle Jr. picked off Gallehue, LCC quarterback Carson Parker capped off an eight-play, 68-yard drive with a 19-yard touchdown run to make it 33-6.

Gabe Cira intercepted Gallehue near midfield and returned it to the Edon 28 with 16 seconds left, and on the first play of the drive, Parker found Hoyle Jr. for a 28-yard touchdown as the lead ballooned to 47-12.

“Our kids played fast tonight and really got out in the open and ran hard and ran fast,” Palte said. “Our O-line did a great job, there were some huge holes out there and they got on our receivers, our slot guys. Everybody whose job was to block tonight blocked, so it was a really great team effort offensively and defensively.”

Gallehue found Ripke for a 15-yard touchdown and hit Hayden Dye for the 2-point conversion to make it 47-20 late in the third quarter, but Parker bolted for 49 yards for a touchdown to push the Thunderbirds’ lead to 54-20. Gallehue hit a diving Henley Dye in the left corner of the end zone for an 8-yard touchdown early in the fourth, but LCC responded again as Bailey’s 1-yard touchdown run with 6:19 left gave the Thunderbirds a 61-26 advantage.

Parker was 3-of-4 passing for 40 yards, one touchdown and one interception. Bailey racked up 99 rushing yards and two scores on 16 carries.

Gallehue finished 25-of-45 passing for 327 yards, three touchdowns and three interceptions. He found Henley Dye for a 4-yard touchdown on the Bombers’ second possession to cut LCC’s lead to 7-6 with 2:07 left in the first quarter.

Ripke, who was nearly impossible to bring down with the ball in his hands throughout the entire game, hauled in nine catches for 157 yards and one touchdown. He had four kickoff returns for 152 yards and a touchdown as well.

Although Edon was able to put points on the board and rack up yardage in its high-powered passing attack, the Thunderbirds executed well with open-field tackling and making the Bombers earn their yards.

“Their quarterback is incredible and they have some great weapons. I was really happy to slow them down,” Palte said. “We were kind of hoping that we could keep them in the 20s and we’d be able to control the ball enough to score enough points to beat them. It was just our night, we were fortunate enough to hit the hole and control the line of scrimmage and things went our way.”

Saturday’s game marked the end of the best season in school history for Edon’s football program.

The Bombers made their furthest advancement in the playoffs, won their first Toledo Area Athletic Conference title in school history and recorded back-to-back postseason wins for the first time. Their 11 wins also set a school record for victories in a season.

“A loss is a loss, so you can’t feel good about that. But we did a lot of positives for the program and everything,” Olwin said. “Got a bunch of dejected kids and they shouldn’t be because we have had a fine season that I don’t think too many people thought we were going to.”

Gallehue and Ripke joined elite company in the OHSAA record books as well.

Gallehue finished the season with 4,977 passing yards, which is unofficially ranked sixth in OHSAA history according to its website. Only Kenton’s Ben Mauk (2001 and 2002), Maty Mauk (2010 and 2011) and Grant Sherman (2013) have thrown for more passing yards in a season.

Gallehue also finished the season with 58 passing touchdowns (10th in OHSAA history), and for his career, he ranks seventh with 11,262 passing yards and fourth with 142 passing touchdowns. He trails only Maty Mauk (219), Ben Mauk (178) and current Cincinnati Bengals quarterback and former The Plains Athens standout Joe Burrow (156) for career passing touchdowns.