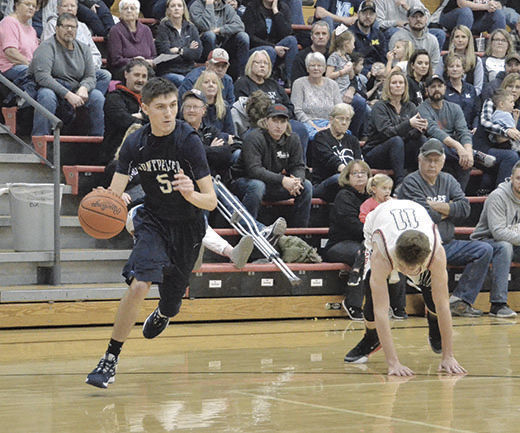 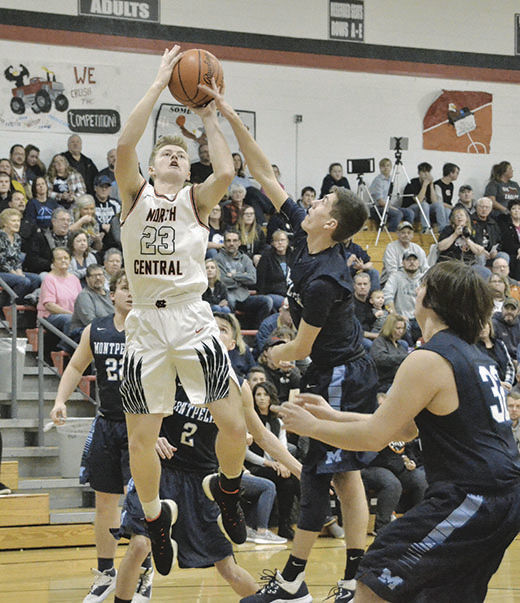 PIONEER — After averaging 40.8 points per game over its first 11 contests, the Montpelier boys basketball team’s offense broke out of its shell to lead the Locomotives to a 61-55 road win over North Central on Thursday night.

“I’ve been waiting on that all year,” Montpelier coach Justin Houk said with a laugh. “We’ve been averaging 30-something points per game, so it was nice to see us up there pushing into the 60s. Confidence goes a long way when you’re playing basketball, so hopefully, that confidence will continue to grow and our offense will continue to grow.”

The Locomotives offense came out of the gates on fire, scoring 18 points in the first quarter, making three 3-pointers, one apiece from Tylor Yahraus, Thomas Jay and Rowen Beck. Senior forward Austin Peffley made a layup from a post move with 35 seconds left in the quarter, and Montpelier headed to the second period with an 18-14 advantage.

Houk said the Locomotives’ teamwork and ability to find open shooters were key factors in the big first quarter.

“The boys were sharing the ball well,” Houk said. “We’ve had games where we didn’t have too many assists, but I thought a lot of our open 3’s tonight were coming off guys’ drive-and-kick assists. It was good offense.”

Montpelier extended its lead to as many as 11 points, as a layup from Yahraus, plus the ensuing free throw, gave the Locomotives a 28-17 lead with five minutes left in the half. North Central responded with a 14-3 run, as an elbow jumper from senior point guard Jack Bailey cut the Eagles’ deficit to 31-30 with 2:07 left. Montpelier freshman Garrett Walz made a midrange shot with a minute left to extend the Locomotives’ lead to 37-33, and that was how they would enter the intermission.

A 3-pointer from the left corner by Zack Hayes brought North Central back to within two points of the lead at 44-42 with 2:06 left in the third quarter. From that point, Montpelier ended the third on a 5-0 run, capped off by three points from Blake Altaffer, to head into the final period with a 49-42 lead.

The Locomotives started off the fourth quarter playing keep-away, as North Central wasn’t able to gain control of the ball for the first 3:11 of the period. A Hayes layup got the Eagles back to within six points, but Montpelier pulled away with a 6-0 run, capped off by a pair of Altaffer free throws. North Central scored seven points in the last minute, but the game was out of reach, and Montpelier won 61-55.

Houk said the game was the result of his team finally coming together as one unit. Every basket or defensive stop for the Locomotives was met with loud support from the bench, and the team came in wanting to avenge its 45-40 loss to North Central on Dec. 5, 2019.

“We had a close one with them, and now to come on the road and steal a win feels good for the team,” he said. “I think we’re starting to really come together as a team. We’ve got shirts that say ‘family’ on them. We preach about family. When you spend six days a week together for five months straight, you become a family.”

Yahraus and Altaffer led the Locomotives with 15 points apiece, while Jay added nine points and Alex McCord pitched in with eight points. After winning three of its last four games, Montpelier’s record is now 4-8 on the year overall, including 3-5 in the Buckeye Border Conference. The Locos will host Edgerton (6-6, 1-2 Green Meadows Conference) today.

Bailey led North Central with 18 points, while Hayes followed closely behind with 14. North Central has lost eight of its last nine games, and currently sits at 6-8 on the year overall and 4-4 in the BBC. The Eagles will travel to face Hicksville (9-3, 2-1 GMC) today.