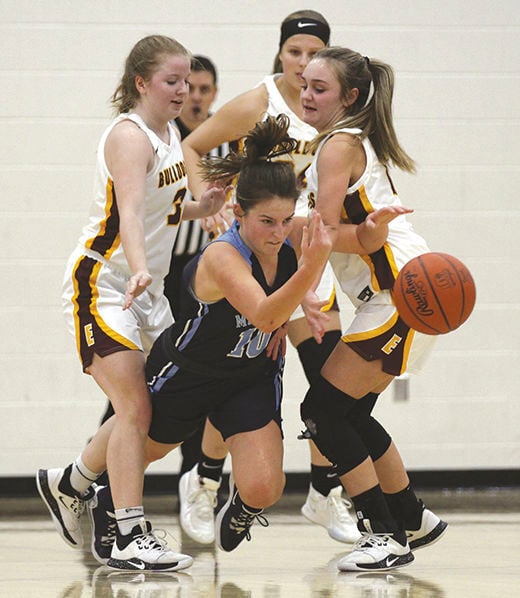 Montpelier’s Emily Fritsch (10) passes the ball after getting a steal between Edgerton’s Brianna Wickerham (3) and Addie Cape during Saturday’s girls basketball game at Edgerton High School. 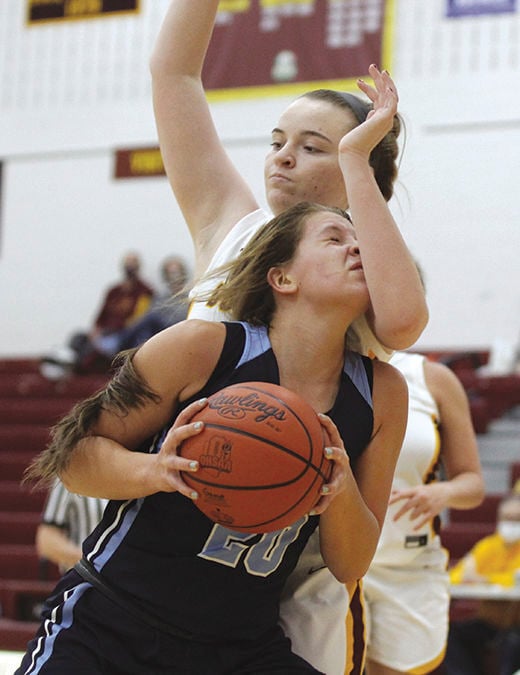 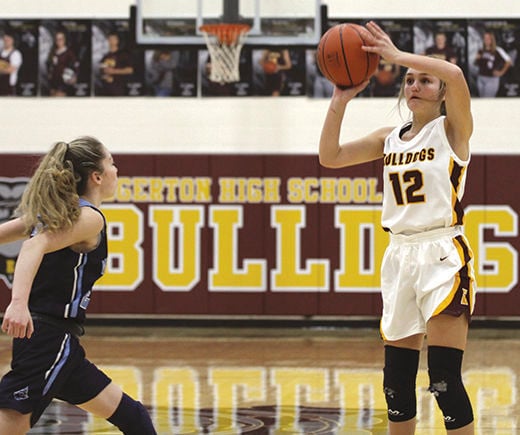 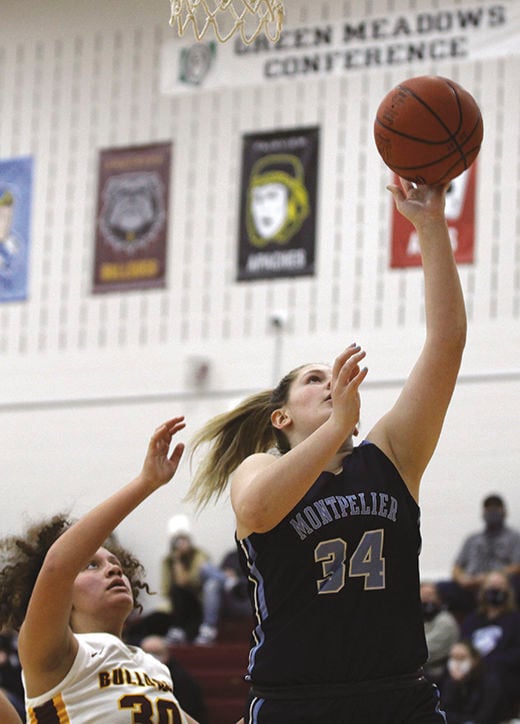 Montpelier’s Emily Fritsch (10) passes the ball after getting a steal between Edgerton’s Brianna Wickerham (3) and Addie Cape during Saturday’s girls basketball game at Edgerton High School.

Unfortunately for the Bulldogs, the Locomotives got rolling as well.

Montpelier went on a 25-3 run from late in the third quarter to midway through the fourth to pull away for a 64-40 victory at Edgerton High School.

“I give all the credit to the kids to not stop playing, they never gave up,” Edgerton coach Nathan Davis said of the Bulldogs. “That was a plus, but I think we just ran out of a little steam.

“Montpelier came right back and got three or four baskets, bang bang bang, and the score is what it looks like.”

Montpelier (6-1), which won its fifth straight game, had four players score in double figures in combining for 62 points.

After leading 26-14 at halftime, the Locos found themselves in a battle early in the third.

Edgerton (1-6) opened the frame on an 8-0 run to pull within four. Rylei Moreno scored in the paint, Taylor Smith found Addie Cape for a 3-pointer and Brianna Wickerham converted a 3-point play — all in the first 90 seconds.

That’s when Montpelier made its run.

McCord made 1-of-2 free throws and Trinity Richmire buried a long step-back jumper as the lead expanded to eight. Abbigail Herman made a free throw for Edgerton, but Fritsch scored in the paint off Bumb’s pass and Bumb drained a 3-pointer at the buzzer as the Locos extended their lead to 43-31.

Page had three buckets in the paint, Bumb drove the baseline and converted a floater and McCord tallied five points, including a tough 3-point play after Montpelier grabbed multiple offensive rebounds, as the lead swelled to 60-33 with 3:35 left.

“Overall, the post play was good for Montpelier, and I think what really makes that good is their guards,” Davis said. “They can drive and get that post play open for them, but Montpelier works well together with the in and outside game, and when you have shooters outside, that does open up the inside.”

Cape, a 5-7 sophomore, drained three 3-pointers and had a team-high 11 points for Edgerton. Moreno added eight points and a team-high six rebounds; Schroeder had six points; and Smith and Herman both chipped in five.

“Give Edgerton credit tonight, it’s a team that’s scrappy and they get all those loose balls and all those second chance points and things like that,” Montpelier coach Mike Bumb said. “They made a few shots and pleased with how we came out in the second half, though.”

Montpelier dominated the boards 43-27. The Locos forced 23 turnovers and committed 11.

Edgerton, which last played on Dec. 22, had a season-high scoring output on Saturday.

“I think girls are finally stepping up, getting that confidence to shoot that shot,” Davis said. “I encourage all open (shooters) to get that ball up and we’ve got to score. I thought what we did well was getting that ball inside in that third quarter, that start of the fourth quarter, and kicking it back out. That’s where our 3s happened.”