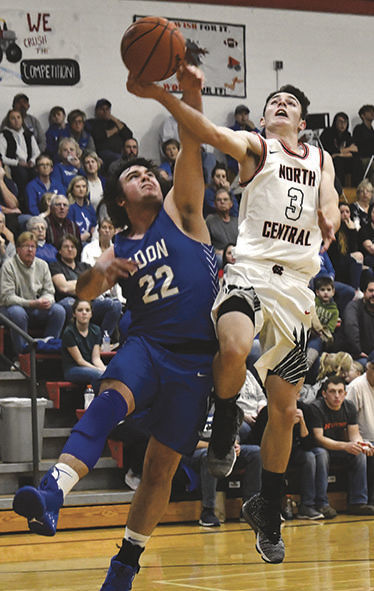 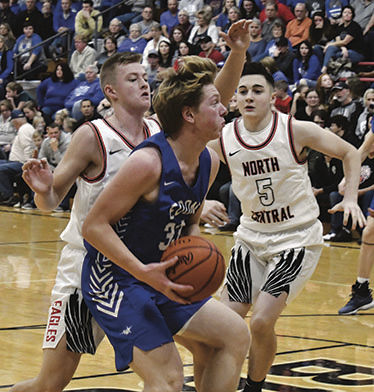 Edon’s Drew Gallehue goes up for a shot during the Bombers’ 64-47 loss to North Central on Friday night. Gallehue finished with 13 points. GLYN BUNTAIN/Staff

Edon’s Drew Gallehue goes up for a shot during the Bombers’ 64-47 loss to North Central on Friday night. Gallehue finished with 13 points. GLYN BUNTAIN/Staff

North Central (1-0, 1-0 Buckeye Border Conference) got out to an early advantage, scoring the first 10 points of the game, with the first seven coming from Hayes. Edon (0-1, 0-1) would eventually pick up the pace, with a 3-pointer and an elbow jumper from point guard Tatum Schaffter. Bailey picked up a defensive rebound and went coast-to-coast for a layup to give the Eagles a 16-7 advantage after the first quarter.

North Central got its lead up to 14 with 4:17 left in the second quarter after a 3-pointer from Landon Patten. The Eagles pushed that lead further, as another 3-pointer, this time from senior Manny Cruz, gave them a 33-14 lead with less than a minute remaining in the half. After a three-point play from Edon’s Drew Gallehue ended the half, the Eagles entered the intermission up 33-17.

North Central coach Chris Fidler attributed much of the Eagles’ first-half success to the team’s energy out of the gate.

“I thought we played very well, played as a team and shared the basketball,” Fidler said. “It was just phenomenal to watch these guys play with so much heart tonight. That’s one thing we’ve talked a lot about: playing with a lot of energy. I feel like that helped us defensively, and that defense helped create better offense for us.”

The pace of the game slowed down a bit in the third quarter, but a deep step-back 2-pointer from Drew Gallehue sent the game into the final period with North Central hanging onto a 47-30 lead.

North Central ran into a bit of an issue in the early minutes of the fourth, as Bailey headed to the bench with his fourth foul, and the Eagles called a timeout after a Cassius Hulbert layup cut the lead to 14. The lead would be cut to 12 with 3:17 left after a layup from Schaffter, but Bailey returned to the game to make four free throws over the next minute to ice the game.

For Fidler, having his senior point guard be able to avoid fouling out and make clutch plays down the stretch was invaluable.

“Jack does so many things for this basketball team,” Fidler said. “He handles the ball for us, and tonight, he showed his composure. So many of the other guys feed off of what Jack does for us. For him to stay on the floor and battle that foul trouble, it says a lot about him.”

On Edon’s side, coach Andrew Kiess said he saw some things he’d like to improve on and some positives he would like to build on, but he wanted to keep things in perspective for the Bombers, who started practice a few weeks later after a playoff run for the football team, saying the only direction they can go from here is up.

“Our team battled really hard in the second half,” Kiess said. “I’m proud of their effort and resiliency and how they didn’t quit. Early on, we just didn’t do enough things well enough. The best thing about us is we’re only going to get better. We’re not going to stop working or improving, so you wish you could win them all, but you can’t. You just have to keep battling and going forward and move to the next game.”

North Central will look to keep its strong start to the season going when the Eagles travel to face Montpelier (0-1, 0-1) next Thursday. Edon will try to secure its first win of the season when it hosts Maumee Valley Country Day next Tuesday.