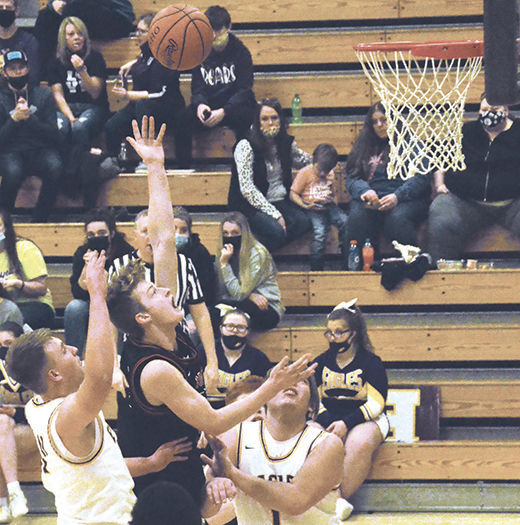 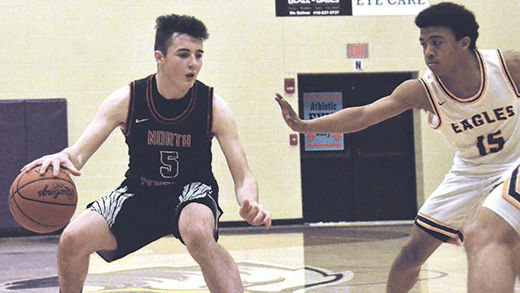 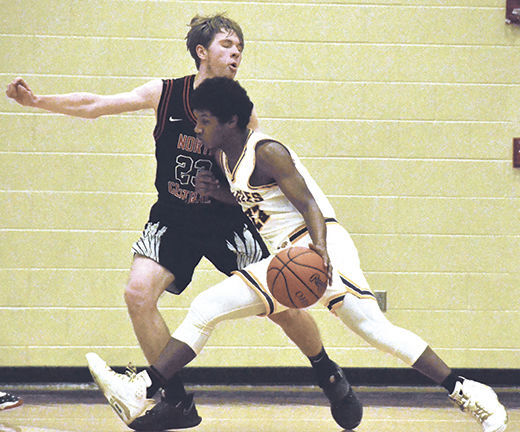 FAYETTE — In a back-and-forth game where neither team had more than an eight-point lead, it was North Central which came out on top.

“Our offense is starting to click a little bit,” North Central coach Chris Fidler said. “Earlier in the year, we don’t win these because we’re not scoring like we are. We just got guys stepping up and putting the ball in the hole — and it makes things go a little bit better.”

North Central started the game hot. A Zack Hayes layup, Joey Burt 3-pointer and a Colin Patten short-range jumper and layup off his own steal gave North Central a 9-3 lead with 5:52 left in the first quarter, and caused a Fayette (8-12, 4-8) timeout.

After the timeout, North Central extended its lead to 16-8 with 2:32 left thanks to a Hayes putback, another Burt 3 and a Landon Justice layup.

But after that spurt, Fayette started to get it going. It outscored North Central 21-11 — including nine points from Elijah Lerma and eight from Tanner Wagner — and took a 29-27 lead with 2:55 left in the first half.

The third quarter was all Fayette, though. While North Central held a lead up until there was 1:07 left in the third quarter, Fayette outscored its foe 14-6 — and outrebounded them 11-3 — in the frame and held a 43-42 edge thanks to a Phillip Whiteside 3. Fayette also limited North Central to 1 of 8 from the floor in the quarter.

“We were attacking the basket, we hit a couple 3s which opened the game a little bit,” Fayette coach Todd Mitchell said. “Offensively, I thought we were pretty efficient.”

But in the final eight minutes, North Central got out of its third-quarter rut. The two teams traded the lead six times in the first 5:05 of the fourth quarter, with Fayette getting a 56-55 advantage thanks to a Kaden Frenn layup.

That was the last time Fayette held the lead.

Coming out of a Fayette timeout, Pettit and Quin Burt hit back-to-back 3s to gain a 61-56 lead with 1:50 left. And while Lerma (layup) and Eli Eberly (short-range jumper) made it 61-60 with about 31 seconds left, Hayes and Cohen Meyers both nailed 2-of-2 free throws — with North Central hitting 10 of 11 in the fourth quarter — to secure the victory.

Hayes had a near double-double, dropping a game-high 23 points and grabbing a team-high nine rebounds while adding two blocks and two steals. Patten added 10 points, five boards and two steals — all in the first half. Pettit (six rebounds) and Meyers (five rebounds) each chipped in nine points.

North Central will next face No. 11-seeded Edon (9-8) as a No. 13 seed in a Division IV Defiance District sectional semifinal 7 p.m. Wednesday at Edon High School.

“It was a very good team win all the way around,” Fidler said. “Zack played extremely well, (had) kind of a bummed ankle from (Friday) night (against Montpelier), tweaking it a little bit. Colin Patten stepped up, played huge minutes for us. We had Joey Burt get into some foul trouble and his brother Quin stepped in and played some huge minutes.

“And of course, Ben Pettit has stepped up huge for us the last couple weeks. (We) found that corner shooter we’ve been looking for throughout the year — he’s played some good games scoring-wise for us.”

“We score 60 points, we need to win those games. We got to play better defense, we got to rebound — we gave up quite a few offensive rebounds and they scored on those,” Mitchell said. “I thought offensively we were pretty efficient. We attacked the basket.

“Again, we gave up way too many points, and we need to be better defensively than that.”