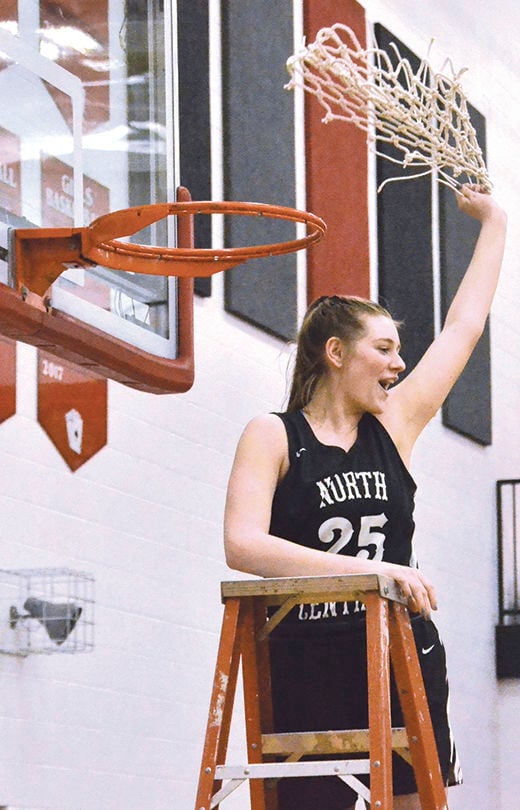 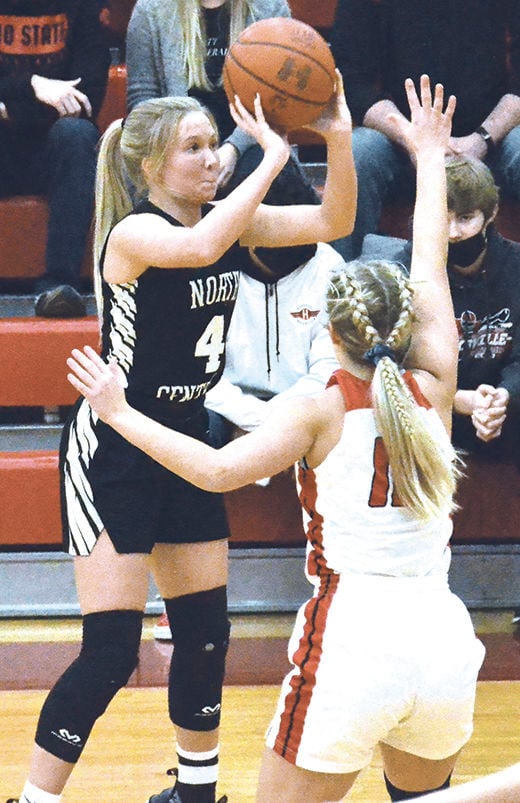 The No. 8-seeded Eagles outlasted No. 6 Hicksville — which didn’t fall behind by more than five points until the final seconds of the game — and used a rebounding advantage to get a 43-36 sectional final win Saturday at Hicksville High School.

“It’s talking about our culture I think and just developing that attitude that we can compete with people, and having that confidence going into these games,” North Central coach Greg Waidelich said. “... And it might’ve not looked like that the entire time based off how they executed, but I thought we did everything we possibly could to prepare for this moment. And it kind of showed when it got to that pressure situation — we started almost executing better than we had at the beginning of the game.

“I just think it speaks to the girls’ mindset and preparation for these moments because we created a culture of, ‘Hey, we can compete with anybody.’”

Before North Central took a lead, however, Hicksville was in control. The Aces held a lead for majority of the first quarter after making 5-of-9 shots — with six points coming from Kennedy Phillips — to take an 11-10 lead going into the second frame.

“(We were) just attacking,” Hicksville coach Josh Freese said. “And that’s what we got away from really the rest of the game — spacing the floor and attacking and trying to get into the paint. A lot of times we tried to look for scoring opportunities too early in our offense, rather than let the continuity work.

“That’s something that we’ve got to continue to work on. But offensively, we’re starting to find our groove as a group.”

In the second quarter, it was the Eagles who ended with a one-point advantage. They outscored Hicksville 12-10 to take a 22-21 lead going into halftime, with Madison Brown, Kendal Bonney and Kendee Hollstein each having a team-high five first-half points.

North Central also held a 23-11 first-half rebounding edge over the Aces, with a decent chunk of them being offensive boards. The Eagles outrebounded Hicksville 43-25 overall on the night.

“Offensive rebounding just boils down to a lot of effort, and our girls just went and went and went and went,” Waidelich said. “And I think it’s really easy when you miss shots to get discouraged ... But instead of hanging our heads when we missed (shots), we were going to get them.

Hicksville, though, had a quick answer to start the second half. Avery Slattery hit a 3-pointer 1:18 into the third quarter to give the Aces a 24-22 lead.

But that was the last time Hicksville held a lead. Brown and Lauren Balser, who are both 5-foot-5 juniors, outscored the Aces 11-5 the rest of the third quarter.

Brown hit a 3 and layup off her own steal within a 43-second span to give the Eagles a 30-27 lead. Balser nailed her first third-quarter 3 with 5:36 to go to give North Central a 25-24 lead and her second with 2.3 seconds to extend the lead to 33-29 going into the final eight minutes.

“I was feeling pretty good about my shot at the time, so I was willing to put it up,” Balser said of the last-second 3-pointer. “And I would’ve trusted any of my teammates to take that shot, but we really needed to get the edge right there.”

The final eight minutes turned into a free-throw contest, with only three field goals being made between both teams. The Eagles hit 8-of-18 free throws, while the Aces made 3-of-6.

“We got a little panicked at the end there. The pressure really speeds us up,” Balser said. “But I think we handled it well towards the end of the fourth quarter. We were holding on tight to the ball and getting those fouls called and going to the line.”

Brown nearly had a double-double, dropping game highs in points (14) and boards (nine). Balser added 11 points and three rebounds, while Bonney finished with seven points and seven boards. Hollstein had six points and snatched eight boards, and Burnett contributed five points and seven rebounds to round out North Central’s scoring.

“As we’ve all played together more and more — we’ve all been on varsity for quite a while — we’ve learned our spots on the floor and what we can do the best,” Balser said. “Kendee and Kendal are insane in going for the rebounds, they’re insane in the post. And our guards, they’re all looking to give it to each other and take our shots and do what we can do.”

Molly Crall had a team highs in points (12) and rebounds (five) for Hicksville. Slattery finished with nine points, while Phillips had eight.

North Central will now get ready for Convoy Crestview. But, the Eagles will also enjoy this sectional title — and continuing to build the program’s culture.

“It’s amazing, especially coming from such a small program,” Balser said. “We go through a lot of obstacles to get where we are and creating that culture in our school.”