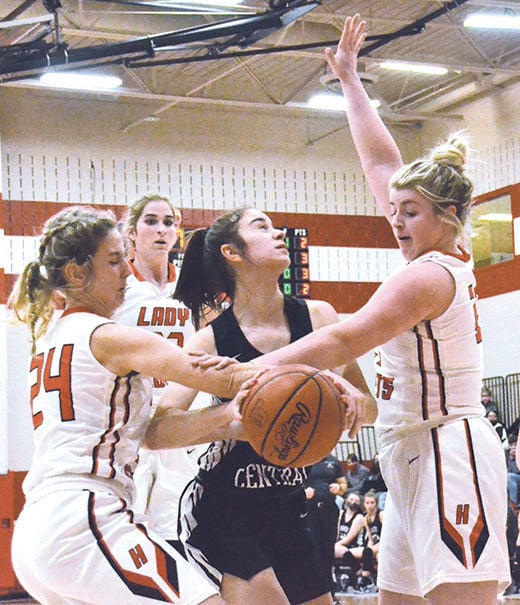 WEST UNITY — In the regular season, Hilltop girls basketball beat North Central in both of the teams' Buckeye Border Conference games — 31-23 on Dec. 1 and 46-36 on Jan. 15.

But in a Division IV sectional semifinal on Wednesday night, the No. 8-seeded Eagles stopped it from being a season sweep.

North Central (10-10) will face No. 6 Hicksville (9-13) at 7 p.m. Saturday at Hicksville High School for a chance to try and get their second sectional title in the last three years. The Cadets finished the season 13-7 and 10-2 in BBC play, getting second place in the league after finishing the previous three years last in the conference.

"They always say it's hard to beat a team three different times, and I don't know why people say that, but I'm glad it's true," North Central coach Greg Waidelich said. "And I think what was frustrating about our first two losses to them, was we didn't think we put together an entire game — and I don't think we put together an entire game tonight. It was sloppy.

"But the girls did what we wanted them (to do). We didn't stray from the gameplan just because it wasn't working. We had talked about limiting fast-break opportunities and limiting offensive rebounds, and I think we did a really good job of that... We told them, 'If you do that, you're going to have a great chance to win.'

"Luckily, we started to execute a little bit better offensively in the second half and got some looks to fall."

In the first half, Hilltop held the advantage. The Cadets started the game on an 8-0 run, with junior Leanna Baker hitting two layups to lead the way, and held that lead with 1:36 left to go in the first quarter.

North Central ended the last 50.9 seconds of the first quarter on a 5-0 run — a Lauren Balser 3-pointer and Madison Brown floater — and slimmed the lead to 8-5 going into the second quarter.

Nothing much changed in the eight minutes before halftime.

The Eagles went 2 of 11 from the floor, including 1 of 8 from beyond the arc, and Brown hit 1-of-2 free throws. On the other side, Hilltop went 2 of 7 with Jayma Bailey hitting its lone 3-point attempt, while Sara Barnum knocked down two free throws to take a 15-11 lead at halftime.

While the Eagles had a 5-4 third-quarter advantage with 3:22 left in the frame, the Cadets still held a 19-16 lead thanks layups from Baker and Kodi Brenner. But Balser's second 3 of the night and two Isabelle Burnett free throws in the last 2:12 gave North Central a 21-19 edge heading into the final quarter.

"(Our kids) just kept getting after it," Hilltop coach Troy Grime said. "And they never quit. All year they haven't quit. Even when we had bad games, they've never quit.

"We just couldn't get that corner turned and stretch that lead out in the first half, or even in the third quarter. We're thinking if we can get it up to 10 or 12, which these girls are more than capable of doing that in a two-minute span, we'd be all right. But that didn't happen tonight."

"It's always nice to get the free ones," Waidelich said. "And I think it was really nice, because we had a couple girls who have had some off games, and they just showed how good of shooters they are.

"It was just nice to see them knock down those pressure ones when it really mattered."

Brown dropped a game-high 14 points — with seven of them coming from the foul line (7 of 8) — and grabbed six boards and two steals.

"So the girls were definitely anticipating kind of seeing those openings and making plays off of each other, which is what we have to do against a zone."

The Cadets' 13 wins were also the most wins by the program then the last four years combined (12).

"The season was obviously great for us, considering where we were two, three years ago, with no wins, then one win, then six and 13," Grime said. "I told them, 'You've got to be proud.'"

Even though the Eagles beat the Aces 43-26 on Feb. 9 at Hicksville, Waidelich said "You never want to look at the outcome of that game as the indicator of the next one."

"We got to prepare even harder for the next game and just going out and executing," he said. "They've got some great players, they're going to knock down shots and they're going to get to the basket. So we got to slide down and set our feet and be ready for a battle."