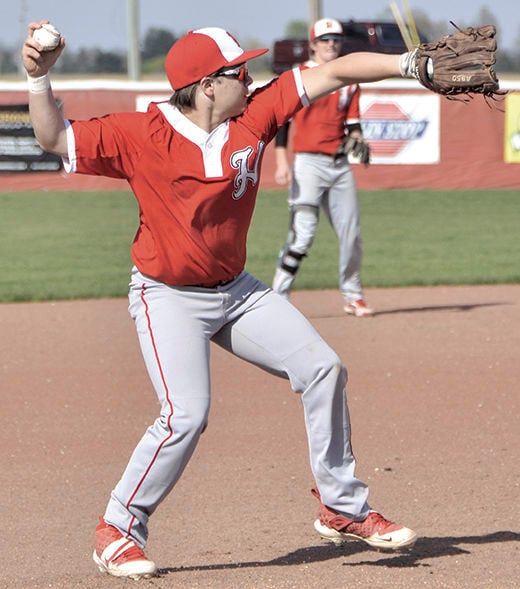 Hilltop’s Andyn Haynes gets ready to throw to first base during Monday’s nonconference baseball game against Hicksville at Hilltop High School. 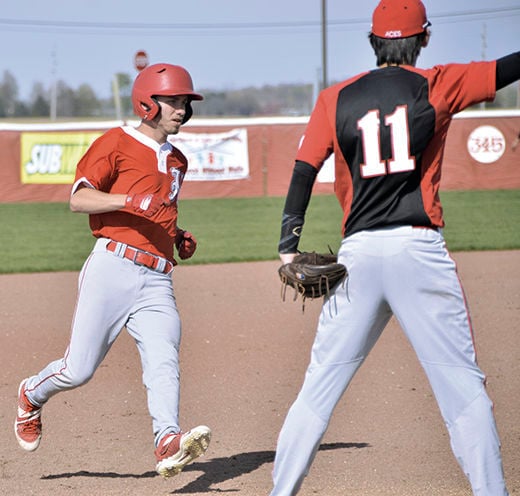 Hilltop’s Andyn Haynes gets ready to throw to first base during Monday’s nonconference baseball game against Hicksville at Hilltop High School.

DEFIANCE — Montpelier had a 4-2 lead against Tinora heading into the bottom of the seventh, but the Rams rallied and scored three runs to hand the Locomotives a 5-4 nonconference baseball loss on Monday at Tinora High School.

Tylor Yahraus drove in two runs and smacked a hit for Montpelier (12-4). Gavin Stratton had a hit and two walks, while David Bowman added two walks and Ayden Santos an RBI.

Collin Crisenbery got the start on the mound for the Locos. The senior righty tossed five innings and had two strikeouts.

EDGERTON — Pettisville broke a 3-3 tie in the top of the seventh with four runs — including a three-run homer by Josh Norr — to give the Blackbirds a 7-3 nonconference win over Edgerton on Monday at Bob Peverly Field in Edgerton.

Noah Landel and Warren Nichols both slapped two hits for the Bulldogs (8-10), while Landel also drove in a run. Gannon Ripke (one RBI) and Corey Everetts each added a single.

Ripke got the loss on the mound. The junior lefty threw 6 1/3 innings and allowed seven hits, seven runs (all earned) and five walks. He also fanned two.

Adding to his home run, Norr also singled and crossed the plate twice for Pettisville (9-3). He totaled four RBIs on the night. Josh Horning (two singles) and Gideon Myers (single) both scored twice.

Myers earned the win. He tossed six innings and allowed six hits, three runs (one earned) and three walks and struck out two. Norr pitched a perfect bottom of the seventh to get the save.

The Blackbirds totaled eight hits and four errors while Edgerton had six hits and zero errors.

WEST UNITY — Hilltop had a 2-1 lead after the first inning, but Hicksville’s offense got hot as the Aces rattled off 13 runs the rest of the way to give the Cadets a 14-5 nonconference loss on Monday at Hilltop High School.

Thomas McCoy doubled, walked and drove in two runs for Hilltop (3-13). Ethan Varney singled, scored once, walked once and had an RBI, while Wade Wagner two RBIs.

Ian Hoffman got the loss on the mound. The junior righty pitched 3 1/3 innings and allowed 10 runs (five earned), seven hits and five walks. He also struck out two batters.

Klima got the win on the mound. The sophomore lefty fired 10 strikeouts and allowed five runs (two earned), four hits and four walks.

Fairview shut down by Defiance

DEFIANCE — Fairview’s bats couldn’t figure out Defiance’s Braydn Shaw, as the righty tossed a one-hitter against the Apaches to help give the Bulldogs a 2-0 nonconference win on Monday at Defiance High School.

Austin Bostater got the lone hit for Fairview (5-9). Bostater also drew a walk, while Nathaniel Adkins and Bryan Lucas were hit by pitches.

Bostater also got the loss on the mound. The senior threw five innings and allowed five hits, two runs (zero earned) and one walk. He also struck out three. The Apaches also committed two errors.

Jacob Howard slapped three singles in three at-bats in the cleanup spot for Defiance (11-3). Drew Kellermeyer added a run and single, while Camden Roth drove in a run.

Shaw also only allowed one walk and fanned 9-of-27 batters faced.