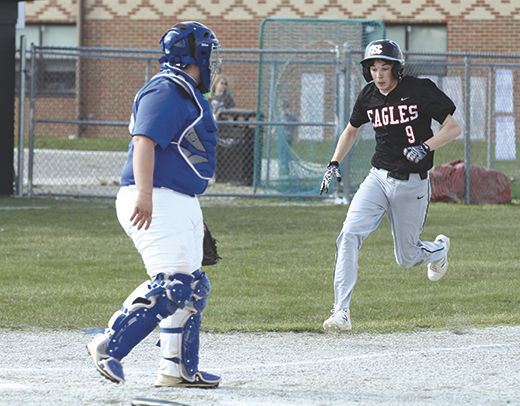 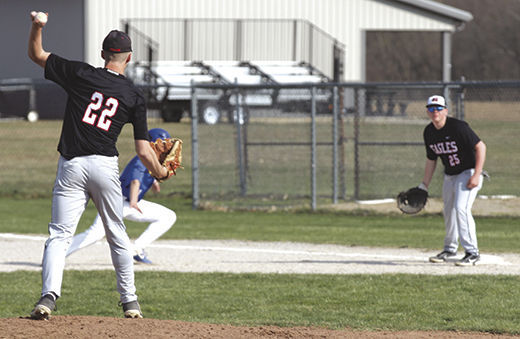 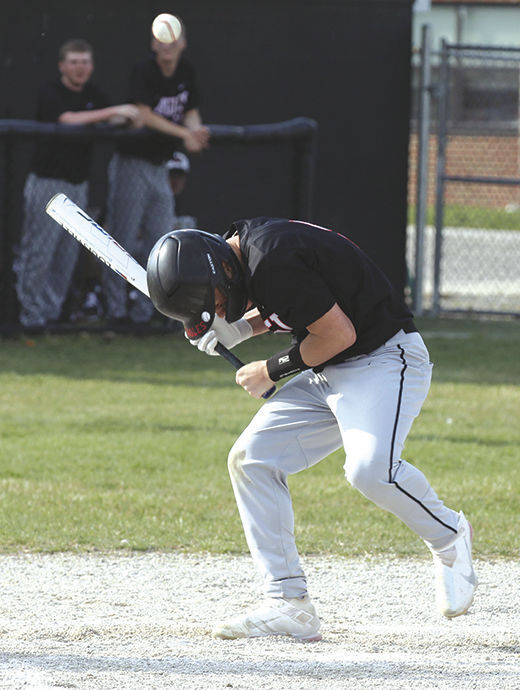 North Central's Clayton Douglass gets hit by a pitch during the Eagles' Buckeye Border Conference baseball game against Stryker on Tuesday at North Central High School.

North Central's Clayton Douglass gets hit by a pitch during the Eagles' Buckeye Border Conference baseball game against Stryker on Tuesday at North Central High School.

PIONEER — North Central’s baseball team erupted for 22 runs in the first two innings Tuesday as the Eagles picked up a 23-4 win in five innings over Stryker in Buckeye Border Conference play at North Central High School.

Zack Hayes picked up the win on the mound after allowing two runs (both earned) on three hits in three innings pitched. He had four strikeouts and two walks.

Payton Woolace led Stryker (0-2, 0-2 BBC) with a double, single and an RBI. Jacob Cadwell added a double and an RBI.

WHITEHOUSE — Bryan got an early 2-0 lead after the top of the first inning, but couldn’t hold on as Anthony Wayne scored eight runs in six innings to hand the Golden Bears an 8-2 nonleague baseball loss on Tuesday at Anthony Wayne High School.

Breven Deckrosh got the loss on the mound. He pitched five innings and allowed five runs (one earned), three hits and five walks, while striking out four. Brown also pitched an inning and allowed one hit, one walk and three runs.

Garrett Pike got the complete-game win for the Generals, striking out 10 and only allowing two runs, two walks and six hits in the process. Pike also tripled for one of Anthony Wayne’s four hits.

Connor Towers had the lone hit for the Bombers (1-6, 1-2 BBC). Konnor Prince took the loss on the mound after allowing 10 runs (three earned) with six walks and two strikeouts in 4 1/3 innings pitched.

FAYETTE — Hilltop took advantage of 10 Fayette errors, scoring 15 runs on 12 hits to give itself a 15-7 Buckeye Border Conference baseball victory on Tuesday at Fayette High School.

Andyn Haynes and Ian Hoffman each contributed two RBIs and two runs for the Cadets (2-4, 2-1 BBC), with Hoffman also smashing a single and a double. Raace Haynes smoked three hits, including a triple, and crossed the plate three times. Lucas Jacobs had a triple and two runs, while Chase Whitman singled and doubled.

Connor Schlosser picked up the win in relief for Hilltop, going 5 1/3 innings and striking out seven. He also only allowed three hits, two runs (one earned) and one walk in 20 batters faced.

Tanner Wagner was perfect from the plate for the Eagles (0-3, 0-1), going 4 of 4 with two singles, two doubles, two RBIs and two runs.

SHERWOOD — Wauseon outscored Fairview 8-2 over the last two innings to come away with a 12-8 nonleague baseball win on Tuesday.