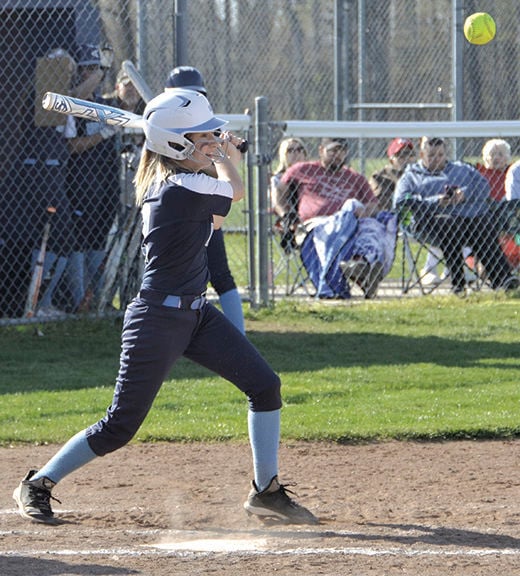 Montpelier’s Gabby Steffaneli watches the ball after making contact during Monday’s nonconference softball game against Antwerp at the Superior Athletic Complex in Montpelier.

Montpelier’s Gabby Steffaneli watches the ball after making contact during Monday’s nonconference softball game against Antwerp at the Superior Athletic Complex in Montpelier.

EDGERTON — Edgerton’s Ashlyn Sleesman pitched a complete-game one-hitter to help the Bulldogs get a 6-1 nonconference softball win over Pettisville on Monday in Edgerton.

Sleesman fired 14 strikeouts in 22 batters faced for Edgerton (9-9) and only allowed one hit, one run (zero earned) and no walks.

Grace Schroeder singled and drove in three runs in the cleanup spot for the Bulldogs, while Allison Elliot scored twice and singled. Lola Giesige also tripled and scored twice.

Ella Richer crossed the plate once, singled and stole a base to front the Blackbirds (4-6). Kenzie Rivera got the loss in the circle and threw a complete game.

HICKSVILLE — Hilltop’s Lana Baker pitched a near perfect game, only allowing one hit and two walks while striking out 11 to help the Cadets get a 12-0 nonconference victory over Hickville on Monday at Aces Field in Hicksville Park.

Hilltop totaled 13 hits and committed no errors, while the Aces (6-11) made six. Alyssa Seitz had the lone hit and drew a walk for Hicksville.

VAN WERT — Fairview’s bats were steady against Van Wert, as the Apaches scored 10 runs on 13 hits en route to a 10-2 nonconference win over the Cougars on Monday at Jubilee Park in Van Wert.

Jasmin Minck got the complete-game win in the circle. She struck out seven and allowed four hits (one home run), two runs (both earned) and four walks.

MORENCI, Mich. — North Central’s Kendall Sutton only allowed one earned run and got 11 strikeouts in the circle, but the Eagles could only scrape across one run on five hits and fell 4-1 to Morenci (Michigan) in a nonconference game on Monday at Morenci High School.

Sutton also allowed four walks and all four runs in her complete-game performance. She also added a hit in No. 3 spot, while Macie Gendron singled and drove in the run for North Central (8-9). Kailysa Hickman added a triple.

MONTPELIER — Montpelier’s softball team fell 15-3 in five innings against Antwerp in nonconference play on Monday at the Superior Athletic Complex in Montpelier.

No stats were reported before deadline.