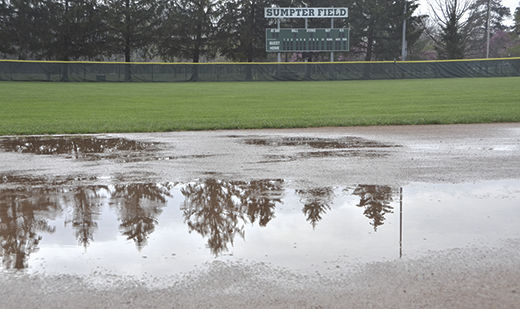 Pictured is Sumpter Field after rainy weather swept through northwest Ohio on Tuesday. 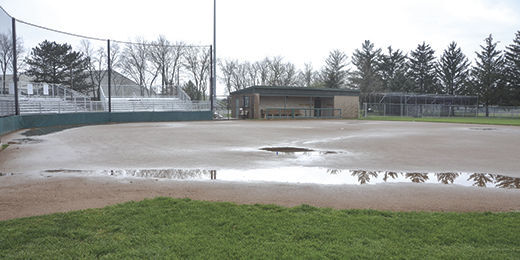 Pictured is Field No. 5 at Recreation Park after rainy weather swept through northwest Ohio on Tuesday.

Pictured is Sumpter Field after rainy weather swept through northwest Ohio on Tuesday.

Pictured is Field No. 5 at Recreation Park after rainy weather swept through northwest Ohio on Tuesday.

All area athletic events slated for Tuesday were wiped out due to the rainy weather that swept through northwest Ohio.

Bryan’s track and field team also had a tri-meet with Evergreen and Archbold at Pifer Field in Metamora rained out.

Hilltop’s softball team (17-3) and baseball squad (5-11) had a pair of home nonconference matchups rained out at Hilltop High School. Softball was supposed to face Napoleon (2-10) — and is rescheduled to play the Wildcats at 5:30 p.m. Thursday — and baseball was going to take on Pettisville (3-10).

Montpelier (9-7) had a nonconference baseball contest at Antwerp (11-2) canceled and Edon’s baseball team (6-9) didn’t travel to Swanton Memorial Park for a nonleague game vs. the Bulldogs (5-8).

A track and field meet with Edon, Stryker and Holgate at Stryker Athletic Complex was rained out; a tri-meet with Hilltop, Montpelier and Pettisville at Pettisville Park got canceled and Edgerton’s quad meet with Antwerp, Continental and Fort Jennings at Antwerp High School was wiped out.

A dual meet between North Central and Fayette at Fayette High School and Fairview’s quad meet with Ayersville, Tinora and Hicksville at Hicksville Park were also canceled.