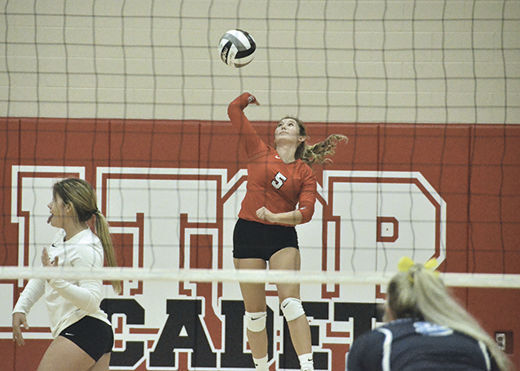 Hilltop’s Arleigh Van Arsdalen serves the ball during the Cadets’ match against Montpelier on Thursday at Hilltop. 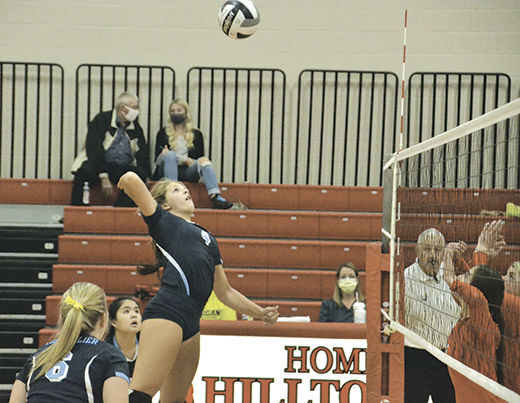 Montpelier's Chelsea McCord (4) jumps in the air to spike while teammates Jessi Bumb (6) and Emily Manisaeng (middle) look on during the Locomotives' match against Hilltop on Thursday night at Hilltop High School.

Hilltop’s Arleigh Van Arsdalen serves the ball during the Cadets’ match against Montpelier on Thursday at Hilltop.

Montpelier's Chelsea McCord (4) jumps in the air to spike while teammates Jessi Bumb (6) and Emily Manisaeng (middle) look on during the Locomotives' match against Hilltop on Thursday night at Hilltop High School.

WEST UNITY — For Hilltop volleyball coach Janice Bruner, there was one key her Cadets did against Buckeye Border Conference opponent Montpelier on Thursday night — serving.

“We served really well,” Bruner said. “We kept them off balance on serve receive. We played fairly consistent across the top, moved the ball around a little bit. That was a success for us.”

The Locos (2-5, 2-2 BBC) were led by junior Chelsea McCord, who had a team-high seven kills and two blocks. Senior Jessi Bumb led in assists (20) and junior Alyssa Custer had a team-high 18 digs.

“We were definitely aggressive at the net,” Montpelier coach Khrysta Coleman said. “We had a lot less errors than we have in the last few games. We need to tighten up our serve receive and our defense, and we have to get our passes up to target in order for our hitters to do their thing.”

Early in the first set, neither team could pull away as it was tied 7-7. But Hilltop scored four straight points that forced a Locos timeout, and the Cadets continued that momentum to take a 1-0 match lead.

The Locos, however, rebounded in the second set, tying it at 8-8 thanks to a kill from freshman Emily Manisaeng. Later in the set, she fired an ace to make it 21-18 Hilltop and keep Montpelier within striking distance.

“That second set is when we came out a lot more aggressive,” Coleman said. “We were starting to push some things and tighten up our defense a lot. So, we were able to close that gap and be a little bit closer.”

Hilltop, though, scored the last four points to take a 2-0 lead in the match. The Cadets carried that momentum early in the third set with a 10-3 lead, forcing another Montpelier timeout.

The Cadets stretched their lead to 20-8. A kill from Montpelier junior Ariel Page made it 20-9 and sparked a Locos run as they scored eight of the next 11 points to make it 23-16.

“I think the goal any night is to come out and play your best every point,” Bruner said. “I thought Montpelier scored on some smart plays — the tips in the middle, the roll shots — and we have to do better at taking that away, and making a team really have to earn the point.”

Hilltop closed the match by scoring the next two points.

“Just talking with (my team) in the locker room, we have to play every point at the same level of intensity, to make sure we’re covering the court, be where we need to be on every single play and being consistent with that,” Bruner said. “And I think we’ll be able to do well.”