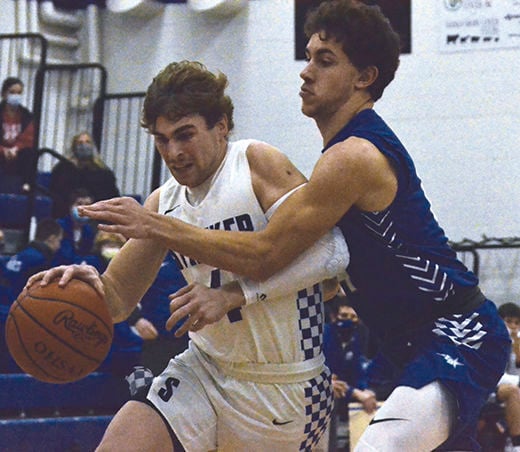 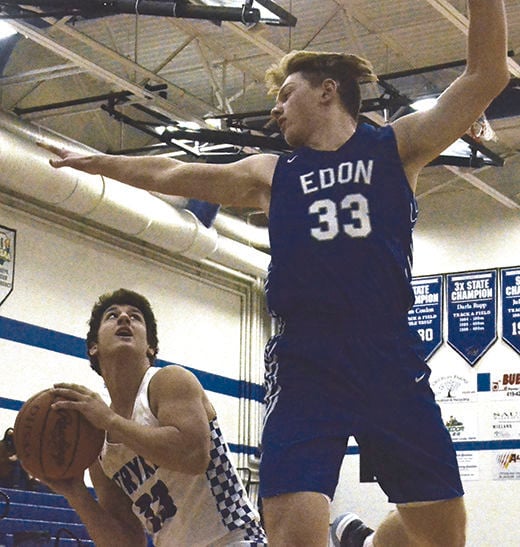 STRYKER — Stryker had a strong first half against Edon with solid offense and defense to give itself a 22-9 lead.

The Bombers, however, came out of halftime making shots, hitting 9 of 13 from the floor in the entire second half, and cut the Panthers’ lead to one point (31-30) with 2:16 left in the game.

But it wasn’t enough. Stryker hit some late free throws to secure a 37-32 victory over Edon in a Buckeye Border Conference boys basketball game on Monday at Stryker High School.

“It’s just an amazing team win. I’m proud of how we hung on,” Stryker coach Tyler Woolace said. “We got up by so much, and then all of sudden they came back. And credit to them, the didn’t give up.

“We missed some really easy shots I thought, but Edon came back and hit some big shots and cut it down there to one. And then our guys stepped up and handled that and kept running the offense, didn’t get flustered and was able to pull it out there in the end.”

Kaleb Holsopple dropped a game-high 11 points for the Panthers (3-4, 2-3 BBC). Levi Barnum and Amos Sloan each chipped in six points — both hit two free throws with less than 22 seconds in the game — while Barnum also added a game-high five steals. Spencer Clingaman, Payton Woolace and Jacob Cadwell all had four points each.

“We weren’t mentally prepared, we weren’t ready to come out and play and it showed,” Edon coach Dale Curry said. “They got a big lead on us right away and it took the rest of the game to battle back into it — takes a lot of energy. So when we needed it most at the very end of the game, we were a little gassed.”

Stryker got off to a rolling hot start, getting an 11-0 lead with 2:59 left in the first quarter with help from Holsopple (five points), Sloan (four) and Barnum (three steals).

While Edon went on a quick 4-2 run to end the first quarter, the Panthers were still having their way. They outscored Edon 9-5 — while getting outrebounded 11-7 — in the second quarter to take a 22-9 halftime lead. Stryker also forced eight Edon first-half turnovers compared to one Panthers turnover.

“They scored nine points in the half, and that was due to the defense and us being aware of where we’re going and what we’re doing,” Tyler Woolace said. “We’ve been working a lot on our defense and a lot on being in the right place, being in the help-side — we get lost every now and then. But tonight, we were on help-side.

“We got a lot of tips, a lot of nice easy buckets off of that and that was huge for us.”

The Bombers started crawling back, though, in the second half. Even with committing five turnovers to Stryker’s three, Edon outscored the Panthers 11-5 — with Gallehue (four points, two steals) leading the way — on 4-of-6 shooting and slimmed the lead to 27-20 going into the fourth quarter.

“I thought (my guys) actually settled in towards the end of the first quarter, but they gained their confidence in the the third quarter after they came back out (from halftime),” Curry said. “We allowed Stryker to take us out of our game. We weren’t playing with fluidity on our passes and our movement on offense.

“They did a great job defending us and they made us pay for it.”

Stryker got to the free-throw line three times in the final two minutes — once each from Holsopple, Barnum and Sloan. All three hit both of their free throws, with Barnum and Sloan converting with 21.2 seconds and 2.5 seconds left to get the win.

And Tyler Woolace couldn’t have been happier, especially for Sloan, who’s been a big factor for Stryker recently.

“Amos Sloan the last two games has provided a lot for us. And I told him in the locker he’s our MVP of the last two games,” Tyler Woolace said. “He brings that energy, he brings that desire and he’s undersized as a big man (5-foot-9), but he works harder than anybody and that’s what gives our team a spark...

“It couldn’t have happened to a better kid.”