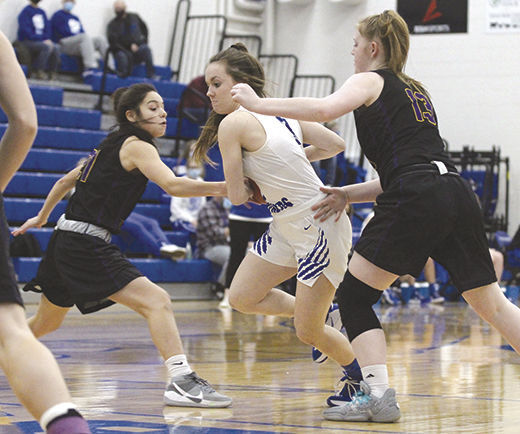 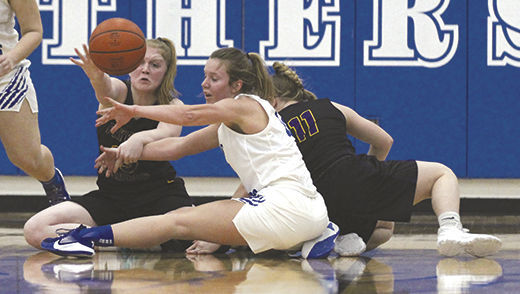 STRYKER — For the third time in the last 19 days, Stryker and Fayette squared off in a girls basketball game.

And for the third time, Stryker gutted out a win.

The Panthers started the fourth quarter on a 7-0 run and used a 10-2 advantage in the final frame to pull away for a 27-16 victory in a Division IV sectional semifinal on Wednesday at Stryker High School.

“We knew it was tournament time, so everyone’s going to come out harder in tournament time and I thought they came out, played harder than they have the last couple games,” Stryker coach Conner Varner said of Fayette. “It took us a little bit to get used to that, but they played very, very hard and they didn’t quit until the very end either.”

Defense dominated throughout Wednesday’s game. The two teams combined for 29 turnovers and shot just 17 percent (12 of 70) from the floor overall.

But the Panthers found just enough of an offensive groove late to keep their season alive.

Stryker sophomore point guard Sage Woolace, who finished with game highs of 14 points, seven rebounds and made numerous key assists and steals, scored on a tough drive to the basket and added two free throws to give the Panthers a 17-12 lead with 1:30 left in the third quarter.

Woolace found Kinsey Myers for a 3-pointer to open the fourth-quarter scoring and give Stryker a 20-14 advantage. Kaitlyn Myers hit 1-of-2 free throws, Alexia Wickerham split a pair at the line and Woolace nailed both ends of a 1-and-1 as the Panthers took a 24-14 lead with 1:02 left.

“I think that throughout the whole game, I felt like our defense was always there,” Woolace said. “That’s how we are in normal games; our offense isn’t the best, that’s not our amazing skill that we have. But once we keep our defense up for the first three quarters and just push really hard, our offensive shots will start to fall and we saw that in the last quarter.

“I thought that no matter if your shots were going in the whole game or not, we just all kept pushing.”

Fayette’s Amber Gaona scored on a drive to the basket with 50 seconds left to end an eight-minute scoring drought for the Eagles, but Woolace came right back with a free throw. Woolace swiped the ball from Gaona and raced down the floor for an easy layup with 15 seconds left to secure the victory.

“Thankfully that second half, especially that fourth quarter, we were able to convert a little bit more offensively.”

Woolace and Kinsey Myers sparked a key stretch in the second quarter to get the Panthers the lead. Woolace’s defensive rebound near the 3-point line turned into an easy layup on the other end for a 6-4 lead, and on the next possession, Myers rattled in a 3-pointer off Woolace’s pass.

A pair of Woolace free-throws with 3:32 left gave Stryker an 11-4 advantage.

“That really just got our energy up a lot,” Woolace said of her defensive rebound/layup. “It was a close game, I knew we needed to start pushing it.

“It’s game time, it’s tournament time, you win or you lose and you go home, so I just knew it was time to go. I just felt like that layup right there helped our energy throughout the whole game and just really brought us up.”

Fayette shot 15 percent (6 of 41 overall, including 0 of 11 from 3-point range) from the floor and 67 percent (4 of 6) from the free-throw line. The Eagles were able to get to the basket and get solid looks, but struggled to put the ball in the hoop.

“We just played them Friday here (at Stryker) and I told them as aggressive as they play defense, we only shot two free throws that whole night,” Fayette coach Ryan Colegrove said. “That means we’re not taking the ball to the basket, so they did listen to that part. We took the ball to the basket.”

Up next for Stryker will be Crestview (18-3), which shared the Northwest Conference title with Delphos Jefferson after both teams went 7-1 in league play.

Confidence will be key for the Panthers.

“I feel like no one should count us out,” Woolace said. “Hilltop was No. 4 seed, we just played them and lost by one point on a buzzer beater (37-36 on Feb. 11). I feel like we’re going to play with any team no matter what and play our hardest no matter what, and I feel like it should be a really good game.”