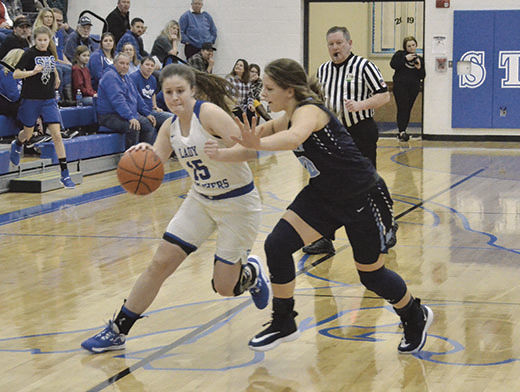 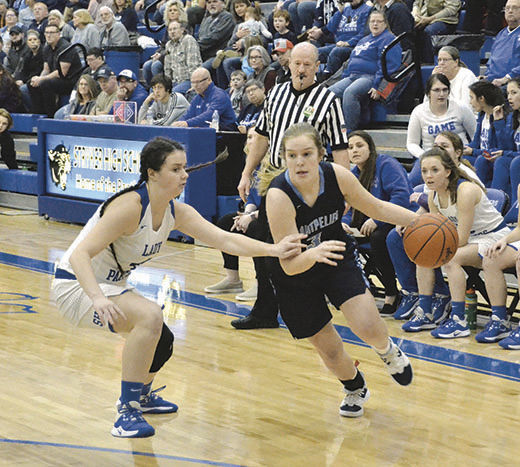 STRYKER — The Stryker girls basketball team put a capper on its miraculous second-half run on Thursday night, beating Montpelier 47-31, the Panthers’ seventh win in a row, to earn a three-way share of the Buckeye Border Conference title with the Locomotives and Edon.

“I’m just happy for this group of seniors,” Stryker coach Steve Brown said of the group after their final home game. “They’re just a great group of kids, super, super kids. They’ve been great leaders. They kept us together when things weren’t looking good during the year. They kept the group together. Their leadership trickled down into the rest of the team.”

The Panthers’ seniors featured heavily early, as Courtney Stewart buried three 3-pointers in the first quarter alone to give Stryker a 12-6 lead after one period of play.

Montpelier (11-10, 8-4 BBC) crawled its way back into it, though, as two straight buckets from sophomore Trinity Richmire closed the gap to 14-13 with 5:01 left in the quarter, forcing a Panthers timeout. Strkyer responded with another triple, this time from Kinsey Myers, and the Panthers carried a 19-15 lead into the intermission.

Stryker (13-9, 8-4 BBC) started to pull away when it opened the second half on a 6-0 run to open a 10-point gash on the Locomotives with 4:19 left in the third quarter, and a free throw from Makenzie Cadwell sent Stryker to the final quarter with a 31-21 advantage.

Stryker extended its lead in that final period, leading by as many as 20 points, at 45-25, after a steal and coast-to-coast layup from freshman Sage Woolace. Montpelier tried to get its offense going after it had stalled for most of the second half, with triples from Halie Rose and Emily Fritsch, but it was already too late, and Stryker won 47-31.

Stryker knew coming in that if it beat Montpelier, it clinched a share of the BBC title. Instead of letting that pressure get to them, Brown said he relied on his seniors to keep the team focused heading into game time.

The Panthers finished the season with seven straight wins, with five coming in the league. Brown is hoping that momentum will carry into their next game, a Division IV sectional final against either Fayette (12-10, 7-5) or Antwerp (12-10, 4-3 Green Meadows Conference) on Feb. 22 at Bryan High School.

“The last two or three weeks of the season, you’d see it in practice,” Brown said. “Hopefully, we’ll carry that into the tournament. We’ll give them tomorrow off, but then we’ll come back Saturday and get ready.”

“We lost to a better team tonight; our kids gave great effort,” he said. “You learn from these experiences. This has been a successful season. The kids are resilient. You just be honest with them. We played hard, but it didn’t work out. We’ve got to regroup. That’s sports.”