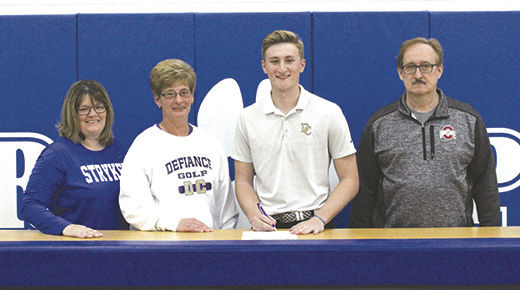 STRYKER — Spencer Clingaman and Kinsey Myers, two of Stryker’s top senior athletes on the links and the track, respectively, will be continuing their athletic careers at the next level.

Clingaman will play golf for Defiance College, while Myers will run track and field for Bluffton University. The two standouts signed to compete for the NCAA Division III schools at an event Monday at Stryker High School.

Clingaman, who also played basketball for Stryker, put up impressive finishes throughout his four years on the Panthers’ golf team.

He was a three-time Division III district tournament qualifier and finished in the top 25 individually each time, including tied for 11th in 2019.

Clingaman was also a four-time first-team all-Buckeye Border Conference performer. He shared medalist honors in the conference tournament as a freshman in leading the Panthers to their fourth-straight league title.

The Clingaman name has been associated not only with Stryker golf, but Defiance College as well. Spencer’s cousin, Hayden Clingaman (2017 Stryker graduate), has been teeing it up for the Yellow Jackets the last four years and is coming off a tie-for-sixth finish in the Heartland Collegiate Athletic Conference Championship last weekend at Hidden Creek Golf Club in Lima.

There is a possibility the two golfers could be hitting the links together at Defiance as Hayden Clingaman has an extra year of eligibility left.

“It would be awesome. I’ve never had the opportunity to play with a family member,” Spencer Clingaman said. “They’ve either been too many years ahead of me or I don’t have anybody behind me since I’m the last one, so I’m excited. If the opportunity’s there or if he decides to take the opportunity, it’s going to be fun.”

Meanwhile, Myers will look to make an impact for Bluffton, also a member of the HCAC. The Panthers’ senior reached the 2019 Division III regional tournament in the 400-meter run.

“I’m super excited. I wasn’t really going in thinking I was going to run track (in college), but the coaches talked to me and it was a great opportunity,” Myers said.

Myers, who also played volleyball and basketball for Stryker, has gotten off to a strong senior season in track individually in the 200 and 400, as well as the sprint relays.

“I’ve got some big goals as a team and individually going back to regionals and then just using that and keep working hard next year, and hopefully do good things next year,” she said.

Myers said she chose Bluffton, located 60 miles southeast of Stryker, because it is close by.

“It’s close to home and smaller,” Myers said. “I really like that and I just liked the family atmosphere there.”