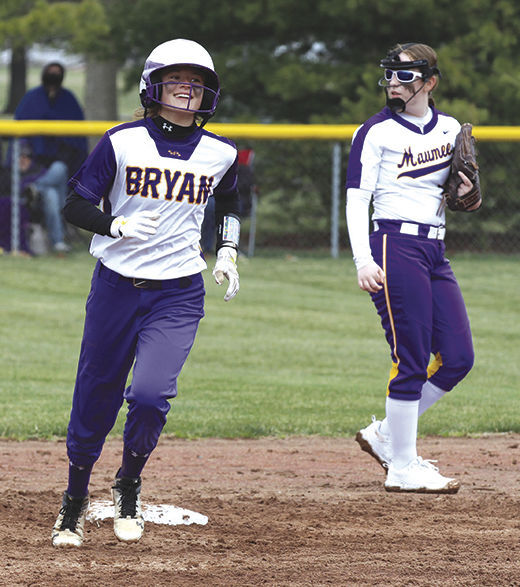 Bryan’s Tabithah Taylor (left) smiles as she rounds second base past Maumee’s Julia Becker after hitting a home run during Saturday’s softball game at Recreation Park. 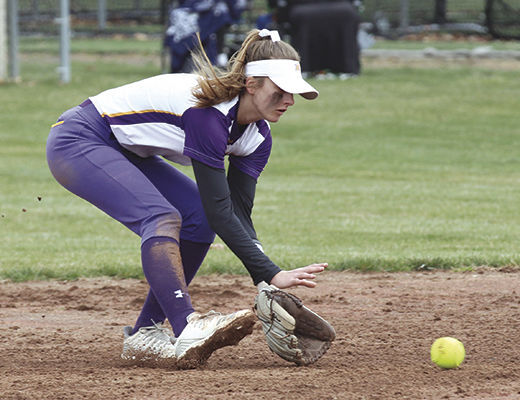 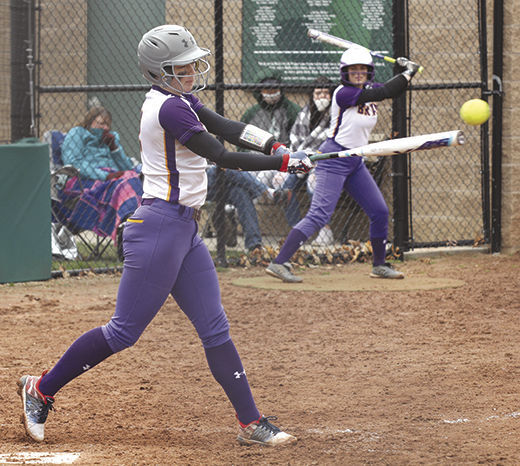 Bryan’s Scout Smith hits the ball during the Golden Bears’ softball game against Maumee on Saturday at Recreation Park.

Bryan’s Tabithah Taylor (left) smiles as she rounds second base past Maumee’s Julia Becker after hitting a home run during Saturday’s softball game at Recreation Park.

Bryan’s Scout Smith hits the ball during the Golden Bears’ softball game against Maumee on Saturday at Recreation Park.

A pair of powerful swings in the same inning from Tabithah Taylor highlighted a strong start to the season for Bryan’s softball team.

Taylor, a 5-foot-2 freshman for the Golden Bears, blasted a solo home run in her first official varsity at-bat to open the third inning. She added a two-run triple later in the frame as Bryan cruised past Maumee 13-1 in five innings in the season opener for both teams Saturday at Recreation Park.

“It was really cool. I was probably just as shocked as everybody else was,” Taylor said of her home run. “I didn’t see it (go over the fence) at first, but then I was like ‘Oh,’ so I just slowed down and kept going.”

“We came out really strong today,” Fowls said. “The girls were super motivated coming in for a Saturday morning, super excited, ready to play.

“Freshman Tabithah Taylor, first at-bat for a varsity game, drilled one over the fence, that was amazing. Addie pitched outstanding, all of our girls did a great job, so overall, great work by everyone.”

It started quickly with Taylor.

On the first pitch from Maumee’s Josie Brooks, Taylor drilled a shot over the left field fence to give the Golden Bears a 6-0 lead.

“I asked her what she ate for breakfast because she needs to keep doing it,” Fowls said with a laugh. “But that was awesome for her, an awesome start and I told her just to work hard at every at-bat.

After Kailee Thiel and Olivia Moore both walked, Arnold smacked an RBI single to center field to give Bryan a 7-0 advantage. Delilah Taylor’s bloop single to left field made it 8-0, and a two-run single up the middle by Scout Smith gave the Golden Bears a double-digit lead.

Bre Long drew a walk to put runners on first and second with one out. Two batters later, Tabithah Taylor connected on another deep shot to left field. Smith and Long both scored, and Taylor made it to third to give Bryan a 12-0 lead.

“I was trying to do it again, and then I saw the same pitch and I swung and it was close,” Taylor said.

Taylor tallied four RBIs, including one in the first inning after getting hit by a pitch with the bases loaded. Arnold had two singles, and RBI and three runs scored.

Delilah Taylor had two singles, two RBIs and two runs; Smith had a single, three RBIs and a run; Long scored twice along with a first-inning RBI single; and Moore singled and scored twice.

“We have a good team this year and we’ve all been hitting really well at practices, and it’s starting to show in games,” Tabithah Taylor said.

Meanwhile, Arnold retired the first nine batters she faced before allowing a bunt single to Haley Hughes to open the fourth inning. On the next pitch, though, Bryan freshman catcher Ella Voigt threw out Hughes at second base.

The Golden Bears return to action at 5 p.m. Monday with a home game against Fairview. It will be the season opener for the Apaches, who have won five district championships in the last seven years.