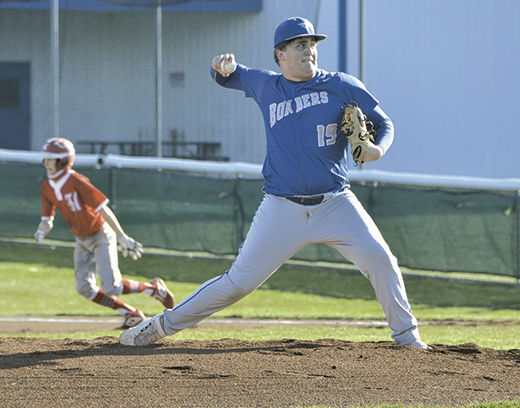 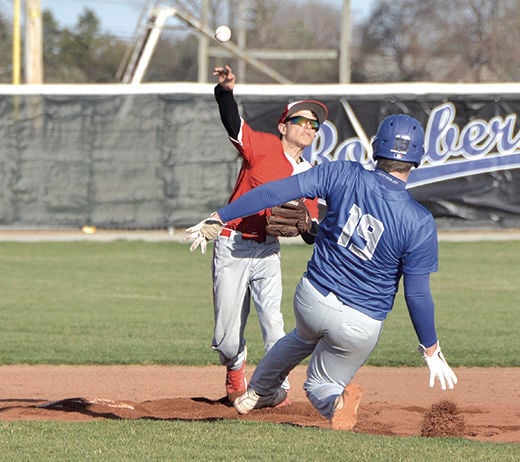 EDON — Edon’s Cole Vasquez was on target against Hilltop on Friday.

In his first start at pitcher this season, the Bombers’ junior struck out 13 of 28 batters faced and only allowed two runs and six hits in a six-inning complete game.

His performance, along with nine Hilltop errors and an eight-run sixth inning, helped the Bombers get a 12-2 Buckeye Border Conference baseball win against the Cadets — their first victory of the season — at G. Kent Adams Field in Edon.

“I was trying to hit corners, I was throwing my curveball for strikes and (then they) would expect them to be strikes, and I’d throw them in the dirt,” said Vasquez, who also allowed three walks, went 1 of 5 at the plate with a run and had the game-sealing sacrifice fly. “So (I) was just keeping them off their toes, basically.”

After a scoreless first inning, Hilltop’s Ethan Varney (1 of 4) had an RBI single and Evan Schoonover (0 of 3) an RBI groundout to make it 2-0 heading into the bottom of the frame.

But the Bombers (1-2, 1-1 BBC) responded. Caden Nester drew a leadoff walk against Chase Whitman and Garrett Skiles got hit by a pitch to start the bottom of the second.

Konnor Prince had a sacrifice bunt the next at-bat to move the runners to second and third and Wyatt Moore was fanned, but a Hilltop catching error on a Connor Towers fly ball brought in Nester and Skiles to make it 2-2 after two.

In the remaining four innings, though, the Cadets committed seven more errors, making only four of Edon’s 12 runs earned.

Whitman, who started and was credited with the loss after allowing Edon to get a 3-2 lead in the fourth, and Connor Schlosser also combined for 10 walks from the mound — Whitman had seven in 4 2/3 inning and Schlosser three in one inning.

“I thought about for four and a half, five innings, we battled an extremely good pitcher in Cole Vasquez and had ourselves in position to win a tight ballgame,” Hilltop coach Tony Gerig said. “But... we just made way too many mistakes and gave way too many free passes, (both) walks and errors.

“Baseball’s not rocket science. If you can’t throw strikes and we can’t field when the ball is hit to you, can’t make a throw when you have to, we just have no chance.

“And it was too good of an effort for us offensively (six total hits) against a good pitcher for us to squander it by not doing the other aspects of the game.”

After a second inning where he let up three singles and walked two batters, Vasquez couldn’t be hit. He only allowed two hits and one walk while fanning 10 batters the rest of the way.

“Cole Vasquez did a heckuva job for us on the bump,” Edon coach Brien Moore said. “That’s what we expect from him every time he goes out for us.”

After Towers got an RBI walk in the fifth to give the Bombers a 4-2 lead, Edon’s bats came alive.

The Bombers brought in eight runs in the bottom of the sixth to give themselves the run-rule victory and bounce back from a pair of losses to open the season.

“I thought we bounced back (from) getting run-ruled last Saturday (11-1 loss at Holgate) and Tuesday, putting a complete game together,” Moore said. “We put the ball in play and we found holes tonight where we weren’t finding them the first two games.”

Nester (1 of 2) scored three times and drew two walks, while Skiles (1 of 2) slapped a 2-run single in the sixth, scored twice and walked once. Towers added two runs.

Ethan Steinke (0 of 3) and Wade Parrish (0 for 2) each had two walks and a RBI atop the lineup, with Parrish also having a run.

Towers, Steinke and Parrish also each added a steal. The Bombers had five total hits.

“I thought we ran the bases well — and that’s big. We found out later we want to be very aggressive on the bases, getting our leadoff man on every inning and just putting guys in motion,” Moore said. “We were able to do that tonight, where the first two games everybody... kept us in check. Being able to execute the gameplan, that’s crucial and big going forward.

“I’m just happy. One through 13 played well tonight, did something for the ball club. I’m just proud of my guys.”

Whitman, who threw four strikeouts, finished 1 of 2 with a single and a walk. Lucas Jacobs (1 of 3) and Isaac Baumgartner (1 of 3) each had second-inning singles, with Jacobs also scoring. Wade Wagner (1 of 2) scored Hilltop’s only other run, while also drawing a walk and getting a third-inning single. Schlosser (1 of 2) added a single, a stolen base and was hit by a pitch.

“Disappointed that we let this one get away. It was a winnable game for us, and we had a chance to win it,” Gerig said. “But our kids will bounce back. It’s a good group of kids.

“They’re going to fight back. And there’s no finger pointing. That’s a good group of guys, so I’m not worried about them one bit.”