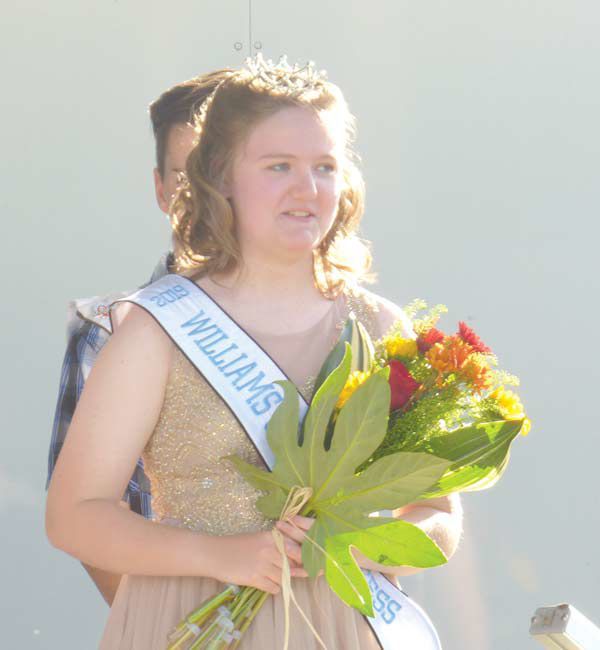 Alexis Firm is pictured with her sash, tiara and a bouquet of flowers shortly after her coronation as 2019 Williams County Fair Princess in September. LUCAS BECHTOL/Staff 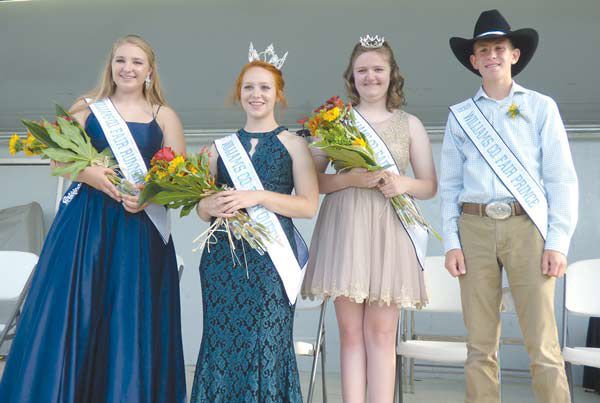 Alexis Firm is pictured with her sash, tiara and a bouquet of flowers shortly after her coronation as 2019 Williams County Fair Princess in September. LUCAS BECHTOL/Staff

This year, the program included two new positions, prince and princess, for 4-H’ers who are 12-15 years old.

They decided to add the prince and princess positions this year because interest has been down in the royalty contest.

This year there were no king contestants at all.

“We had decided to bring the prince and princess to acknowledge it more,” Wortkoetter said. “We ended up having seven girls run for princess and four boys run for prince. It got our numbers up a bit and gets it a little more known and out there.”

It also increased the crowd size of the final question and coronation, which happened on the first day of the fair.

With more people at the event, they get more recognition and more interest in king and queen going forward.

The first ever Williams County Fair princess and prince are Alexis Firm and Johnathan Dorsten, respectively. Both are from Bryan.

Firm, 16, said she participated to see how well she would do.

“I kind of just wanted to see how the royalty program, how it works,” she said. “I wanted to be a part of it.”

Winning was a surprise for Firm. She missed out on two parades and she thought that would work against her.

“And it was kind of hard to know how I did during my interview process,” she said. “I just showed up and I think I did OK with that.”

Dorsten said he was interested in the program because in high school his mom was crowned as the fair queen.

“That was something when I was younger I thought would be cool to be part of,” he said.

“It was something I thought I had a good chance at it,” he said. “When they announced my name, it was a very awesome moment.”

The contest involves several activities, including an interview.

“The interview is a big part of their score,” Wortkoetter said. “They also participate in parades throughout the summer to represent the Williams County Fair.”

Once at the fair, they are asked one final question — which could include their favorite food stand at the fair or what they’ve learned in 4-H — before three judges. Their scores are then tallied and a winner is crowned, either with a tiara for the princess/queen or a cowboy hat for the prince/king.

“I feel I represent the county well; I put a lot of work into the fair,” the Stars of 4-H Club member said after her coronation. “I’m really involved; I’m on Junior Fair Board. I spend a lot of time here, so I felt that I really represented the county well.”

Winning the contest is only the first step, Wortkoetter said.

Once they have the tiara or hat, they have additional responsibilities, such as giving out ribbons and trophies during the show.

“They have some duties they do during the fair and then they also help out through the year with different things that go on at the fairgrounds,” she said, adding they help out when the various commodities groups host their annual dinners. “They also come and help at the Maple Syrup Festival and anything that is related to the fair and fairgrounds.”

Firm said one of her duties will now be to go around to different fairs to see what they do differently.

“I think it’s going to be really fun and interesting,” she said.

As the prince, Dorsten said his duties were fewer than for the queen, but at the fair he did help pass out ribbons at the different livestock shows.

“If you have royalty from another fair come in and visit, I give them a tour,” he said. “Just simple things like that, help around the fair, try to get a better name for the fair or increase people coming.”

With the fair over, much of the responsibilities are over, Dorsten said, but he plans to visit other fairs.

As the fair queen,Grime will also represent the county at the conference, competing for a chance to earn the title of Ohio State Fairs’ Queen this January.

The title isn’t out of their reach just because they are from a small town, either, as in 2017 Edon resident Crista Wortkoetter — Danyel Wortkoetter’s daughter — was crowned the Ohio State Fairs’ Queen.

One lesson learned in the program, Wortkoetter said, is being able to stand in front of a crowd and speak, an especially important skill for the queen at the state competition.

“The last couple of years, the state has had 79 (contestants),” she said. “They usually have a nice crowd.”

The interview process is also beneficial, as it helps them to be able to speak to adults and represent themselves, Wortkoetter said.

This helps them for job interviews or college and scholarship interviews.

“It also gives them responsibilities,” she said. “The princess this year told me she didn’t realize all the responsibilities for royalty. I told her most of the time they don’t until you are one.”

Firm found the overall experience fun, saying the program was nice and that more kids her age should be involved. She intends to participate in the queen competition next year.

Dorsten echoed these comments, saying both the royalty competition and 4-H as a whole are “great opportunities.”

He plans to participate in the king competition, but only if there are other people.

“You can only be king once,” Dorsten said. “So, I might not run next year if there is no one against me. So, I don’t really want to be king my first year, I think it’s something I’d rather do later on.”

Democratic presidential candidates go after each other in SC debate

Who is off-limits from President Trump's criticisms?