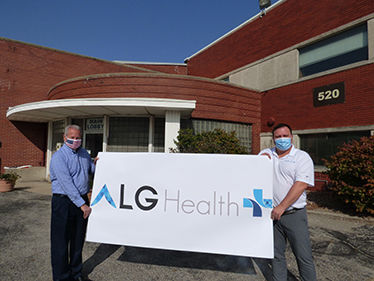 ALG Health on Monday announced plans to move into 520 W. Mulberry St., in Bryan, to begin producing N95 respirator masks. ALG Health owner and CEO Adam Harmon, at right, said he needs to hire 100 workers to begin production as early as November, with plans to eventually expand to 400 employees. Spangler Candy Company, with its headquarters and production facilities located virtually next door at Portland and Mulberry streets, is leasing the building to ALG Health, said Spangler President Bill Martin, at left.

Pictured is a N95 respirator mask, the type being produced by a new company coming to Bryan.

ALG Health on Monday announced plans to move into 520 W. Mulberry St., in Bryan, to begin producing N95 respirator masks. ALG Health owner and CEO Adam Harmon, at right, said he needs to hire 100 workers to begin production as early as November, with plans to eventually expand to 400 employees. Spangler Candy Company, with its headquarters and production facilities located virtually next door at Portland and Mulberry streets, is leasing the building to ALG Health, said Spangler President Bill Martin, at left.

Pictured is a N95 respirator mask, the type being produced by a new company coming to Bryan.

ALG Health announced Monday it is opening a new respirator mask making facility in Bryan that eventually could bring as many as 400 new jobs to Williams County.

The company is moving into 520 W. Mulberry St., a 400,000-square-foot industrial building formerly occupied until this past August by Gendron Inc., a medical equipment company.

LG Health was created in 2020 as a division of the parent company, Axis LED Group, a manufacturer of commercial and governmental LED lighting based in Chicago.

Adam Harmon, a Defiance native and 1999 DHS grad, is company President and CEO. He told The Bryan Times in an interview outside the building Monday he hopes to begin moving machinery in as early as later this week. Initial plans are to use about 100,000 square feet of the building space and begin production in November with 10 machines and about 100 workers, gradually expanding to as many as 60 production machines and 400 employees, he said.

“The N95 will be our speciality (in Bryan),” Harmon said, with N95 respirator masks comprising about 90% of production and surgical masks about 10%.

Axis LED Group is currently operating a manufacturing facility in Defiance primarily producing LED lights, along with a small number of medical-grade respirators and masks. But mainly because of the ongoing COVID-19 pandemic, Harmon said the significant increase in demand for masks led the company to seek increased production and a larger location.

“The response to our products has been overwhelming, and we needed to find a space that was as close to move-in ready as possible,” Harmon said, adding, “It was crucial for us to keep the business in Northwest Ohio, and we were very fortunate to find a location in this area ready to go.”

Harmon said earlier this month he was just hours from signing a lease for the former Walmart building at 1851 Oakwood Ave., in Napoleon, when a chance encounter by someone from his company and someone from Gendron led him to tour 520 W. Mulberry St.

“And when I did I was just dumbfounded how perfect it is for us,” said Harmon, noting that because Gendron was also a medical products manufacturer, the cost to get the Mulberry Street building ready is a fraction of what it would have taken to renovate the former Napoleon Walmart building, which has sat vacant for 18 years.

“The city of Napoleon was great to work with, but at the end of the day, the facility needed more upgrades than time would allow.” Harmon said.

He estimated ALG Health’s investment in the new Bryan facility could total about $10 million.

“We’re excited to have ALG Health as a neighbor to our Spangler Main Campus. Since the space in our Spangler West Campus became available, our goal has been to bring in a business that would benefit the overall community,” said Martin.

“We are delighted that ALG Health chose to come to Bryan and Williams County. Northwest Ohio has a has a strong work ethic, and with the workforce and support services available, we think this will be the ideal place to grow the company,” Hausch said.

Harmon said as the COVID-19 pandemic struck earlier this year, he noticed issues in the supply chain of Personal Protective Equipment, such as masks, and the fact that virtually all masks were produced in China.

While Axis LED Group mainly produces lighting, Harmon began limited mask production in Defiance within the past few weeks, which proved so popular it led to the new venture that has landed in Bryan.

“I just thought we needed to begin rebuilding our supply chain here (in the U.S.) and producing masks here and bring it back from China to here,” he said.

Currently, FDA approvals have been received and the company has applied for expedited certification from the National Institute for Occupational Safety and Health (NIOSH) certification to complete the requirements to become N95 certified. Harmon said he expects to receive NIOSH certification in two to three weeks.

Harmon said even when the COVID-19 pandemic subsides, he sees a market for masks for the next health issue and even as part of new universal health protocols that could emerge as a result of the current pandemic.

For more information on ALG Health, including applications for employment, log on to: https://alg-health.com/. (Note: ALG Marketing Manager Todd Yunker said Monday the website is under construction and should be fully operational by the end of this week)

Covid-19 shut down campuses. That hasn't stopped students from voting

Zeta batters Mexico, US Gulf Coast up next

See how Texans are fighting to keep their businesses alive

Amy McGrath: McConnell is absolutely not looking out for Kentucky