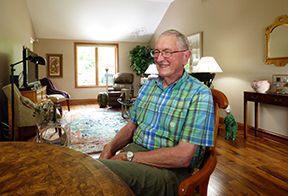 Longtime Bryan pediatrician Dr. Allen Jackson smiles in his home during a 2019 interview with The Bryan Times. Jackson, who was born and raised just two miles outside of Bryan and graduated from Bryan High School in 1949, recently turned 90 years old. 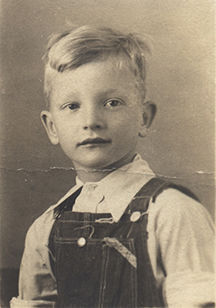 Longtime Bryan pediatrician Dr. Allen Jackson smiles in his home during a 2019 interview with The Bryan Times. Jackson, who was born and raised just two miles outside of Bryan and graduated from Bryan High School in 1949, recently turned 90 years old.

Perhaps best known now for forming the Bryan Medical Group, which greatly improved the availability and services of health care in the Bryan area, Dr. Allen Jackson’s life began humbly. He was born in 1931, the second child of a farm family who lived on what is now U.S. 6, about two miles from Bryan.

He started first grade at Ramsey School, with two other children in his grade. The following year the school closed due to lack of enrollment and he began attending Farmer School, eventually enrolling in Bryan High School in eighth grade because he wanted to participate in that school’s then-new vocational agriculture program (although the program didn’t actually launch until Jackson was a sophomore).

The future doctor also overcame a bout with whooping cough that year. His doctor’s orders: Bed rest for six weeks.

Although Jackson planned on a career in farming, his mother insisted he go to college. So he applied, and was accepted, to the Ohio State University, from which he earned a degree in rural sociology.

Through his college ROTC service, Jackson was commissioned to the U.S. Air Force, ultimately being station in Korea, where he was an intelligence officer.

After his discharge, Jackson started work as a county agriculture agent in Hardin County, but soon decided to make a career change, enrolling in the Ohio State University College of Medicine, where he found his calling in the health care field.

Around that time he also met and fell and in love with Kay, now his wife of 63-plus years.

After earning his degree, he opted to join the practice of Dr. H.R. Mayberry and return to Bryan. The work was fulfilling, Jackson said, but tiring — those were the days when doctors still made house calls.

To improve operations for both local doctors and their patients, Jackson and a team of other doctors formed the Bryan Medical Group, soon giving Bryan a reputation for outstanding health care in northwest Ohio.

“We bet our financial lives on it, but it was a sure bet,” Jackson said in a 2019 interview for The Bryan Times’ special Hometown Life publication.

Many will remember him for his 25 years as a pediatrician.

His list of accomplishments is far-reaching: Jackson has been a state county fair inspector, built a snow cone concession trailer and ran that business, helped develop the Deerfield Subdivision, served 12 years on the Bryan School Board, designed three or four houses, worked as an adjunct professor at Northwest State Community College, reviewed charts for disability for the state of Ohio and was the first director of the Bryan Area Health Education Center.

Meanwhile, he and Kay raised three children, Dan, John and Jane, in Bryan.

Favorite christmas candy in Pa. based on customer choice

'You get the racism': Sandra Bullock on raising a multi-racial family