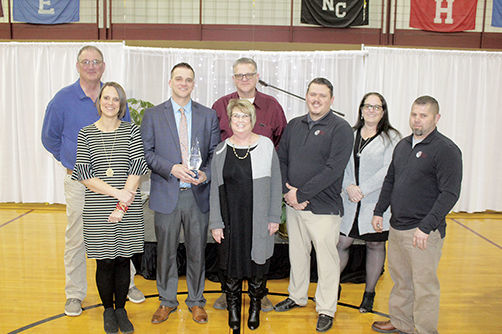 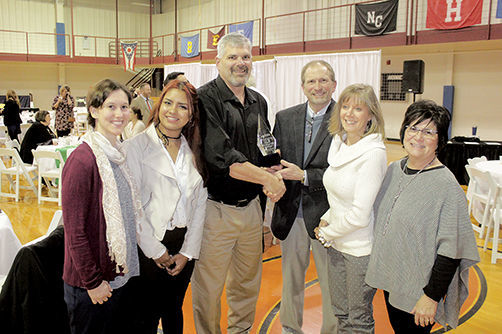 A pair of local businesses were honored at the 73rd Annual Bryan Area Chamber of Commerce Banquet Thursday evening.

Advanced Rehabilitation Technology/S&S Directional Boring was honored as the Large Business of the Year, while Artisan Floral & Gifts was named the Small Business of the Year in front of about 250 people at the Williams County Family YMCA gymnasium in Bryan.

Advanced Rehabilitation Technology, which now includes S&S Directional Boring and OBIC LLC, was founded in 2007 just south of Bryan and is owned and operated by father and son team Tod and Dustin Schlachter.

The three associated companies will soon make the move from their current County Road 17 home to a $2.5 million, 48,000-square-foot facility under construction in Bryan’s east side industrial park. The new building is due to be completed this spring and will accommodate the firms’ 60 to 65 employees, the Schlacters said.

Bob Golding, standing in for Dave Swanson, of Daavlin, which won the Large Business award last year, presented this year’s award to the Schlachters.

Accepting the award was Dustin Schlachter.

“From humble beginnings, we’ve always had a big vision about what is possible,” said Schlachter. “As business people we need to continue to look for new opportunities in the world around us. I can tell you that when I graduated right here in Bryan, Ohio, in 1999, I did not think for one second that I would be in a global business. However, I did know the entrepreneurial spirit was alive and well.”

Schlachter gave thanks to God for guidance and direction, and “the community that supports us.”

“We believe in this community. We believe in the good values and the hard work that comes from northwest Ohio,” said Schlachter. “Our goal is to continue to grow and give back to the community.”

In closing, he thanked members of the company’s workforce. “Our team has stood by us though the ups and the downs. This is all possible because of you. It’s easy to come up with ideas while we’re driving around ... without real smart people, we couldn’t make those ideas happen. Ideas wouldn’t see the light of day.

“I appreciate the hard work and your dedication. All of you are the owners of the award tonight, and you are the winners of this Business of the Year,” he said.

Darlene Phillips began her career in 1979 training in horticulture at Four County Vocational School and furthered her education in floriology at American Floral Arts School in 1986. Today, Artisan offers flowers and custom-designed, high-quality floral arrangements, as well as a line of unique and traditional gifts.

Rod Saunders, of The Bryan Theatre, which won the Small Business award last year, presented this year’s award to the Phillipses.

In brief remarks to Chamber members present during the banquet, Denny Phillips said, “I’m shocked, humbled ... It’s a great honor.” He also paid tribute to his company’s employees for the business’s successes.

Celebrities rally to send boy to Disneyland after bullying video

John King takes on Trump Jr.'s attack: This is dangerous