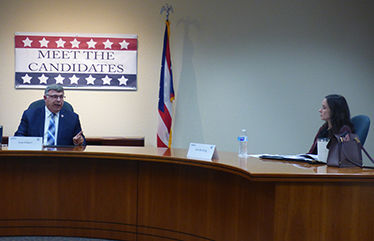 The candidate forum Thursday featured a testy exchange between Republican incumbent commissioner Lew Hilkert, left, and non-party-affiliated candidate Jennifer King over the commissioners’ responsiveness and transparency. King charged she has been denied opportunity to address commissioners in open session and that Hilkert has dodged her phone calls, a charge Hilkert strongly denied. 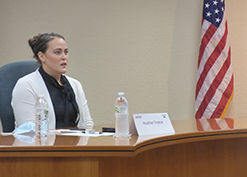 Heather Freese, of Montpelier, is the Democratic Party candidate for Williams County Commissioner. Among her goals if elected “is to create a safe and healthy community.” 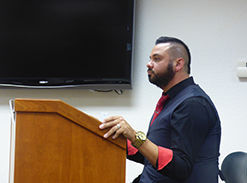 Josh Torres, a Maumee-based small business owner and entrepreneur who served as a chamber of commerce director in the greater Toledo area, served as moderator and posed questions for candidates at the Candidates Night forum Thursday.

The candidate forum Thursday featured a testy exchange between Republican incumbent commissioner Lew Hilkert, left, and non-party-affiliated candidate Jennifer King over the commissioners’ responsiveness and transparency. King charged she has been denied opportunity to address commissioners in open session and that Hilkert has dodged her phone calls, a charge Hilkert strongly denied.

Heather Freese, of Montpelier, is the Democratic Party candidate for Williams County Commissioner. Among her goals if elected “is to create a safe and healthy community.”

Josh Torres, a Maumee-based small business owner and entrepreneur who served as a chamber of commerce director in the greater Toledo area, served as moderator and posed questions for candidates at the Candidates Night forum Thursday.

Incumbent Williams County Commissioner Lew Hilkert and challengers Heather Freese and Jennifer King made their cases for why they are the best choice for commissioner on Nov. 3 in a candidate forum Thursday.

The forum took place in the Bryan Board of Public Affairs meeting room in the Bryan Municipal Utilities office at 841 E. Edgerton St., Bryan, where attendance was restricted due to COVID-19. It featured a testy exchange between King and Hilkert over commissioners’ responsiveness and transparency that included comments by Freese.

The exchange came when King, of Bryan, charged that the commissioners have “repeatedly” denied her an opportunity to discuss her issues with them and have not allowed her on their meeting agenda so that she can address them in open session about ongoing issues she has with the county Job & Family Services office.

King, a non-party-affiliated independent candidate, also pointedly charged that Hilkert, a Republican from West Unity, has not returned multiple phone calls and that she has phone records as proof. Hilkert strongly denied the charge, maintaining King has never left him a message and that if she had, he would have returned the message.

“If you called me, you never left a message, (so) how can I respond to you,” Hilkert said, adding that during an informal meeting, King had “stormed out of the office” while telling Hilkert, ‘I have some issues and if you want to hear about them, you call me.’

“If you have some issues, you talk to me,” Hilkert replied.

During the forum, King said if elected she would propose a resolution to improve access to commissioner meetings.

Freese, a Montpelier Democrat who served as director of the Williams County Elections Office from early 2017 until she resigned to go into private business in mid-2018, said she also felt passionate about the issue of transparency in the commissioners office because of her experiences at the elections office.

Freese said that during her term in the elections office, an elections board member told her that he would meet with “(an unnamed) commissioner to discuss what the board had talked about in an open meeting prior to it going to a public meeting space,” Freese said.

“That may not be you,” she said, pointing at Hilkert, “but it is one of you three (commissioners).”

“It’s important that if we’re discussing items with our board members ... that it continues up the chain in that same manner,” Freese said. She emphasized Friday that she is not inferring any illegality, but only pointing out that public officials, to avoid the appearance of impropriety, should only discuss official business in official open meetings.

Hilkert noted he was not the commissioner to whom she referred, and during his closing statements noted that neither King nor Freese have attended a commissioner meeting since they qualified for the ballot.

“So my question is, how can you claim there’s a lack a transparency when you haven’t heard the discussions and conversations held by the board ...” Hilkert said, adding that commissioners have maintained transparency and that “all decisions we make are made in open session as required by law,” and that all meetings are transcribed and the minutes are posted on the county website for public viewing.

Hilkert has served 13 years as commissioner and also touted his leadership skills and more than 50 years of experience in banking and retail management as qualifications to serve on the board of commissioners, which he said establishes policies, creates and works with balanced budgets and makes appropriations.

“I feel I have a lot of experience, especially in this time of uncertainty with the coronavirus going on. Not knowing where the finances of this county will go in to the future, it’s very, very important to keep experience in the county commission office to guide this county and keep it solid ... I have a passion to keep this county (financially) solvent,” Hilkert said.

As examples, Hilkert cited his experience in dealing with the 2007 recession and with this year’s budget pressures caused by the business slowdown due to the COVID-19 pandemic, saying the commission has made tough decisions to shave $1.4 million from county’s $16 million general fund budget so far this year to meet anticipated reduced revenues.

“I love this county ... I have the experience and a proven leadership record,” he said.

Freese, who works in private business, volunteers on the United Way of Williams County Finance Committee and is pursuing graduate study in business, said her goal in running for commissioner “is to create a safe and healthy community.”

Freeze said she believes she would make an effective commissioner with her two fellow Republican commissioners as during her time as director of the Williams County elections office from early 2017 to summer 2018, she was able to successfully work with the Republican deputy director to find “a common goal ... and the perfect solution,” she said.

Freese also advocates for additional transparency from the board of commissioners, saying she would like to bring commissioner meetings “back to the public space where they belong ... it just promotes democracy.”

“It’s become clear to me a small group of individuals have made decisions in this county and I’m hoping we can make that effort a group effort instead of just that small group,” Freese said.

She said if elected, she would use the handbook as a guide, and that the handbook states that “the most important attribute of a county commissioner is the ability to lead, to listen to the needs of the citizens and other elected officials, to compromise and to develop a consensus on priority issues to improve the county.”

King said she feels the people of Williams County “are going unheard” by the current board of commissioners and called herself a “no-nonsense independent candidate.” She said her fiscal experience derives from her involvement with her family’s locally based business and real estate interests, and promised to advocate and “stand up for the rights of families in this community.”

She called herself a “team player” and “a tenacious force for good, someone who will not be bullied, intimidated or controlled.” She noted while she does not need the job, “... I am confident the county needs me, or someone like me.”

“We need to keep a fresh perspective. The current (commissioners) may have experience, but their ears are not listening ... I feel everyone deserves someone who will fight for them. I desire to be a voice for the people, not a puppet for a political party. I am determined to right the wrongs that have been served unjustly.

“Electing me will serve an eviction notice to the ‘Good Ol’ Boys Club’ of Williams County,” King said.

Several changes from past election forums that were open to the public were in effect for the event due to the ongoing COVID-19 pandemic and restrictions imposed at the state level to limit indoor gatherings to 10 people, according to Dan Yahraus, executive director of the Bryan Area Chamber of Commerce, which produced the event.

The forum took place in the Bryan Board of Public Affairs meeting room and attendance was restricted to the five candidates, a moderator, a timekeeper, the executive directors of the Bryan and Montpelier chambers and a reporter from The Bryan Times.

Josh Torres, who served as moderator, is now a Maumee-based small business owner and entrepreneur. He served as a chamber of commerce director for 17 years in the greater Toledo area.

Yahraus said due to the 10-person restriction, the chamber was not able to extend an invitation to the two candidates in the race for Ohio House District 81 — incumbent Republican State Rep. Jim Hoops and challenger Janet Breneman, a write-in candidate.

The video of the candidates forum for both the commissioner and the sheriff races is available on YouTube at: https://youtu.be/We-ZQc7f6mc.

Is this the strongest US economy in history? CNN fact checks Trump

Israel locked down amid a surge in cases. Here's how it's doing now