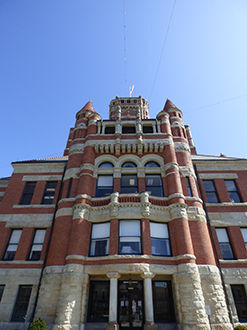 County commissioners are in the very early stages of planning a project to eventually replace all the windows in the Williams County Courthouse in Bryan. Commissioners say some of the windows, especially on the building’s west side (pictured here), let water in during rainstorms, and they want to stop the leaks while maintaining the building’s historical aesthetic. 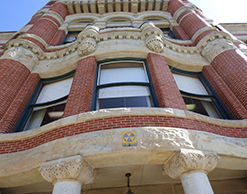 County commissioners are considering a project to replace all the windows in the Williams County Courthouse, beginning with the 24 windows on the building’s west side, including the curbed bank of windows on the second floor of the west side, pictured here.

County commissioners are in the very early stages of planning a project to eventually replace all the windows in the Williams County Courthouse in Bryan. Commissioners say some of the windows, especially on the building’s west side (pictured here), let water in during rainstorms, and they want to stop the leaks while maintaining the building’s historical aesthetic.

County commissioners are considering a project to replace all the windows in the Williams County Courthouse, beginning with the 24 windows on the building’s west side, including the curbed bank of windows on the second floor of the west side, pictured here.

A major window replacement project at the Williams County Courthouse could top the list of county projects this year, county commissioners said during an update of ongoing and new projects at their March 11 meeting.

And because of the potential cost of replacing dozens of windows and trying to maintain the historical aesthetic of the 133-year-old building, it could be the only project — or one of a very few — the county embarks on this year.

“We need to take a look at what we can do and try to maintain historical appearance but to also deal with the lack of efficiencies and cold air coming through the old windows. So, that project alone may be its only project (in 2021) simply because of the cost associated with it,” Commissioner Brian Davis said at the commissioners’ Dec. 17, 2020, meeting, when they discussed the project with County Maintenance Supervisor Gene Woodring.

The county completed an 18-month courthouse reroofing and renovation project in the summer of 2017 that cost $1,576,282.29. That work included repairing the interior and exterior of the courthouse bell and clock tower, turrets, balconies and chimneys and making repairs and sealing the roof, along with reinforcing the support frame for the tower’s huge bell, and additional structural support for the cast-iron body of the motor mechanism for the tower’s four clock faces.

Included in the project was adding bird screens to the exterior openings, tuckpointing the entire courthouse from the tower to the ground, securing and straightening the new 30-foot-long flag pole on top of the tower, plus adding a lightning suppression system.

That work was spurred by age and ongoing leaks and water damage in the tower and areas of the main roof around the turrets, balconies and chimneys.

Wooding told commissioners at the Dec. 17 meeting the building had three leaks, one of which he believed he has fixed. “I will know better in a few months if it is holding. Nothing major, but I think we ought to have that looked at (this) summer ... and then the big one is going to be windows.

“The west side (courthouse windows are) pretty bad,” Woodring said. “The auditor’s office, the magistrate’s office, that whole side. If we get a hard driving rain there, water (actually) comes in around the sills. And then if we get the windows fixed, then we can take the step and get that woodwork and everything redone that has been rotted out over years. I (hate) to redo that woodwork before the windows are done.”

Commissioners and Woodring seemed to agree the windows on the west side of the four-story, 38,245-square-foot, modified French Baroque-style courthouse are a priority. The question is whether to do all the windows at once or do them in stages, and determine the best material to replace them with, while keeping the historical aesthetic of the 160-foot-high, 125-year-old courthouse.

“There are 24 windows on the west side. We wouldn’t necessarily have to do them all. If we are going to start anywhere, (it’s the) second and third floor west side. That’s the most immediate need. The first floor west side could wait if we wanted to,” Woodring said.

Commissioner Terry Rummel said he wanted to see an estimate for the windows in the auditor’s office, “because I think those are the worst. That is where the rot is happening and all of that.”

“And the ones above that in the (Common Pleas) offices and the magistrate’s office around the comer aren’t far behind,” Woodring added.

Commissioners directed Wooding to do some research to find a contractor(s) to do the specialized work and get price quotes.

Commission President Brian Davis said he was not opposed to doing all the windows and associated work “on (one) bid, one shot (and) be done. Money right now, commercial lending, is cheap in comparison to prior years. We can amortize it over a five-year period of time.

“You know, even if it costs a million dollars, you are only talking a couple hundred thousand dollars a year. But you have the building secure. You are saving on your utilities and you are stopping the migration of water and moisture into the building. So I think over time there is value in just doing it in one shot versus piecemealing it. But I guess, first we have to find somebody that does that. That has been the struggle in the past,” Davis said.

According to local historian Kevin Maynard, the first foundation stone for the William County Courthouse was laid at 1:40 p.m., Oct. 1, 1888, and the first brick was laid at 1:27 p.m. Oct. 22, 1888. The cornerstone at the northeast corner of the building was laid on April 30, 1889, the 100th anniversary of the inauguration of George Washington as the first president of the United States.