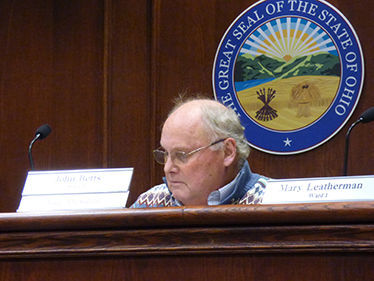 Bryan City Councilman John Betts, who has led the push to get the dissolution of the BPA on the March 2020 ballot, works during a recent council meeting. MAX REINHART/Staff

Bryan City Councilman John Betts, who has led the push to get the dissolution of the BPA on the March 2020 ballot, works during a recent council meeting. MAX REINHART/Staff

Bryan City Council is scheduled to vote this evening on whether to place an item on the March 2020 primary election ballot proposing the dissolution of the Bryan Board of Public Affairs.

The issue has been divisive among city leaders and has wide-reaching implications for the future governance of the city.

Here’s a look at what’s at stake when council meets at 7 p.m. in its chambers in the Don North Municipal Building.

Q: If council votes in favor of the motion, what happens to the BPA?

A: Nothing right away. With passage today, the city will ask the Williams County Elections Board to place the issue on the March 2020 primary ballot. With the election board’s approval, voters will decide on whether they want to keep the board or do away with the five-person governing body.

Q: What does the BPA do?

A: The BPA makes decisions regarding the operations of the community-owned Bryan Municipal Utilities, which includes the electric, water and communications departments.

Q: Who would make those decisions if there is no BPA?

A: Effective 60 days after the vote, Bryan City Council would assume those responsibilities.

Q: What is the benefit of dissolving the BPA?

A: It would certainly save the city $45,000 annually in stipends paid to board members for their service, but how significant that amount is, and whether dissolving the BPA would save or cost the city additional money is debatable. City council member John Betts, who has taken the lead in pushing for the measure, asserts that it would actually save the city at least $68,000 annually in board stipends and administrative overlap, plus other amounts that are not easily quantified from a better streamlined governmental workflow.

However, detractors say any money saved would be inconsequential given that city leaders agree the board has saved BMU customers millions of dollars over the years, and since the city’s annual budget stretches past $50 million between city council and BMU.

Mayor Carrie Schlade also said the city would be responsible for mailing information to city residents, which would cost the city in terms of supplies, postage and time.

Q: What’s the benefit of having a BPA?

A: BPA members closely monitor the revenues and expenditures of BMU, saving customers money. Current members have opined that council members lack the in-depth knowledge of BMU operations, which include hydroelectric and solar power generation, necessary to keep BMU functioning at the most efficient level possible.

Q: Could council sell BMU if it gains control of the utilities?

A: No. City Attorney Rhonda Fisher said any potential sale of BMU would have to be approved by a vote among city residents.

Q: Has there been any attempt in the past to dissolve the BPA?

A: Yes. The issue has been discussed from time to time ever since the BPA was established in 1906. Betts said it was seriously considered in 1968, 1970 and most recently in 1999, when a committee was formed to explore the possibility of government restructuring, but could not come to a unanimous decision to place it on the ballot.

Q: How would this change BMU?

A: Besides answering to city council, very little would apparently change for BMU employees, or customers of the utility. Betts pledged that passage of the citywide vote would result in no reduction in BMU staffing or their pay, and no change in service to customers.

Q: Would dissolving the BPA otherwise affect the structure of city government?

A: Not immediately. Council would remain a five-person body including one representative from each of the city’s four wards, plus an at-large member. However, council could seek to expand through a public vote, if it sees fit to do so.

Council also has the power to create a new department for a city manager, which some have said might be necessary without a BPA.

Q: How is council likely to vote today?

A: It’s difficult to say. Betts figures to vote in favor. But council members Judy Yahraus and Richard Hupe have expressed concerns about the proposal. And council member Mary Leatherman voted against moving the ordinance to its third and final reading during the last council meeting.

For their part, Mayor Schlade and BMU Director of Utilities Kevin Maynard, who remains on paid administrative leave amid an investigation into alleged professional misconduct, have not commented publicly on the issue.

Today’s meeting is open to the public and includes a public participation portion when anyone may speak. Council members have urged residents to attend and share their thoughts.

Schiff uses Trump's words against him at impeachment trial

2020 Jeep Cherokee: It may be a Jeep, but it figures it doesn’t have to be styled like the box it came in