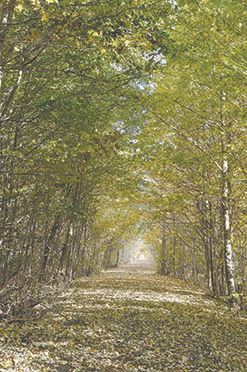 A new 5K walking trail at Opdycke Park, a recreational trail connection between Montpelier and Bible Park and eight miles of paved path from Ney to Bryan were three potential projects discussed at the Tuesday meeting of the countywide Active Transportation Plan committee.

Since forming in June 2018, the group has been working to identify the recreational opportunities that currently exist in the county; determine what future needs, gaps and barriers exist; and develop a list of potential recreational trail projects in the county, along with potential funding sources.

The group is being coordinated by the Williams County Park Board and board member and County Engineer Todd Roth. Though not all were in attendance Tuesday, the group includes representatives from Bryan, Montpelier, Edgerton, Edon, the county health district, county soil and water district, Bryan Park Board, the Ohio Department of Transportation and members of the Northwestern Ohio Rails-to-Trails Association, Inc. (NORTA).

Roth said the county park board plans to develop a 3.1-mile (5K) recreational trail that would begin and end in Opdycke Park near the historic Opdycke Park Barn. He said the trail as envisioned would circle the outer edge of a 58-acre parcel north of the park that was recently leased by the county to a local farmer. The trail would be carved out in the spring, Roth said.

“It’s still in the planning and development stage. But our goal is to stage an annual trail run and fundraiser, beginning in the spring (2020),” Roth said.

Roth also said he is seeking grant funding to continue to upgrade the circa-1800s barn. Opdycke Park is east of the intersection of county roads 16 and J.

“It’s something we’re actively working on,” said Miller, of NORTA, a local non-profit that is developing the Wabash Cannonball recreational trail that runs through Williams, Henry and Fulton counties.

Montpelier Village Administrator Jason Rockey said the village has secured $850,000 in grant funding and is proceeding over the course of the next two years with the Iron Horse River Trail, north of the village along the St. Joseph River.

Rockey also said the village has applied for a $100,000 grant to connect the Wabash Cannonball Trail terminus, at County Road 13, with a pathway along County Road 13 north to Ohio 107 (East Main Street).

That is one of 16 potential projects throughout the county identified on the group’s priority list. The total estimated price tag is more than $10 million, including about half — $5 million — for the so-called Marquis Corridor Pathway, a proposed eight-mile path from Ney to Bryan, connecting to East End Park in Bryan.

Also included in that project list are three walking, bike path or sidewalk installation projects in the city of Bryan that have entered preliminary engineering:

• A walking/bike path on Townline Road from High Street to Fountain Grove Drive, estimated at $850,000;

• A walking/bike path on Fountain Grove Drive from Main Street to Townline Road, estimated at $750,000;

• Sidewalks installed in all neighborhoods in southwest Bryan that do not currently have any sidewalks, estimated at $2.2 million.

No funding sources or timelines have yet been determined for those projects, according to Bryan City Engineer Brian Wieland.

Wieland noted those three projects are separate from a sidewalk project near Bryan City Schools that is being undertaken and at least partially or mostly funded through a Safe Routes to School grant.

Edgerton Village Administrator Zachary Dohner said he is working to coordinate interest and support and to pursue funding for Safe Routes to Schools in Edgerton.

The Maumee Valley Planning Organization is helping coordinate the plan and MVPO staffer Emma Kirkpatrick suggested the group meet again in March 2020, and meet at least quarterly after that.

“We want to keep momentum (going),” she said.

Restaurant study shows how contagious Covid-19 can be