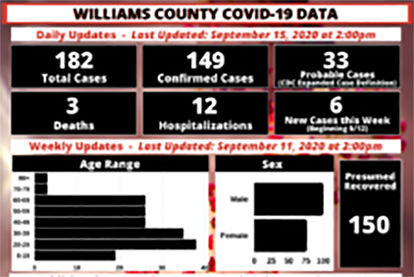 This screengrab from Indicator 1 of the county’s COVID-19 dashboard shows the county has reported 17 new COVID-19 cases in the past two weeks. Two more cases this week would put the county in a higher threat level — from Yellow to Orange — according to the state’s color-coded coronovirus threat level warning system.

This screengrab from Indicator 1 of the county’s COVID-19 dashboard shows the county has reported 17 new COVID-19 cases in the past two weeks. Two more cases this week would put the county in a higher threat level — from Yellow to Orange — according to the state’s color-coded coronovirus threat level warning system.

Due to an upsurge in COVID-19 cases in the past two weeks, Williams County is on the verge of being elevated to a higher threat level in the state’s color-coded coronavirus warning system.

The Williams County Health Department is reporting 17 new cases in the current two-week reporting period. Two more cases this week would trigger one of the seven warning system indicators and move the county from the lowest threat level (Yellow) to the next highest level (Orange).

“We’re starting to see an increase in cases. We’re on the edge ... it’s not going to take much to get to Orange,” Williams County Health Commissioner Jim Watkins said Tuesday.

In July, Ohio Gov. Mike DeWine’s administration rolled out a color-coded coronavirus warning system, designed to advise residents of each of the state’s 88 counties of the threat level of the virus based on seven indicators, including the number of new cases in a two-week period (as a percentage of population).

The indicator uses this incidence proportion so that the data is comparable between counties with different population sizes, explained Victoria Smith, director of health education and preparedness for the Williams County Combined Health District.

“Based on Williams County’s population, the first indicator would be triggered if there are 18.346 or more cases among Williams County residents in a two-week period. The two-week lookback period is based on the symptom onset date for each case. If illness onset data is not available for a case, ODH uses the earliest known data associated with the case,” Smith said.

The county did report a spate of 19 cases in one week at the Corrections Center of Northwest Ohio in late April but that higher number didn’t count in the color-coded threat level because it was in a “congregant” setting and not reflective of a community-wide spread, Watkins said. (Per the state, prison staff and offenders with COVID-19 are counted in the county of the prison, regardless of their actual hometown/county).

“We’re not really sure what has triggered it. It just shows (COVID-19) is still an issue,” he said.

Williams County currently is reporting a total of 185 cases since the pandemic began, with 12 hospitalizations and three deaths.

He was particularly encouraged by the efforts and response of local schools.

“It’s just been a tremendous effort on the part of the schools,” Watkins said. “The teachers, students and staff ... I can’t say enough about how they’ve bought in on (preventive measures). That includes all the sports staff, coaches, ADs (athletic director) and the players.

“We talk (to each school) every week and it’s just been wonderful working with them. It’s just been awesome the way the schools have responded. It’s super impressive. They’ve really been leaders,” Watkins said.

Watkins said the county health department has been stretched thin over the past six months dealing with the COVID-19 pandemic and the ongoing and time-consuming need for contact tracing, while continuing to offer its other slate of services.

He said with the coming flu season, the department is in the process of hiring a full-time public health nurse and part-time interim public health workers to continue to staff its programs, including its flu shot clinic.

A few programs, such as car seat installation, have been temporarily suspended but will be renewed once staffing levels allow.

From the Fields: Greg Galbraith