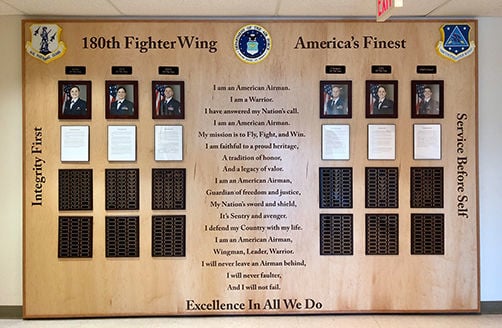 Bryan-based designer Michael Worthington created this Wall of Honor for the 180th Ohio National Guard Fighter Wing, based in Toledo. The Wall of Honor, created in 2019, is a 12- by eight-foot panel that lists all the Wing’s top performers, year by year.

Bryan-based designer Michael Worthington created this Wall of Honor for the 180th Ohio National Guard Fighter Wing, based in Toledo. The Wall of Honor, created in 2019, is a 12- by eight-foot panel that lists all the Wing’s top performers, year by year.

Pilots from the Ohio Air National Guard’s 180th Fighter Wing flew two F-16s over the Bryan and Montpelier hospitals on May 14 to salute health care workers on the front lines against COVID-19. And, whether you saw it or not, the flyover gave a nod to a local man, Michael Worthington.

Worthington, of Bryan, built the 180th Fighter Wing’s Wall of Honor in 2019 to recognize their best and brightest airmen. It’s a massive 12- by eight-foot panel listing all the wing’s top performers, year by year.

“He’s the man,” said Master Sgt. Beth Hollicker, Public Affairs Officer for the 180th. “He worked with our chief’s council and got it right where it needs to be, inspiring new recruits as they walk in.”

“We recognize all of our airmen in one form or another, but we wanted to do something special for the best individuals from our enlisted ranks and NCO (non-commissioned officer) Corps,” Zimmerman said.

The 180th is a reserve unit with 1,200 personnel ready to deploy F-16s whenever and wherever the nation needs them while also maintaining fighters for homeland defense.

“We train every day and have planes locked and loaded on the flight line 24/7,” Zimmerman said. “We also do presidential escorts and ceremonial flyovers when called upon.”

Worthington specializes in laser engraving and has one of the largest flatbed lasers in the area but said the project was a team effort. He did the design and engraving at his shop in Bryan. Pete Grieser, of Heartwood Cabinetry in Archbold, did the sizing, backside hardware routing, top coating and trim. They worked on designs for the 180th throughout 2018 and completed the project in January 2019.

“I had a chance to take a private tour of the base and am completely amazed at what we have in our own backyard,” Worthington said. “I don’t think there are many civilians who are aware of the extent of services and protection they are offering.”

The 180th Fighter Wing has served northwest Ohio and the nation since before World War I, when they fielded biplanes.

One of their own was posthumously awarded the Congressional Medal of Honor in World War II. Addison Baker, of Akron, served with the unit as a pilot from 1932 until he was called to duty with the 328 Bomb Squadron and deployed to Europe in 1942.

On Aug. 1, 1943, Baker was a lieutenant colonel with the 93rd Bomb Group in Operation Tidal Wave, a low-level bombing over Nazi German oil fields in Ploieşti, Romania.

When the group’s navigator crashed, Baker took the lead in a B-24 Liberator named Hell’s Wench and completed the run, even though his plane was seriously damaged and in flames from anti-aircraft guns. His bomber crashed while taking evasive maneuvers after the drop, killing all nine on board. Baker’s remains were never recovered but he has a memorial in the Florence American Cemetery in Florence, Italy.

Protester's message for looters: Something is wrong with you