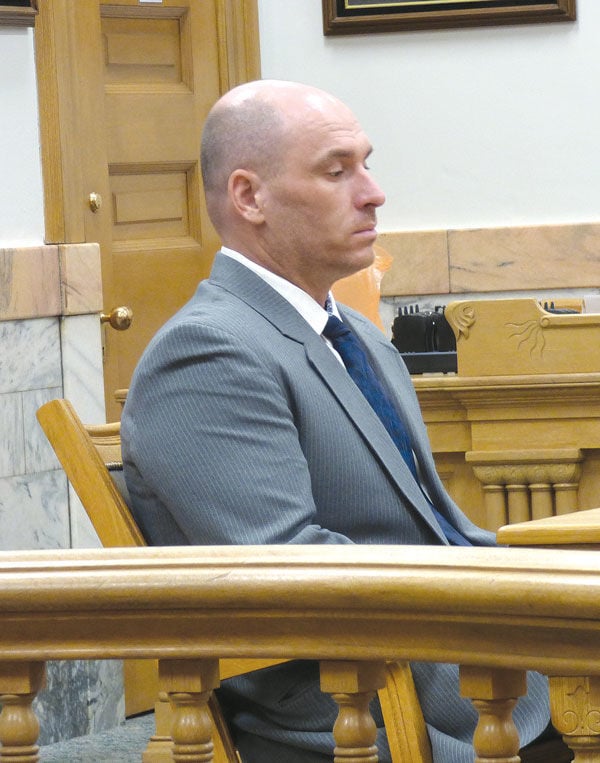 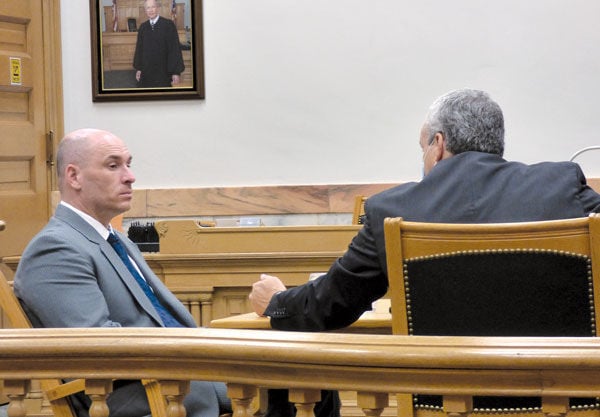 Ryan Dangerfield, left, is seen speaking to Clayton Gerbitz, his defense attorney, prior to pleading guilty to a charge of voluntary manslaughter in the stabbing death of Dylan Bible at Colonial Manor Motel last year.

Ryan Dangerfield, left, is seen speaking to Clayton Gerbitz, his defense attorney, prior to pleading guilty to a charge of voluntary manslaughter in the stabbing death of Dylan Bible at Colonial Manor Motel last year.

Ryan Dangerfield, accused of a fatal stabbing in Bryan last summer, has pleaded guilty to voluntary manslaughter, a first-degree felony, to the objection of the victim’s family.

Dangerfield, 39, was initially set for a trial on a charge of murder. A jury was selected on Monday but the attorneys came to a plea agreement before the trial was set to start on Tuesday.

The agreement was not well received by the family, with Heather Bible, Dylan Bible’s mother, speaking out against it while fighting back tears.

She said she saw security camera footage of the incident, and that it constantly replays in her mind.

“I can’t agree to something because I’ve seen it,” she said. “I don’t feel this is fair.”

She also said it was not her fault, “Bryan PD messed up evidence,” though she offered no additional details for her comment.

Williams County Common Pleas Court Judge JT Stelzer said there are difficult challenges to presenting a case to jury and said Bible’s statements were considered, but not the only input taken into account.

Stelzer permitted the amended charge and accepted Dangerfield’s plea of guilty to voluntary manslaughter as a first-degree felony.

Dangerfield spoke little during the hearing, mainly replying “yes” or “yes, sir” to questions from Stelzer.

The maximum sentence for the charge is between 11 and 16 ½ years in prison, five years of post release community control and a fine up to $20,000.

As part of Sierah’s Law — named after Sierah Joughin, a Metamora resident who was abducted and murdered in 2016 — Dangerfield would be required to report to a violent offender database for 10 years.

A presentence investigation report was ordered and sentencing is currently set for Oct. 22 at 11 a.m.

The hearing comes after the City of Bryan filed for a temporary restraining order late last month to close Colonial Manor in response to what Bryan City Attorney Rhonda Fisher called ongoing “criminality.” A hearing on the injunction is set for Nov. 19 and the owner is working on cleaning and maintenance with the intent to sell the property.