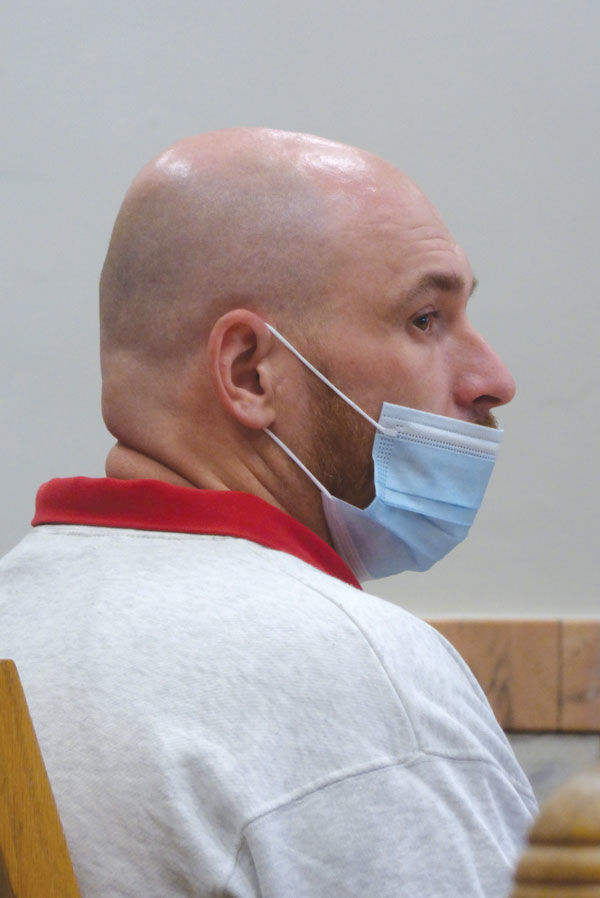 Ryan Dangerfield is pictured during his sentencing hearing on Thursday. He received a minimum of 11 years in prison for the death of Dylan Bible at the Colonial Manor Motel on June 23, 2019. 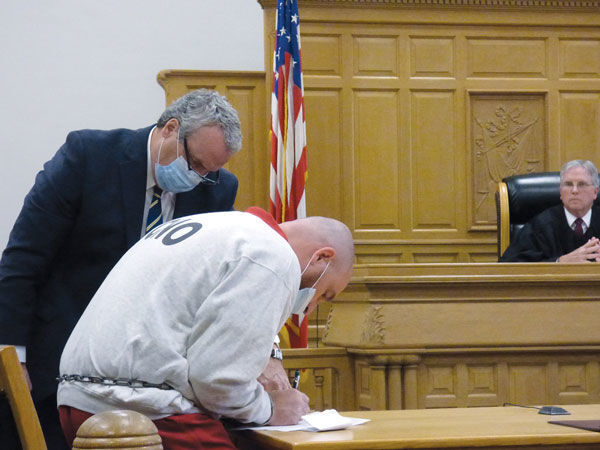 Ryan Dangerfield, foreground, signs papers Thursday in Judge JT Stelzer’s courtroom in the Williams County Courthouse, affirming he understands he will need to register as a violent offender in accordance to Sierah’s Law, named after Sierah Joughin, a Metamora resident who was abducted and murdered in 2016. Pictured beside Dangerfield at left is his defense attorney, Clayton Gerbitz. Stelzer is pictured at right.

Ryan Dangerfield is pictured during his sentencing hearing on Thursday. He received a minimum of 11 years in prison for the death of Dylan Bible at the Colonial Manor Motel on June 23, 2019.

Ryan Dangerfield, foreground, signs papers Thursday in Judge JT Stelzer’s courtroom in the Williams County Courthouse, affirming he understands he will need to register as a violent offender in accordance to Sierah’s Law, named after Sierah Joughin, a Metamora resident who was abducted and murdered in 2016. Pictured beside Dangerfield at left is his defense attorney, Clayton Gerbitz. Stelzer is pictured at right.

Ryan Dangerfield’s expressions of remorse and his attorney’s attempt to color his client’s action as gray didn’t save him from a minimum of 11 years in prison.

Dangerfield, 40, was sentenced on Thursday morning in the stabbing death of Dylan Bible, 23, on June 23, 2019, at the Colonial Manor Motel in Bryan. Dangerfield pleaded guilty to voluntary manslaughter in September.

That means he will be released from prison in a minimum of 11 years, but the Ohio Department of Rehabilitation and Corrections can rebut the release under certain circumstances and impose additional time up to the 16 ½-year maximum.

Under Sierah’s Law — named after Sierah Joughin, a Metamora resident who was abducted and murdered in 2016 — Dangerfield will have to register as a violent offender for 10 years, though he can challenge that requirement.

He will receive credit of 486 days for time he’s already served.

“No matter what we do today, somebody is not going to be happy,” Stelzer said prior to handing down the sentence. “Nothing we say or do will make everything right.”

Dangerfield read prepared remarks before his sentencing, speaking for a time directly to Bible’s mother, Heather Bible, who was absent from the courtroom.

“I’m very sorry for what happened to your son,” he said. “I never meant for this to happen.”

Dangerfield also said he let down his own children, and expressed remorse for not being able to be there for them as they grow.

But, he said he would do everything he could to make sure he could provide for them, adding that he was clean of drugs and liked being clean.

“I’ll be a better person the rest of my life,” Dangerfield said.

When Stelzer later asked Dangerfield about his children, he said he had five, two were on their own while another two lived with him in 2019 when he killed Bible and another had yet to be born at the time.

He said that on the night of the killing, he was at Colonial Manor Motel for a friend of his, whom he wanted to help get off drugs.

“I didn’t go there to hurt anyone,” Dangerfield told Stelzer. “I’m truly sorry for what happened.”

Many members of Dylan Bible’s family also spoke during the sentencing.

Their tearful stories told of pain and misery caused by the death.

“My brother was far from perfect,” Jasona McCullough, Bible’s sister, said. “But he was never a hateful person.”

He was, instead, a helpful person, who would drop everything he was doing if you called him to ask for help, she said.

Bible did have a drug problem, but that did not make Dangerfield’s action OK, McCullough said.

She said her own children are traumatized. Her 7-year-old son has nightmares about the incident and says he should have done something to help.

“It’s so hard not to teach my 7-year-old not to hate this man,” McCullough said.

She called Bible the “glue” that held together the relationship among the siblings.

Since Bible’s death, there have been two suicide attempts in the family, McCullough added. She, herself, has to take medication to get through the day but there are still days she can’t get out of bed.

Heather Bible did not appear in the courtroom Thursday, but part of a video message she recorded was played before the court.

She addressed Dangerfield through most of it, saying she watched footage from a security camera that no one knew was still functioning. That footage showed Dangerfield did not act in self defense.

However, she said she forgives Dangerfield.

“I forgive you,” Heather Bible said. “I know Dylan; he would have forgiven you for killing him.”

However, she said, Dylan would not have forgiven him for the hurt his family has been through because of Dangerfield.

Heather Bible said she was there when it happened, that she held her son as he died and tried to perform CPR without success.

Stacey Stiriz, Williams County assistant prosecutor, said it was a “horrible experience” for both Bibles.

“Those are images no parent should have to see,” she said, adding she was unsure how a parent could get the images out of their head. “It tore their family unit apart.”

Clayton Gerbitz, Dangerfield’s defense attorney, said the entire event was a “tragedy” and that he could feel “so much sorrow” from Bible’s family.

He said it was tragic on both sides, that no one was happy.

Dangerfield fell into “thug culture” that involves drugs, sex, weapons and violence, that people existed without direction, living their lives wherever “the wind takes them.”

In a black and white world, giving Dangerfield the maximum sentence makes sense, he said.

“We don’t live a black and white world, there’s a lot of gray,” Gerbitz said.

He said even the prosecutor saw the gray, as shown by her willingness to offer a plea deal on the same day they were to begin the jury trial.

It was also shown in evidence she left out, such as a video that Gerbitz said showed Bible rushing at Dangerfield with what he believed was a wrench.

“There was a lot more to this event,” he said.

Colonial Manor Motel was shut down in August after the city filed an injunction, citing ongoing “criminality” at the motel.

Earlier this week, The Bryan Times confirmed that Shree Hari Ohio Hospitalities LLC has signed a purchase agreement for the motel. Three principles in the business were identified as Vicktor and Kunal Patel, who are father and son, and a third business partner. They currently operate a motel in East St. Louis, Illinois.

Family has heartbreaking dilemma amid pandemic

These Democrat officials went against their own Covid-19 guidance