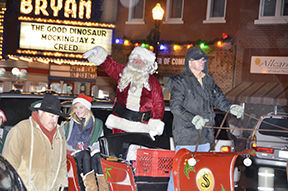 Santa waves during a past Santa Arrival Parade in downtown Bryan. The city’s Designated Outdoor Refreshment Area program will be in effect during this year’s parade. 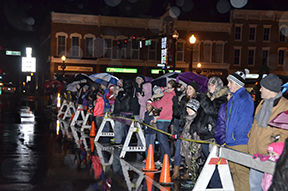 Spectators line High Street during a past Santa Arrival Parade in downtown Bryan.

Santa waves during a past Santa Arrival Parade in downtown Bryan. The city’s Designated Outdoor Refreshment Area program will be in effect during this year’s parade.

Spectators line High Street during a past Santa Arrival Parade in downtown Bryan.

Depending on where you stand for annual Santa Arrival Parade on Friday, Nov. 26, you may be able to legally raise a toast to the season with your favorite alcoholic beverage as Santa makes his way to downtown Bryan.

Bryan City Council on Monday unanimously approved making the city’s Designated Outdoor Refreshment Area a permanent fixture, but not before councilman John Betts expressed a few concerns with the program, predominantly as it pertains to the Santa parade.

Betts conceded that it was perhaps too late to suspended the DORA rules — which allow patrons to purchase alcoholic beverages in a specially marked cup and carry and consume that beverage in much of the downtown courthouse square area — during the parade, but he said he would like that to be considered for next year’s event.

The city did suspend the DORA during the three-day downtown Jubilee festival in June. And while the city gave the Bryan Area Chamber of Commerce at least 30 days’ notice of the suspension in that instance, Mayor Carrie Schlade noted Monday that it was her understanding that forewarning was not necessarily a legal requirement.

Schlade also reiterated that there have been no safety or sanitation issues since the DORA went into effect at the start of the calendar year.

Betts, however, said the issue was not a safety issue, but a “philosophical” issue that he said more than one resident has expressed, and he agreed, saying, “I don’t want to bring my kids down to see Santa Claus with people drinking.”

Betts also said he wanted to emphasize the need for businesses to make sure their customers follow the DORA rules, in particular the rule that once a customer purchases a DORA beverage, they must leave that establishment. He said that he himself had asked an employee at one business whether he could keep his DORA drink on the premises and consume it there.

“The answer was not the right one,” Betts said, although he noted the employee in question appeared to be a relatively new hire.

Schlade said she would work on ensuring that businesses are educating new employees about the rules.