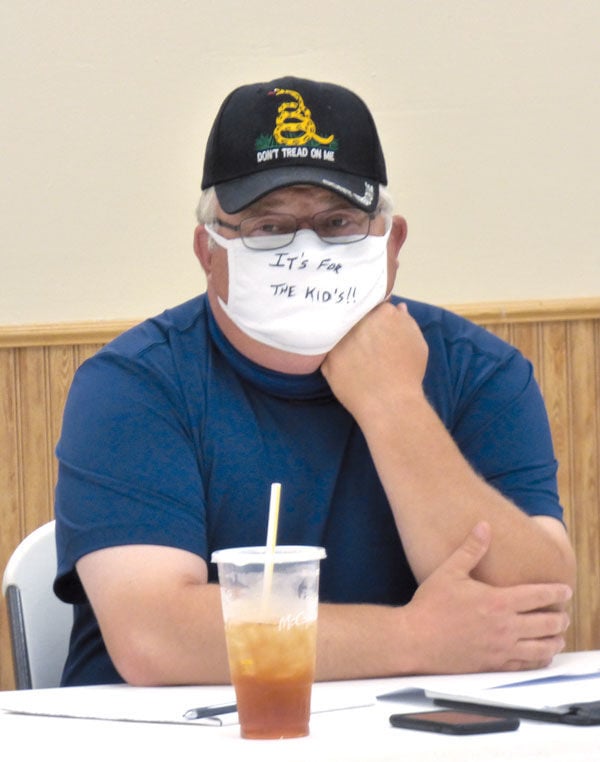 Fair Board President Matt Kennedy is pictured at a special board meeting on Thursday evening. The phrase written on his mask, "It's for the kid's!!" (sic.) was a common refrain at the meeting, where the possibility of canceling the fair was discussed. 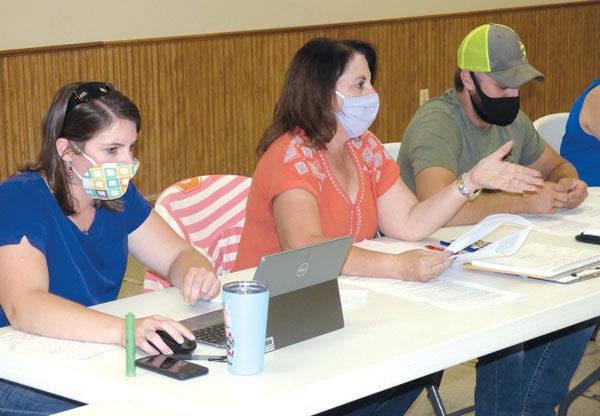 Pictured at a special fair board meeting Thursday, from left, are Stacey Perry, Williams County Ohio State University Extension educator and 4-H youth development, Pam Goll and Alex Baker, both board members. Goll laid out some plans for how the junior fair could look in light of the COVID-19 pandemic.

Fair Board President Matt Kennedy is pictured at a special board meeting on Thursday evening. The phrase written on his mask, "It's for the kid's!!" (sic.) was a common refrain at the meeting, where the possibility of canceling the fair was discussed.

Pictured at a special fair board meeting Thursday, from left, are Stacey Perry, Williams County Ohio State University Extension educator and 4-H youth development, Pam Goll and Alex Baker, both board members. Goll laid out some plans for how the junior fair could look in light of the COVID-19 pandemic.

MONTPELIER — With $50,000 secured from the state, the Williams County Agriculture Society (fair board) is working out the details of how the fair will be run this year.

A special meeting of the board on Thursday was called after Ohio Gov. Mike DeWine issued an order calling for all county fairs to strictly be junior fairs, canceling everything but 4-H and FFA shows, due to the COVID-19 pandemic.

According to the order, food vendors will still be permitted while a curfew of 10 p.m. was also established, unless a judging or auction takes longer.

The board laid out some plans Thursday regarding how to go forward with a junior fair in light of the pandemic and governor orders.

Ideas included releasing the animals after the show is over and the issuance of wristbands to help limit the people in the stands.

The board has many wristbands in storage and voted to utilize all of them and purchase more, if needed, in order to give six wristbands to each exhibitor for immediate family and assistants.

“If you don’t have a wristband on, you can’t be in the show barn,” board member Pam Goll said. “We would also have to have wristbands for us, the junior fair board and any volunteers that we have. Those are the only people allowed in the barn. No one is allowed to come and spectate.”

An estimated 3,600 wristbands will be needed.

Goll laid out several ideas for how to run the fair, utilizing what other fairs are doing or planning to do.

“I penciled the show schedule to be able to pace the shows out so that we have time between the shows so the pavilion can be cleaned,” she said.

Goll said she talked to someone who was willing to purchase the animals with the exception of poultry and rabbits that are going direct or going through the sale. The buyer will send multiple trucks to pick up the animals after the show.

The sale was another item the board discussed, as it would be much different this year. No animals will be present at the auction, which will now take place on Thursday instead of Saturday.

Goll suggested maybe taking photos of the animals when they are shown and projecting the photos on a screen at the pavilion during the auction.

“Part of the proposal is breeding animals can be hauled in and go the day of the show, not stay here,” she said. “For the horse show, they’re doing all the shows one day on Sunday ... At the end of the evening on Monday they can go home.”

Goll said they could still do showmanship, but the board voted to change the showmanship sweepstakes to a skillathon, as the animals would be shipped out after their individual shows.

When it comes to social distancing, Matt Kennedy, fair board president, said the show superintendent should take care of it.

“If they start to notice overcrowding, people sitting too close together, maybe people not wearing masks, a large amount of them, they can always stop the show and say: ‘We’re going to take five minutes, maybe some people forgot to put a mask on, for this show it should only be family of the exhibitors. So, we’re going to stop the show so nobody misses anything and please go ahead and do what you need to do,’” Kennedy said.

She still wants to recognize them, but not have a display like usual in one of the buildings, as there would likely be little traffic.

“Instead, ask kids to submit a photo of kids with their still project ... and create a PowerPoint slide that maybe we can project in the show pavilion and also put it on social media,” Perry said. “I don’t want our kids to feel like they aren’t important because they didn’t take livestock.”

Board members also discussed whether or not it would be cost effective to even have a strictly junior fair, which became something of a non-issue shortly after the meeting.

Matt Kennedy, fair board president, has said the cost of running a junior fair is estimated at around $100,000, which included utilities, insurance, judges, veterinarians and prizes.

At the meeting, Kennedy said they hadn’t received a promised $50,000 from the state government to run the fair, and board member Scott Carroll had heard a rumor they weren’t going to get it.

That and fears of potential bankruptcy and an end to the fair led the board to vote to cancel the fair if they didn’t receive the $50,000 from the state by Aug. 20. Only three board members present voted against the idea.

However, about an hour after the meeting, Kennedy checked the bank and found the money had been deposited earlier in the day, meaning the board can move forward with its plans.

The board voted to allow some camping at $20 a night, though it is limited to people exhibiting animals, food vendors and show directors.

Everything but the animal exhibits — such as band and cheer competitions, a bike giveaway, youth night and even open goat and lamb open shows — were canceled.

The state order allows harness racing to continue, but without spectators.

Kennedy also brought up ticket pre-sales for the grandstand events that have been canceled, which have already brought in $5,605.

Board member Davinna Nickloy suggested they rollover the tickets into next year’s event. The board voted in favor of that suggestion.

Jamaica's sprint queens: 'I think we represent the hope of so many girls from the country'

Elif Shafak: To be a writer in Turkey is 'heavy'