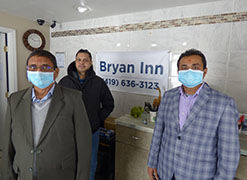 At top, two of the new owners of the Bryan Inn (formerly the Colonial Manor Motel) on East High Street, in Bryan, are Vikram Patel, left, and Kunal Patel, right. The third owner, Priti Patel, is not pictured. The new on-site motel manager is Rosh Soni, center. At left is a new sign for the new Bryan Inn, which is now open for business. 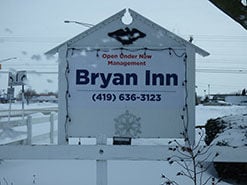 At top, two of the new owners of the Bryan Inn (formerly the Colonial Manor Motel) on East High Street, in Bryan, are Vikram Patel, left, and Kunal Patel, right. The third owner, Priti Patel, is not pictured. The new on-site motel manager is Rosh Soni, center. At left is a new sign for the new Bryan Inn, which is now open for business.

The former Colonial Manor Motel on East High Street has new owners and a new name — the Bryan Inn.

As the Colonial Manor Motel, the 51-room motel at 924 E. High St. was the site of a fatal stabbing in June 2019 and drew the ire of the city for years of ongoing complaints and being a well-known magnet for crime, drugs and prostitution.

The motel was declared a public nuisance and closed in August 2020 after more than 200 police calls to the address since the motel came under new ownership in May 2016. In addition, the Bryan Fire Department has responded to more than 40 calls since 2016, and there have been 86 recorded violations in that time period by the Ohio Fire Marshal, Bryan City Prosecutor Rhonda Fisher said at the time.

Fisher said as part of the temporary closing, the city requested that owner Bhagavandas (“Bee”) Patel sell the motel. She acknowledged that it was an “unusual” step and the first time the city has taken such action in years, but maintained it was “necessary because of the issues of criminality going on there.”

The new owners are Vikram Patel, his son Kunal and Priti Patel, operating under Chicago-based Shree Hari Ohio Hospitalities LLC. In an interview with Vikram, Kunal and new motel manager Rosh Soni with The Bryan Times in the motel office Wednesday, Vikram Patel said they received their operating permit last week and the motel is now officially open for business.

In fact, Kunal and Vikram laughed when they noted that though the motel technically wasn’t open yet, they accepted their first paying customer Tuesday night — a motorist who was caught in the evening snowstorm.

Kunal and Vikram both acknowledge they are familiar with the motel’s past negative issues but say they plan to work hard and be vigilant to operate lawfully and change the motel’s reputation.

They brought in Soni, they said, because he is an experienced motel manager who understands how to meet the potential challenges. Per the Ohio Revised Code, the motel is considered a “transient” motel, in which guests may stay in a room a maximum of 30 days.

The Patels said they have worked with city officials and the state fire marshal over the past several months to obtain necessary permits and approvals to purchase the motel, and were particularly complimentary of Fisher, Mayor Carrie Schlade and their Bryan attorney, John Shaffer, for their efforts.

Kunal said it was those extra efforts that convinced them to purchase the motel despite its past reputation.

“We knew the challenges it would take to turn this around. But everyone was so (accommodating). That’s why we rebranded it the Bryan Inn,” Kunal said.

“We want it to be a new start for Bryan. That’s why we wanted to incorporate the town’s name into the (motel’s) name,” added Vikram.

Kunal and Vikram both live in the Chicago suburbs with their families, and Kunal laughed when he said they had heard of Bryan because they knew Dum Dums suckers were made in Bryan.

“We were looking for a (business) opportunity and we saw (the motel for sale). We saw the (Bryan) name and that drew us here,” Kunal explained.

For the Patels, this is their third motel, all purchased in the last three or four years, Kunal said. They own a motel in Illinois, just outside of St. Louis, and one in Kentucky.

“We were looking to expand our brand. We saw this as a new opportunity,” Kunal said.

Kunal said they purchased the motel for $1.355 million and are in the process of cleaning the property, adding new linens, new equipment and new paint and making electrical upgrades. They’ve hired two local people as a housekeeper and maintenance man, and Soni said they are seeking to hire several more employees for housekeeping and the front desk.

Interestingly, Vikram said he moved to the U.S. from India 22 years ago so that his daughter and son could attend school in the United States. He describes himself as a devout Hindu and is a licensed life insurance agent for New York Life, while Kunal earned a pharmacy degree from Midwestern University in Downers Grove, Illinois, outside Chicago.

“Already in record time they’ve made the changes we requested and the state fire marshal requested ... We’re hopeful they bring a new management philosophy to the motel and bring new, quality rooms to Bryan,” Schlade said, though she also added the city has kept its original temporary injunction granted by the court that originally closed the motel “on the books,” so if there are issues, the injunction could be reinstated.

Bhagavandas (“Bee”) Patel continues to own the Plaza Motel, at 1604 S. Main St., Bryan, but Schlade said that motel doesn’t have the anywhere near the number of calls or serious issues the Colonial Manor did, which she said appears to be due to better on-site management at the Plaza.

Ohio school is staying open with these safety measures

A fiery Lady Day in 'U.S. vs. Billie Holiday'