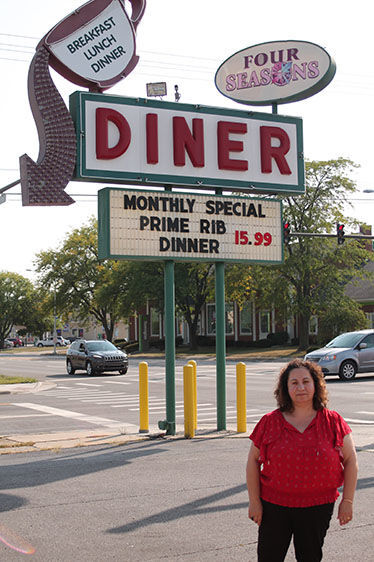 Dafni Manolas, who owns Four Seasons restaurant in Bryan with her husband, Chris, stands in front of the restaurant’s distinctive neon-lit coffee cup sign. The Manolases are celebrating the fact they have paid off the previous owners and now own the building outright. 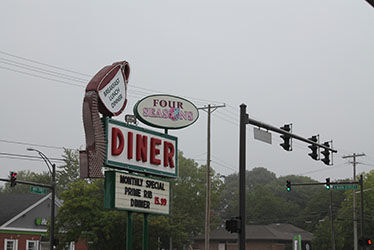 Pictured is the recognizable coffee cup sign outside Four Seasons diner in Bryan.

Dafni Manolas, who owns Four Seasons restaurant in Bryan with her husband, Chris, stands in front of the restaurant’s distinctive neon-lit coffee cup sign. The Manolases are celebrating the fact they have paid off the previous owners and now own the building outright.

Pictured is the recognizable coffee cup sign outside Four Seasons diner in Bryan.

Four Seasons, located at 233 S. Main St., has been a popular community staple for many years. And now current owners Chris and Dafni Manolas have a new reason to celebrate their popular restaurant — they have paid off the previous owners and now own the building outright.

This is very significant for the husband and wife ownership team.

“Working so hard all these years, it feels like we did something,” said Dafni. “Finally, working so hard and now it’s paid off — it can stay in the family so we can still continue the business for years.”

Originally opened as Lester’s Diner in 1965, the Manolas family changed the name when they took over in 2011. Dafni said it’s a relief to have the debt paid off and own their building outright, so they can rest easy knowing the business is secured in the family.

“You don’t know what’s going to happen. You see, you don’t want to lose everything overnight,” Dafni said.

Chris and Dafni run the business with the help of their three children, Tommie, Steve and Irene. The Manolases have been in the restaurant business in America since the 1970s, when Chris came over from Greece and started restaurants in New York City. In fact, his coffee shop, “Disco Donut,” was one of the locations in New York used in filming the Martin Scorsese film, “Taxi Driver.”

Now that they own the building, the family has some new goals for renovation.

“New floors, new booths. But not yet,” because for now the COVID-19 pandemic has put their plains on hold, Dafni said. “January, maybe March, we should be doing some construction.”

The Manolases plan to keep the ‘50s diner theme of the restaurant and just make some needed cosmetic changes. Steve said that they do buy new equipment as they need it. He also plans to replace the neon in the outside sign with LED, as neon can be harder to maintain and can get damaged from the cold winters, he said.

The Manolases also have Four Seasons Family Restaurants in Holiday City and Pioneer. And true to its name, Four Seasons restaurant is open through all four seasons, except on Christmas Day and Thanksgiving Day. Their hours are 7 a.m. to 9 p.m., seven days a week, and the menu includes all-day breakfast, lunch and dinner.

Another California school district mandates vaccines for kids 12 and up. Will the whole state follow suit?