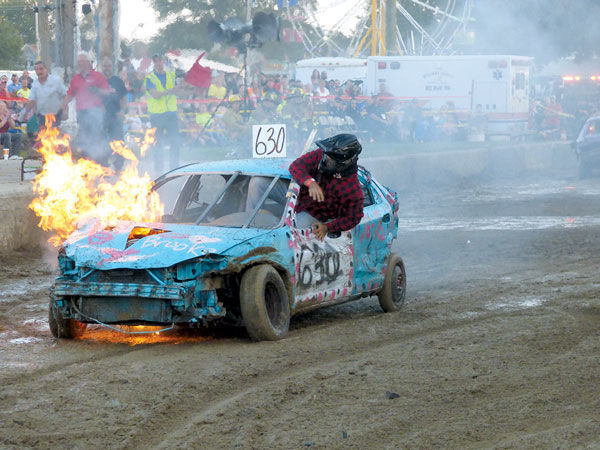 A man makes a quick escape from his vehicle after it catches fire during the 2018 demolition derby at the Williams County Fair. The derby will be back this year, as will truck pulls and horse pulls after a hiatus of several years. 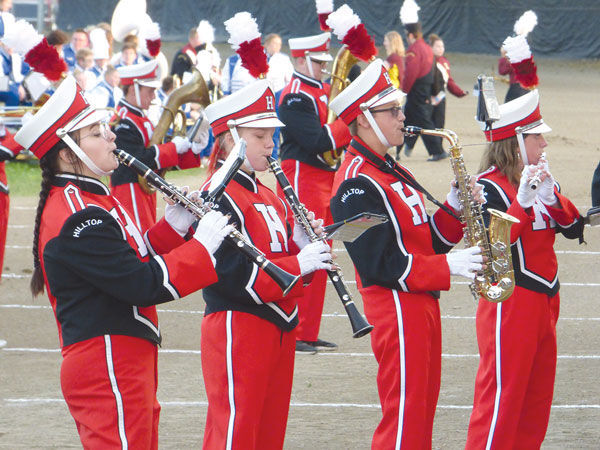 The high school band showcase will return to the grandstand at this year’s Williams County Fair, which runs from Sept. 11-18.

A man makes a quick escape from his vehicle after it catches fire during the 2018 demolition derby at the Williams County Fair. The derby will be back this year, as will truck pulls and horse pulls after a hiatus of several years.

The high school band showcase will return to the grandstand at this year’s Williams County Fair, which runs from Sept. 11-18.

After a hiatus of several years, horse and truck pulls are returning to the Williams County Fair this September.

Matt Kennedy, president of the Williams County Agricultural Society (fair board), said everything was going as planned to have a full fair this year from Sept. 11-18.

Last year, the COVID-19 pandemic resulted in a fair that was strictly youth livestock shows with a few food vendors.

This year, the livestock shows will continue, as always, with the schedule being the same as 2019, Kennedy said.

Near-daily entertainment will also be available at the grandstand, though Kennedy said they are looking for a last-minute addition for the first day of the fair.

“The combine derby originally set for opening day on Saturday was canceled due to lack of entries,” he said. “We’re seeing what we can move into the grandstands kind of last minute now.”

Horse pulls are returning to the grandstand on Sunday.

The county had horse pulls — in which harnessed horses pull a weighted sled— for several years before the board dropped it around five years ago.

“We stopped doing them for a few years because of the cost and not enough interest for entries,” Kennedy said.

This year, someone came to the board and offered to run the horse pulls if he could do it in front of the grandstands.

The truck pulls will return for the first time in several years on the last Saturday of the fair.

Similar to the horse pulls, the truck pulls ended several years ago, though for a completely different set of reasons.

The pulls have returned this year after a new group offered to run it.

Under the new group, the rules have changed and will hopefully allow the event to not lose money.

“The payouts are 80-20 on entries, not a defined purse,” Kennedy said.

The rest of the grandstand lineup looks similar to years past with Monday being the county high school band showcase; Tuesday is the cheer competition; Wednesday will be the harness racing; Thursday is youth night; Friday is the demolition derby; and Saturday is the truck pulls.

“Most of it is pretty standard for other years,” Kennedy said.

In addition to the grandstand, free entertainment will be set up on the north side of the Gillette Building, similar to years past.

Daily entertainment will include country, bluegrass and classic rock music, while a couple of church groups will come in on Wednesday.

“On kids day, we’re doing some karaoke and a magic show,” Kennedy said.

Attendance is expected to be about the same from 2019.

“I don’t expect it to double. I expect it to be the same, maybe a little more,” Kennedy said. “People are tired of being cooped up; they want to get out and do stuff.”

Nurse says patients in ICU with Covid-19 begging for vaccine

WaPo: This is what Trump's PAC is spending its money on

Illegal border crossings continue to spike, as do COVID cases