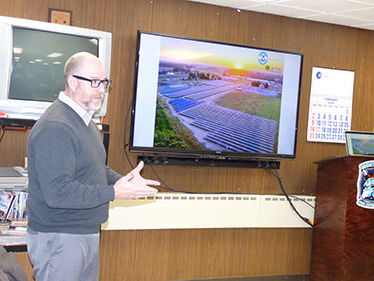 Montpelier Village Administrator Jason Rockey updates residents Thursday about the villages new 2.79-magawatt solar field, which is complete and ready to go online soon. Power produced by the 8,456 solar panels — on a 10 acre site south of East Main Street, between County Road 13 and the railroad tracks — will go onto the village’s power supply, helping the village save during during times of peak energy demand. Rockey said. 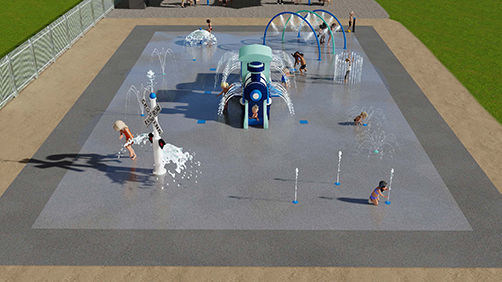 This architectural rendering shows what the new Montpelier splash pad will look like when it's complete this summer. It's one of four ongoing projects village officials spoke of during a public meeting Thursday. The splash pad will be free and open to the public, with features including a system of sprinklers, fountains and equipment intended for use primarily for those ages 5-12, including a 22-foot-long “locomotive,” built on top of 7/8-inch foam for safety. The village pool will remain open this summer as well, village recreation director Sandy Gordon said.

Montpelier Village Administrator Jason Rockey updates residents Thursday about the villages new 2.79-magawatt solar field, which is complete and ready to go online soon. Power produced by the 8,456 solar panels — on a 10 acre site south of East Main Street, between County Road 13 and the railroad tracks — will go onto the village’s power supply, helping the village save during during times of peak energy demand. Rockey said.

This architectural rendering shows what the new Montpelier splash pad will look like when it's complete this summer. It's one of four ongoing projects village officials spoke of during a public meeting Thursday. The splash pad will be free and open to the public, with features including a system of sprinklers, fountains and equipment intended for use primarily for those ages 5-12, including a 22-foot-long “locomotive,” built on top of 7/8-inch foam for safety. The village pool will remain open this summer as well, village recreation director Sandy Gordon said.

MONTPELIER — One project is blazing new trails in the village, while another is expected to make a big splash this summer. There is electricity in the air for a third project and a fourth will ensure a separation between wastewater and stormwater.

“This really moves us forward,” mayor Steve Yagelski said during the two-hour open-to-the-public meeting at the fire station where more than a dozen residents heard updates on the projects.

In one, the village envisions residents being able to take a paved bicycle path around and through the village to a new downtown park created by the demolition of nearly a block of dilapidated buildings.

Plans are already underway and grant funding secured to link that path through the village — being dubbed the Iron Horse Trail — with the Wabash Cannonball Trail that runs between Toledo and Montpelier.

It’s all about “connectivity,” councilman and downtown business owner Chris Kannel said during an update on the Iron Horse Trail and the village’s participation in the Active Transportation Plan, a regional effort to create new recreational opportunities in the county and link them with existing ones.

The village currently is seeking bids and hopes to choose an engineering consultant for the Iron Horse Trail now that it has received approval of a state Transportation Alternatives Program (TAP) grant of $850,000 in fiscal year 2023 to help pay for construction.

The village initially sought $1.5 million for a 2.1-mile trail, but with the reduced grant amount has scaled back the route to something around 1.1 miles, roughly from the Williams County Fairgrounds to West Main and Monroe streets.

Several residents at the meeting questioned the routing of the trail as depicted in preliminary drawings, north of West Main Street near the St. Joseph River. However, Kannel said the routing is not final and the village is still in the process of picking a consulting engineer, who will help the village — with further input from residents — create the final Iron Horse Trail route.

Part of the vision for the trail in process now includes demolishing three vacant downtown buildings, located at 400-414 W. Main St., to make way for a trailhead park and open space that will tie in with Iron Horse Trail. The demolition does not include the single building at 416 W. Main St.

There are no architectural drawings yet for the park that will take the place of the buildings on the southwest corner of West Main and Jonesville streets, but it is envisioned as a green space for concerts, movies or other community events, Kannel said.

That project is being funded by $89,395 from the Ohio Department of Natural Resources’ Clean Ohio Trails Fund, and Village Administrator Jason Rockey said he expects to cover the balance of the estimated total project cost of $119,194 with local in-kind contributions.

In a separate possible project, Kannel said the village is discussing the possibility of a pedestrian trail between Municipal Park and Montpelier Schools through the Montpelier Historic Tree Grove on Henricks Drive.

“We want this straight line connection for (student) safety,” Yagelski said, though no plan or funding for that link has been developed yet.

Expect a new 3,849-square-foot splash pad be open in July, just in time for Bean Days, according to Sandy Gordon, recreation director with the Village of Montpelier Parks and Recreation Department, who is spearheading the $350,000 project.

Gordon said the equipment is ordered from a Texas-based company called Water Odyssey and work has already begun on dedicated water lines to provide “potable” — i.e. clean, not recycled — water. She said the “drop-dead date” — the date she anticipates the splash pad must be completed — is Thursday, July 16, though it could open earlier if complete. Bean Days, the village’s biggest summer event, is the weekend of July 17-19 this year.

The splash pad is located in Municipal Park, on the site of a former tennis court, just east of the pool — which she emphasized will remain open. The splash pad features a system of sprinklers, fountains and equipment intended for use by children, including a 22-foot-long “locomotive” with three slides on top of 7/8-inch foam.

The splash pad is aimed at ages 5-12 though it is open to the public and admission is free. It will be the only one in Williams County, making it a regional draw for families, noted Kannel.

The village will initially pay $50,000 through the park budget, but will issue bonds for the remaining $300,000. Gordon said she chose Water Odyssey because it uses high-quality stainless steel manifolds and brass valves, rather than plastic, which extends the life of the water management system, reduces maintenance and stands up to extreme climates.

The pool will begin its 62nd year of operation and is showing its age, Gordon said. In addition, while the splash pad is not required to have lifeguards, the pool always needs trained lifeguards and it’s always an issue finding enough of them, Gordon said. She said there is a lifeguarding class being held in late May at the Williams County Family YMCA in Bryan and she needs Montpelier teens and residents to take the class and become Montpelier pool lifeguards.

Rockey said the village’s new solar field is a partnership between the village, Entri Foundry LLC, of Orlando, Florida, and Akron-based FirstEnergy. It is complete but minor issues need to be worked out with FirstEnergy to bring the field online, he said.

The 2.79-megawatt solar site is on 10 acres south of East Main Street, between County Road 13 and the railroad tracks. The 8,456 solar panels are a combination of 7,616 fixed-axis modules and 840 fixed-tilt modules, which swivel to follow the sun.

He said while it’s impossible to determine a fixed dollar amount of savings for individual village households, “it will have a direct effect on our bills going forward.”

“The solar field has the potential to save the village about $80,000 a year,” Rockey said.

In addition, the cost of that power is set and will not rise during the contract period, making it a good hedge against inflation or future increases in the cost of power on the market, Rockey added.

Just as important, Yagelski said, is the solar field makes Montpelier more attractive for businesses that are looking to move to the village or want to expand. He said businesses are always looking for sites that are environmentally sustainable and “green.”

“This looks good for that. This solar field is a selling point for the village,” Yagelski said.

He said the seven-phase project began in the late 1980s as a result of an Environmental Protection Agency mandate to create separate stormwater and sewer systems by 2025. Prior to that, the village had combined stormwater and wastewater lines.

Rockey said Phase VI work includes the area generally east of Platt Street and north of Main Street. The village is installing all-new sanitary sewer infrastructure, including lines and manhole covers. The old sanitary sewer will remain and be used as the village’s storm water system.

The project will alleviate the sanitary sewer and stormwater all-flow in one line, which leads to system overflow during heavy rains, with the overflow dumping into the St. Joseph River.

“Phase VI will alleviate that overflow. And once Phase VI is complete, we hope to go right into Phase VII,” Rockey said.

Yagelski said once the project is complete, the village will begin budgeting to provide for ongoing maintenance of the separate systems.

Mom dies of Covid-19, now kids figure out how to stay together

'That's extraordinary:' Cooper reacts to audio between Trump and governors