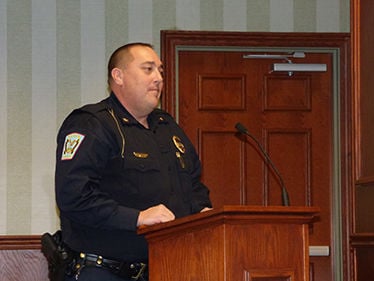 Chapa has been on paid administrative leave since Aug. 6 after Mohre told Bryan City Council that, following a heated argument between the two, the chief followed him home from work and entered his home despite repeatedly requesting that Chapa leave his property.

In an email to The Bryan Times, Wood County Sheriff’s Office Detective Lt. Rod Smith confirmed that Mohre had filed a complaint and that his allegations were under investigation. Smith said no charges had been filed and he declined to comment further on the situation.

Wood County Prosecutor Paul Dobson told The Times that if authorities determine the investigation warrants it, charges will be brought by Wood County for consideration by a Williams County grand jury for indictment.

Following the incident at Mohre’s home, Mohre sought to resign from the BPD. However, after hearing Mohre’s allegations, council voted to deny his request for resignation. He and Chapa were both placed on leave three days later.

Mohre, who has 42 years of local law enforcement experience, countered by saying that he was hired to work an administrative position (not road patrol) and that the allegation of destroyed documents referred to messages that he deleted from his personal phone and Facebook account.

“ … The only reason I brought the issues at the Bryan Police Department to light was to make the agency better, to protect the officers and staff currently working there under a difficult administration and to hopefully create an atmosphere that would help to make the Bryan Police Department the standard for law enforcement agencies in Williams County,” Mohre said in recent letter sent to The Times and shared on social media.

“To have this situation presented as if I did something inappropriate or borderline illegal is beyond frustrating and I will defend myself aggressively against any claims of impropriety or unethical behavior.”

No criminal charges have been filed against Mohre and Schlade’s letter refers to the allegedly destroyed documents as being part of a “non-criminal investigation.”

According to The Times‘ records, had his request for resignation been approved, Mohre would have been eighth city employee who works for (or in association with) the department to resign since Chapa was promoted to chief in December 2019.

Petito death ruled a homicide as search continues for fiancé

Biden calls for unity at the U.N. while in the middle of a spat with France