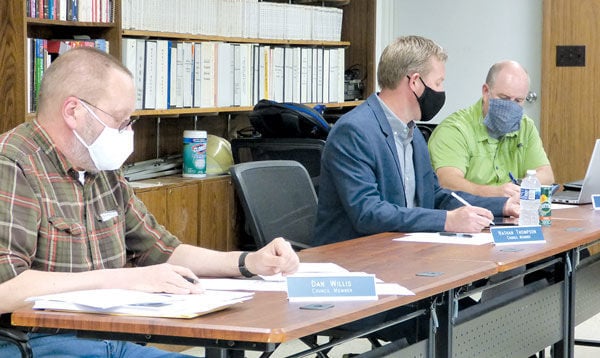 Councilman Dan Willis, left, and Nathan Thompson, center, voted in favor of a change order taking $3,580 off the Randolph Street Pump Station Project. Village Manager Jason Rockey, right, told them it was because a planned sewage pump had been removed. 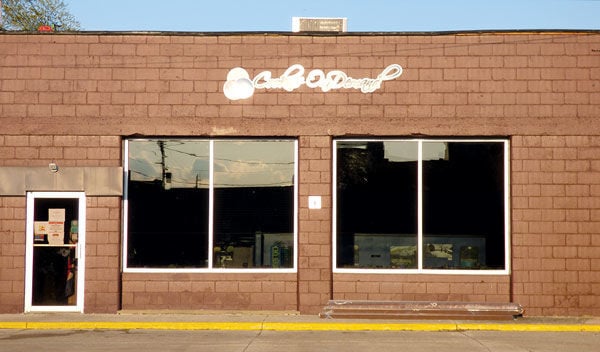 The Montpelier Village Council decided not to require a hearing for two additional liquor licenses at Cookies on Demand, which would allow them to sell beer and liquor.

Councilman Dan Willis, left, and Nathan Thompson, center, voted in favor of a change order taking $3,580 off the Randolph Street Pump Station Project. Village Manager Jason Rockey, right, told them it was because a planned sewage pump had been removed.

The Montpelier Village Council decided not to require a hearing for two additional liquor licenses at Cookies on Demand, which would allow them to sell beer and liquor.

MONTPELIER — The Montpelier Village Council approved a change order for a pump station project and chose not to have a hearing for two additional liquor permits for Cookies on Demand.

Peterson Construction had a change order for their work at the Randolph Street Pump Station, saying they could do the project for $3,580 cheaper than anticipated.

The overall project will take all the sanitary sewage from the south side of the railroad tracks and push it out to the wastewater treatment plant. Peterson was hired to install the pumps and controls.

“I think it was because one pump was removed,” said Jason Rockey, village manager. “There were originally going to be four pumps installed; We had three pumps installed because there wasn’t space.”

With the placement of the sump pump, the sewage pumps had to be moved which resulted in the loss of one of the pumps.

Separately, the council decided not to request a hearing regarding two new liquor permits for Cookies on Demand, specifically D1 and D3.

Councilman Nathan Thompson said this was for a new permit while Councilman Chris Kannel said the business already had a D2 license, which is for wine and mixed drinks for on-premises consumption or sealed carry-out.

D1 is for beer and can be for on-premises consumption or sealed for carryout. A D3 permit allows for liquor to be consumed on premises.

Solicitor Chris Walker said the hearing would be done through the Ohio Department of Commerce, Division of Liquor Control.

Rockey requested the village not require a hearing, as they have never had anyone have one before.

“I have not heard any objections to them having a liquor license,” he added.

Both matters were approved with a 5-0 vote of council. Councilwoman Melissa Ewers was absent for Monday’s meeting.

In other business, council:

• Went into executive session to discuss compensation of a public employee and acquisition of property with no action reported as of press time.

• Approved the village Park Board’s decision to name the trailhead park for the Iron Horse River Trail “Founders Park.” The park will be located on Main Street. Councilman Kevin Motter jokingly said he was partial to “Demisemiseptcentennial Park,” which is a term used for 175th anniversary.

• Accepted the retirement of firefighter Curt Wamer, as he did not have the time to keep up with the necessary training.

• Approved the winter road salt contract with the Ohio Department of Transportation. Rockey said they ordered 400 tons, the same they did last year. There was some left over last year, he added when asked by a councilman, but they had also had some left over from the previous year. He said the village went through “pretty much what we ordered” last year.

• Amended appropriations to added $2,000 for additional K-9 training and $60,000 for the demolition of the old water treatment plant, said Nikki Uribes, village fiscal officer. That money will include the asbestos treatment and included removing $35,000 appropriated for street work because the bids came in that much lower than anticipated.

Capitol officer to lawmakers downplaying insurrection: I don't get it

'It's disgraceful': Officer on people who spread lies about Capitol riot