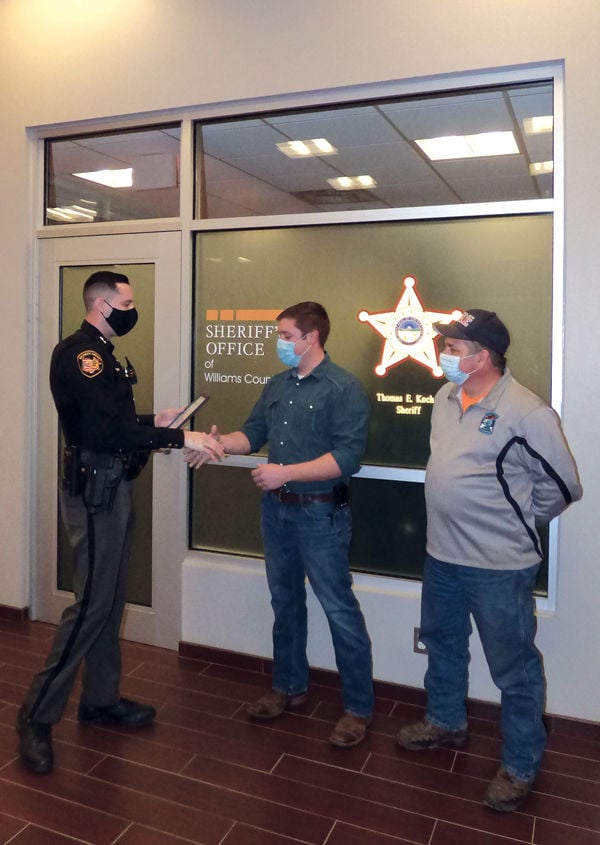 Montpelier firefighter Joey Sanders received a letter of commendation from the Williams County Sheriff’s Office Monday afternoon for the actions he took to stop a “highly intoxicated driver” at the scene of an injury accident on Nov. 27. From left are Deputy Kyle Miller, Joey Sanders and Montpelier Assistant Fire Chief Tim Sanders. 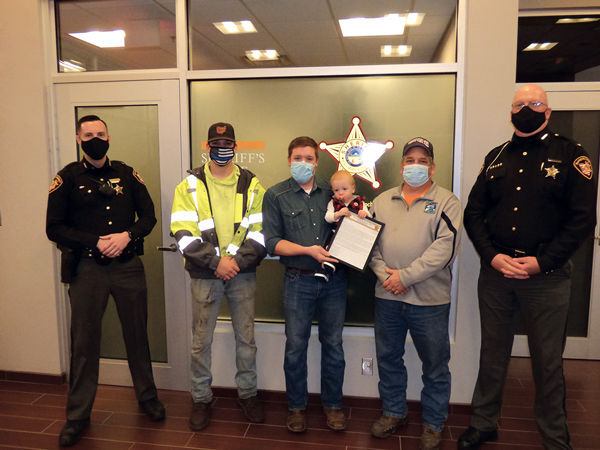 Montpelier firefighter Joey Sanders received a letter of commendation from the Williams County Sheriff’s Office Monday afternoon for the actions he took to stop a “highly intoxicated driver” at the scene of an injury accident on Nov. 27. From left are Deputy Kyle Miller, Joey Sanders and Montpelier Assistant Fire Chief Tim Sanders.

At 9:31 p.m. Nov. 27, 2020, rookie Montpelier firefighter Joey Sanders ticked off his dad, who also happens to be his boss, and for that he received a letter of commendation from the Williams County Sheriff's Office.

Sanders happened to be first on the scene of an injury accident on County Road 10 at Ohio 107 west of Montpelier when a southbound 2018 Kia Sorrento ran him off the road. He pulled out of the ditch, turned his vehicle around and raced ahead of the Sorrento to pull it over just as his dad, then-Fire Lt. Tim Sanders was cresting the hill in the same lane.

"I was cussing him out before I knew what happened," Tim said, but they didn't have time to talk.

The driver, who was "highly intoxicated and attempting to flee the scene," according to the accident report, put her Sorrento into reverse, heading right toward Deputy Kyle Miller who had just arrived and exited his cruiser. That's when the younger Sanders jumped into the moving car with her, managed to put it into park and pulled the keys.

"The Sorrento had heavy front-end damage from striking a trailer and the lights were broken," Miller said. "Between that and topography, there's no way Tim could have seen her coming."

The commendation stated that Sanders' "courageous and selfless actions" prevented serious injury or death to both individuals.

"It was a good move," Sheriff Tom Kochert said. "You averted very bad things from happening and everybody got to go home that night ... Thanks for jumping in; It means a lot."

In an ironic twist, Joey Sanders joined the Montpelier Fire Department in August 2020, after serving one year with the Montpelier Police Department. "I tried it and decided that's not for me, but the drive to help people is very strong," he said. "I've seen it in my dad my whole life."

Tim Sanders, who was promoted to to Assistant Fire Chief on Jan. 1, has served with the Montpelier Fire Department for 30 years. Joey's brother Tanner also joined the fire department in August.

"We make up 12% of the department," Joey said. "It gets pretty interesting during roll call."

What will be Trump's legacy? Hear historian's prediction

See how Trump could get booted from his next home

FED GUIDELINES LET SMOKERS GET VACCINE BEFORE OTHERS