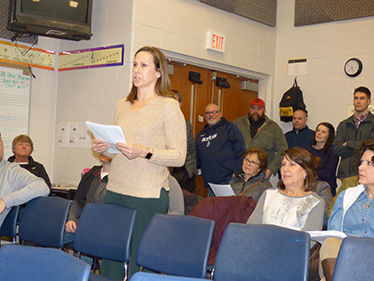 Montpelier resident Laura Rings, standing, poses questions to the Montpelier School Board about its support of Superintendent Jamison Grime during the board’s meeting Tuesday.

Montpelier School Board President Jeremy Clinger, left, answers questions from the audience during Tuesday’s at-times contentious board meeting. The board reaffirmed its support for Superintendent Jamison Grime, despite calls for Grime’s contract to be rescinded by March 1. At right is board member Nate Rose.

Montpelier resident Laura Rings, standing, poses questions to the Montpelier School Board about its support of Superintendent Jamison Grime during the board’s meeting Tuesday.

Montpelier School Board President Jeremy Clinger, left, answers questions from the audience during Tuesday’s at-times contentious board meeting. The board reaffirmed its support for Superintendent Jamison Grime, despite calls for Grime’s contract to be rescinded by March 1. At right is board member Nate Rose.

MONTPELIER — The Montpelier Exempted Village School Board said Tuesday it stands by its decision made in February 2019 to extend the contract of Superintendent Jamison Grime, who has been a lightning rod for criticism by teachers and community members during the past year.

In a prepared statement, board president Jeremy Clinger said the board sought legal counsel to address requests made at the January meeting to rescind Grime’s contract by March 1, due to what critics have termed a “toxic culture.” But Clinger, in his statement on behalf of the five-member board, said the board stands by its decision to renew Grime’s contract.

“At this point, it is our opinion that pettiness is driving the majority of current complaints and complications ... on all sides. Emotions are running high and it is showing,” Clinger said.

For about six months, members of the Montpelier Education Association (MEA) have been attending board meetings and have leveled charges against Grime of bullying of MEA members; fear of retaliation or reprisals for raising concerns; a belief there is favoritism or bias for certain individuals depending on friendships and family relationships; a feeling that teachers are not valued by administration; and a lack of trust that administration is willing or capable of making positive changes to improve the working atmosphere.

Clinger noted in his statement however that while the board has been approached about and heard about wrongdoings by school administration, not one formal report or grievance has been filed.

Nearly a dozen people in the overflow meeting crowd Tuesday made comments questioning Grime and the board, or expressing support.

Don Schlosser, a Montpelier Schools maintenance supervisor, said he supported Grime “100 percent,” while Nick Jones, a parent in the district, said he has grown to respect Grime and the teachers who have helped his children thrive.

Jones pointed to social media criticism of Grime and said charges of bullying leveled by Grime’s critics “goes both ways.” Jones’ comment drew a sharp rebuke from Laura Beck, who said Jones had “no clue about what’s going on” in reference to the ongoing issues of bullying and intimidation by Grime toward teachers.

“We are standing up for teachers,” Beck said, a comment that drew a round of audience applause.

Other audience members questioned why the board renewed Grime’s contract 18 months prior to its expiration, why board minutes of the January meeting were not available until just before the Tuesday’s meeting and what action the board took regarding teacher surveys that were undertaken last year.

Board member Nate Rose said in his research, approving a contract 18 months in advance is “consistent” and “not unusual” because other local districts do something similar, and it’s the fourth time during Grime’s 12-year term as superintendent that an extension has been approved 18 months in advance.

Clinger said the teacher surveys and personal conversations were conducted to reach out to teachers, and were taken with the understanding they would be and remain confidential. Rose said discussions about the surveys were held in closed, executive session and Clinger said no formal on-the-record report of those surveys would be publicly discussed or released, in accordance with promises of confidentiality made to teachers.

Board Treasurer Carla Rice said she had been delayed by health issues in getting minutes posted in a timely manner. That prompted a question by audience member Kevin Moore about having a backup plan, along with criticism by several other audience members of how unwieldy the minutes are to access on the district website.

Also, both Patti Rockey and Steve Yagelski questioned the accuracy of previous board minutes, saying their comments were inaccurately embellished and that a 17-point detailed report of school culture by Grime was included in the minutes though Grime did not give the full report during the meeting.

The board then agreed to table acceptance of January’s meeting minutes until Rice can make the revisions. Rose also apologized to Yagelski for the board’s lack of response to questions Yagelski posed to the board in his January prepared statement.

After the meeting, Yagelski — who is mayor of Montpelier and husband of MEA co-president Stacie Yagelski — also questioned why a superintendent’s report made by Grime was not on the meeting agenda for both the January meeting and Tuesday’s meeting.

During that superintendent’s report, Grime confirmed the district and MEA are engaged in mediation in an attempt to resolve ongoing issues, with one meeting held Jan. 22 and one set for today. The meetings are conducted by a federal mediator at no charge to the district and the meetings are closed and confidential, Grime said prior to Tuesday’s meeting.

The board went into closed, executive session at the end of Tuesday’s meeting to discuss personnel issues, with Grime saying no action was expected by the board upon returning to open session.

Stacy Yagelski and MEA co-president Khrysta Coleman both said after the meeting they thanked the community for its support.

You can now buy a bobblehead of Dr. Fauci