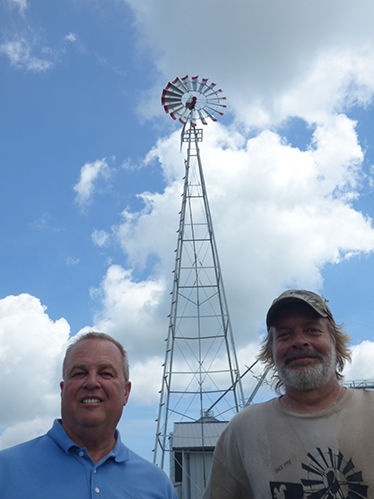 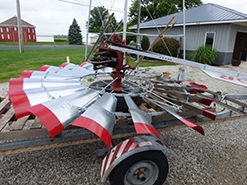 Pictured is the new “mill,” or motor, red-tipped blades and tail, as it’s readied to be installed on top of the windmill ar Newcomer Farms, on US 15/127, just south of Bryan. 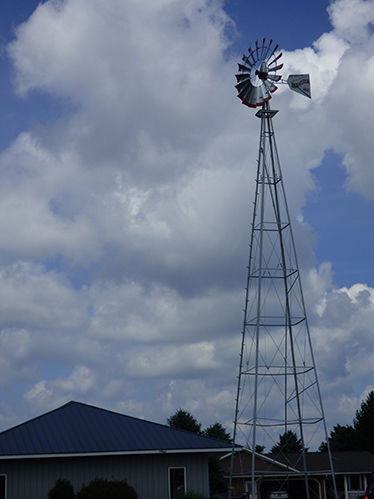 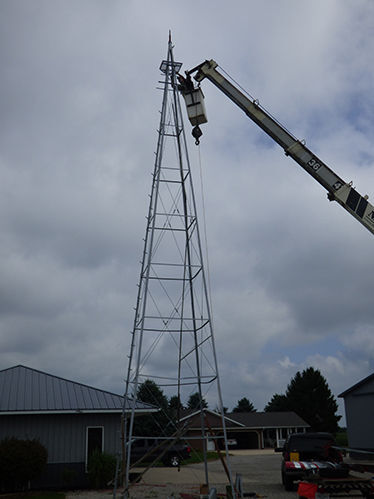 Pictured is the new “mill,” or motor, red-tipped blades and tail, as it’s readied to be installed on top of the windmill ar Newcomer Farms, on US 15/127, just south of Bryan.

Tuesday, Glen Newcomer and Jim Koch teamed up to bring the windmill on Newcomer Farms back to life.

“This windmill has always been a reference point on the farm. We’re trying to restore it back to its original condition,” Newcomer said as Koch worked at the top of the 50-foot tower, preparing for the installation of a new “mill,” or rotor and blades.

The windmill itself — the tower plus the mill — dates back about 110 years and is a visible landmark on the Newcomer Farms property along the east side of Ohio 15/U.S. 127, just south of Bryan’s city limits. In his office on the Newcomer Farms property, next to the windmill, Newcomer points to a picture frame that holds the original April 1866 deed to the farm and notes that his 28-year-old son, Jason, is the seventh generation Newcomer to work on the farm.

Glen Newcomer said the windmill sits on the site of the original family log cabin that dates back to 1872 and the windmill was installed by his grandfather, Harley, around 1910.

While windmills had various uses, such as for grinding grain in the 1800s, Newcomer said the windmill on his farm was used to draw up water from underground, which allowed farms to have water for both humans and cattle.

Newcomer said his windmill’s rotor and blades had not functioned for more than 40 years. He said the process to fix it began about a month ago, when he contacted Koch, owner of the Hoagland, Indiana-based JK Windmills company, who Newcomer said he exchanged business cards with at a convention in Fort Wayne, Indiana, about a decade ago.

“I like preserving the family history and heirlooms. I was sitting at my desk and I happened to see his card and I thought, ‘This would be a great time to do this (repair the windmill’s rotor and blades),’” Newcomer said.

Koch, who was accompanied to the job site Tuesday by his wife of 3 1/2 years, Beth, said about 22 years ago, he decided he needed a windmill for his farm. When he couldn’t find one, he began to build one in his spare time when he wasn’t working his full-time factory job.

“In my extra time I’d search for parts, try to put them back together. It was kind of a part-time business ... I enjoyed it,” he said. Soon he found a steady stream of people stopping by to ask if he could fix their windmill, or if he could find parts or even build one.

“Right about then a light bulb went off, and I said, ‘Hey, maybe this could be a full-time business. I could work for myself,’” he said, recounting the events that led to the founding of his business.

Koch said Newcomer’s windmill is a rarity as it appears to have been built in the early 1900s by the Rex Windmill Company, and at 50 feet tall, is taller than most others he encounters. “I only know of two of these in existence,” he said.

Koch said the original mill had been replaced with one by Heller-Aller, based in Napoleon, which he replaced Tuesday with a mill — a motor, red-tipped fan blades and tail — by Aermotor. The Aermotor company website says it has “continuously manufactured windmills since 1888 and is the only windmill manufacturer in the USA.”

Once the installation was complete, Koch thanked Bryan-based Watson Well Drilling Inc., and crane operator Rob Watson, which provided the “lift” he needed, thanks to their 21-ton, 95-foot-tall-extension industrial crane.

Newcomer, joined by his wife, Ann, smiled broadly as he gazed up at the functioning windmill Tuesday afternoon. He pronounced himself more than satisfied.

“When I see this right now, it takes me back to my childhood. I know how much this windmill meant to my grandfather,” he said, wistfully.

Koch smiled. “We brought it back to life,” he added.