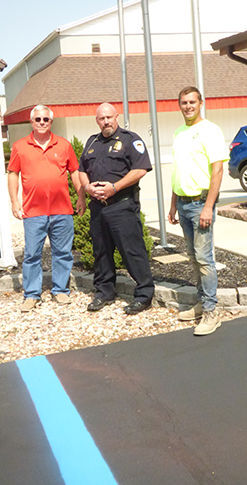 When Pioneer Street Superintendent Anthony Burnett offered to paint blue lines downtown in support of local law enforcement, Mayor Ed Kidston’s response was “Absolutely. Go for it. Do it now!” Burnett also tagged the driveway in front of the village’s public safety building. Pictured at the police station are, from left, Kidston, Police Chief Tim Livengood and Burnett. 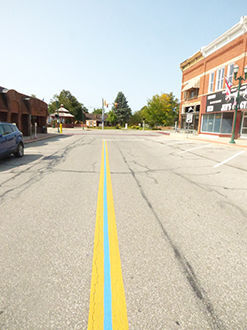 When Pioneer Street Superintendent Anthony Burnett offered to paint blue lines downtown in support of local law enforcement, Mayor Ed Kidston’s response was “Absolutely. Go for it. Do it now!” Burnett also tagged the driveway in front of the village’s public safety building. Pictured at the police station are, from left, Kidston, Police Chief Tim Livengood and Burnett.

PIONEER — Bad news always travels fast but every once in a while a good idea travels faster.

“Another town in Ohio did it,” Burnett said. “I don’t know where, just caught a glimpse of it on Facebook. Seemed like a good idea here so I brought it up to the mayor. He was 100% on board so I got a can of blue paint and ran with it. It took about an hour.”

In his press release announcing the change, Mayor Ed Kidston wrote, “You will notice an important addition to the first block of town regardless if you are headed North, South, East, or West. The double yellow line is to remind you to stay on your side of the road but the center blue line is so residents and non-residents alike will understand without doubt the Village of Pioneer will never defund our police, fire or emergency personnel.

“We will always respect their service to our community,” Kidston wrote. “We will always have their back. We will always be thankful for their dedication. In Pioneer we are blessed with outstanding individuals who work tirelessly year in and year out to keep our community safe and secure. God Bless each and every one of you!”

“I can’t believe it exploded like that,” Kidston said. “It’s nothing political. We just wanted to let everybody know we have really good people here. They’re human beings and they make mistakes, but we all do, and we’re going to watch out for them the same way they watch out for us.”

“It’s a nice gesture from our own community,” the chief said. “They have continually lent their support to all of our first responders.

“This is small-town America and I’m very proud of it,” Livengood said. “Not just professionally but as a person. This is where we’re raised to treat everybody with respect; My mom would have corrected me if I hadn’t and rightly so. I mean, we’ve had people come into town to protest, and I’m good with that. Everybody’s free to speak their mind and make their point. I just don’t want anybody to get hurt. That’s why we serve.

“The blue line is controversial for some, it means to me everything law enforcement is supposed to represent,” Livengood said. “It is the visible representation of the line between chaos and civility that your officers are sworn to protect and serve. It represents honor, integrity, humility, humanity, family and dedication to others.

“The line should be, and I hope is, an image of positivity and inclusion that we are all in this together as a strong and supportive community. I hope it reminds you that we are here for you when needed and called upon no matter what the need might be,” Livengood said.

Bill Gates says he thinks Trump's travel ban made outbreak in US worse. Here's why

Hear what Trump supporter told his daughter before dying from virus

Hear what Trump supporter told his daughter before dying from virus