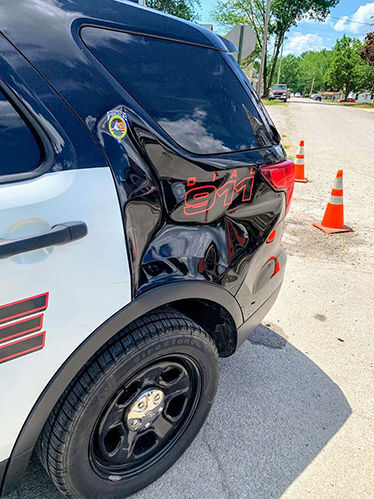 Pioneer police said this indent shows where Chief Tim Livengood was crushed between his cruiser and a utility truck while he was assisting at the scene of a fire, Friday in Montpelier.

Pioneer police said this indent shows where Chief Tim Livengood was crushed between his cruiser and a utility truck while he was assisting at the scene of a fire, Friday in Montpelier.

The Pioneer Police Department said Chief Tim Livengood was “crushed” between two vehicles while assisting at the scene of a fire in Montpelier on Friday.

However, Livengood was able to survive the incident with no serious injuries, according to a post on the department’s Facebook page.

The department posted on Saturday that Livengood “was standing by the back quarter panel of his cruiser when a utility truck cut the corner, misjudging the distance between the truck and the cruiser and the chief was crushed between the two vehicles.”

“The indentation in the cruiser was made by his body and he was pressed into it by the truck. You can even make out the radio he wore on his belt in the dent. Luckily, he was in such a position that he was able to roll away towards the back of the cruiser which probably saved his life or at least very serious injuries,” police posted.

The department said it shared the news on social media to illustrate the inherent dangers of a career in law enforcement.

“When dealing with traffic and moving vehicles, nothing is ever taken for granted and in just the blink of an eye, an officer might no longer be with us no matter how much precaution they take on the job,” the post said.

“Remember to also pay attention on the roadway to potential hazardous situations that could involve you in a crash and remember to move over for lights. It’s the law.”

Friday’s fire in Montpelier destroyed a home and garage at 312 W. Lawrence St., and caused damage to two neighboring residences.

Could this be T-Rex's relative?