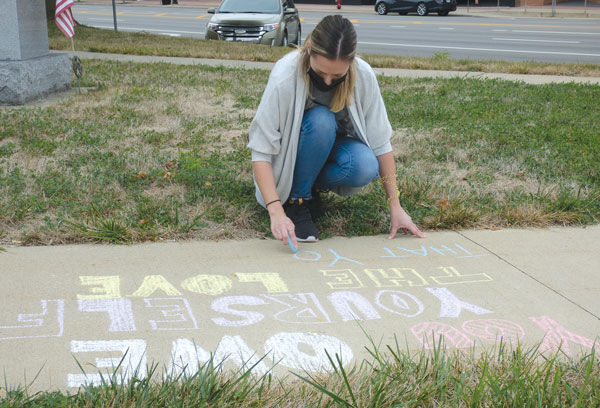 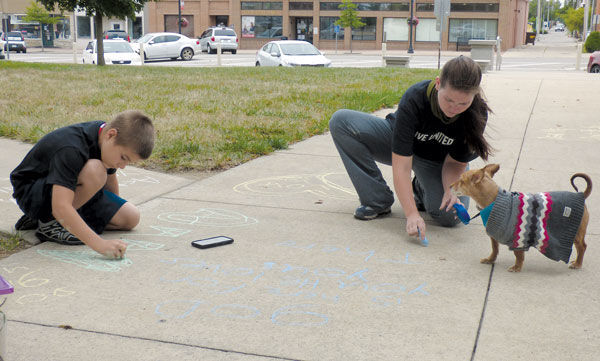 Kevin, left, and his mother Christina Bear chalk positive messages on the courthouse square in Bryan on Thursday. 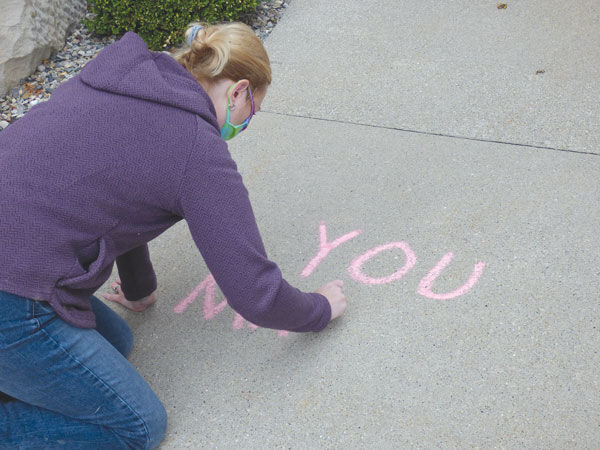 Lisa Whittaker writes “You matter” on the courthouse square in Bryan on Thursday afternoon.

Kevin, left, and his mother Christina Bear chalk positive messages on the courthouse square in Bryan on Thursday.

Lisa Whittaker writes “You matter” on the courthouse square in Bryan on Thursday afternoon.

Sometimes all it takes is an encouraging message to help someone depressed get through the day.

That is the philosophy behind the actions taken by Sarah’s Friends and its supporters on Thursday.

Sarah’s Friends had asked people to meet them on the square and write positive, inspiring messages in chalk on the sidewalks.

“We did this last year and got great response,” Rachel Blanton, program manager at Sarah’s Friends, said. “It’s pretty easy and it takes as much or as little time as you want.”

She said the idea was to write a positive message and maybe make a difference in a person’s life.

They first did this last year, and it was a success.

“We did find out through the grapevine last year that we did positively affect someone’s life last year,” Blanton said. “We feel like the more positive right now the better ... This is a tough year.”

They also helped out at the United Way on Thursday, doing a similar project.

Messages chalked Thursday include: “God is here for you. He loves you;” “Kindness begins with the understanding that we all struggle;” “You matter;” “Tomorrow needs you!!!” and “Every flower must grow through dirt.”

Illustrations such as flowers or a sun accompanied some of the words, and one person wrote down the national suicide prevention lifeline number (1-800-273-8255).

“There is positive around here. You might have to look a little harder in these times but it’s here,” Blanton said.

Renee Elder and Cheryl Renard were both participating.

Although it wasn’t why Elder came to the event, she does have a personal connection to the event as her boyfriend’s brother committed suicide.

“As I was writing this I thought — my boyfriend just left town today — and I said, ‘Oh my gosh, (my boyfriend) would have loved to be here. I’m so glad we’re doing this right now,’” she said. “We’re taking pictures so he can see them. But, it will definitely keep me doing it.”

Elder heard about the event from Renard, who is the director of Cancer Assistance of Williams County.

Renard got a flier for it and invited Elder along and said she came because “I love to spread my joy and kindness everywhere.”

“Everybody needs this,” Renard said.

Elder concurred. “Even if they aren’t suicidal, just depressed, it can help people to just keep going.”

Blanton said she wanted to remind people that Sarah’s Friends is available for anyone suffering from a crime.