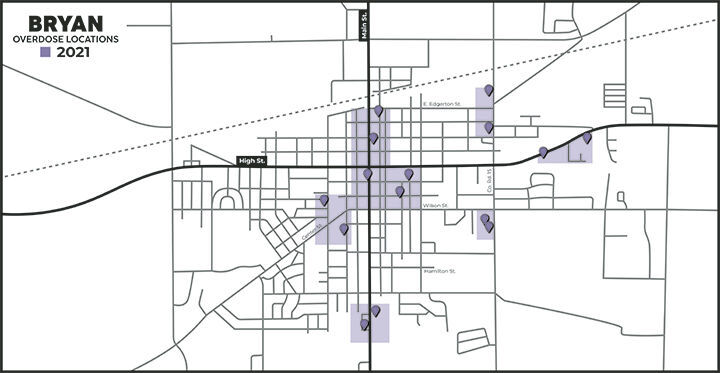 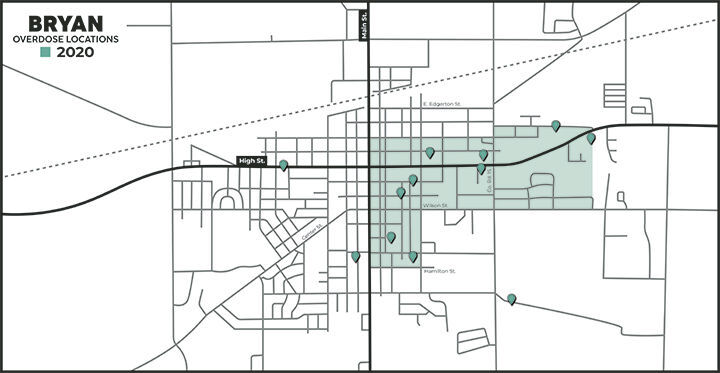 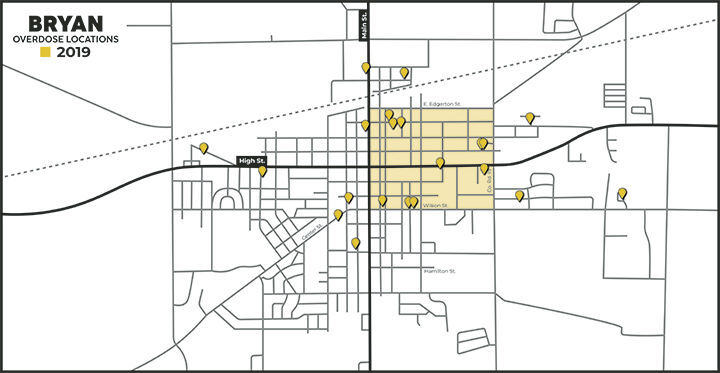 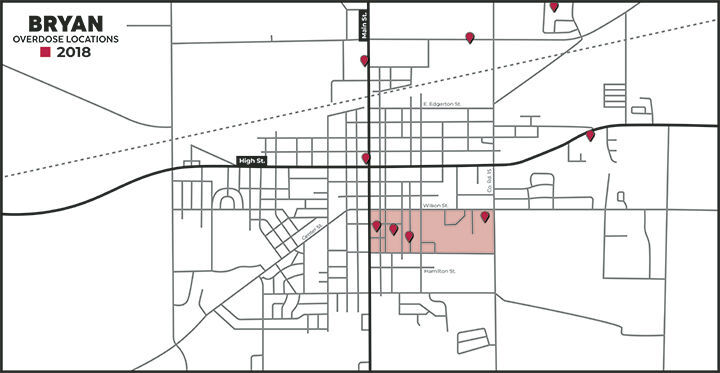 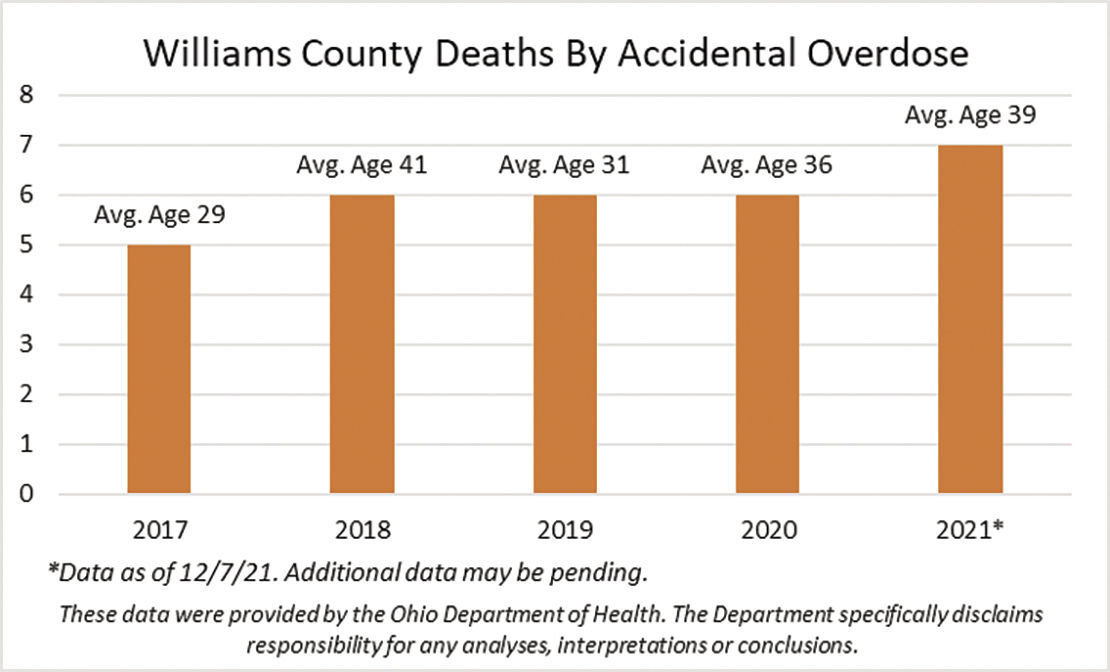 This graph from the Ohio Department of Health shows the number of drug overdoses in Williams County for the past five years, along with the average age of the victims each year. What is believed to be the eighth OD this year is still pending investigation and confirmation.

This graph from the Ohio Department of Health shows the number of drug overdoses in Williams County for the past five years, along with the average age of the victims each year. What is believed to be the eighth OD this year is still pending investigation and confirmation.

In Williams County, the percentage of fatal overdoses appears to have increased even more percentage-wise, up about 33%, with six in 2020 and as many as eight this year.

“Williams County has pretty much stayed the same,” said Rob Giesige, CEO of the Four County Alcohol, Drug Addiction and Mental Health Services (ADAMhs) Board. “We saw six fatal overdoses per year in 2018, 2019 and 2020. So far in 2021, we’ve seen seven with one more pending investigation.”

Victoria Smith, director of health education and preparedness at the Williams County Health Department, reported five more fatal overdoses in 2017 and said all 30 confirmed fatal overdoses from 2017-2021 “were due to opioid use.”

The one this year still pending investigation is potentially the 31st fatal overdose in the county in the past five years due to opioid use.

“The state says we’re up 20-some percent, but we’re not dealing with huge numbers to begin with,” Giesige said.

The biggest change he noted was in demographics.

“In 2021, four out of those seven (confirmed fatals) were female,” he said. “We’ve never seen that before.”

“Numerically, meth is the drug of choice in Williams County,” Kochert said. “We are seizing much bigger amounts, ounces now versus grams before, but fentanyl amounts remain low.

“The number of folks starting in the drug cycle seems to be lessening, but those in the lifestyle are staying,” Kochert said. “Addiction is a tough monkey to shake, and though we have a lot of resources available to help, people need to come to the point where they want to stop. It’s the battle of the mind they have to win.”

Drug use is also still a major factor in all criminal activity, with 80-85% of crimes reportedly linked to it, he said.

“It’s the cycle of death,” Kochert said. “You use, you need money — you steal, rob, etc. You use again — keep repeating. It ends poorly if you remain trapped in it. It’s like the boil at the bottom of a dam. You just keep rolling over, never surfacing. Lots of lifelines are available, but you have to want to grab one.”

The number of reported overdoses per year in Bryan was decreasing prior to 2021.

EMS has responded to 21 reported overdoses in Bryan so far this year. The largest cluster is between East Wilson Street and East Trevitt Street, similar to the location of the majority of the calls in 2019.

Dispatch reports show Montpelier had a 37.5% spike in reported overdoses from 2019 to 2020, though that trend appears to have leveled off.

In 2019 ambulances responded to nine reports, with all of them north of the railroad tracks, scattered between Mill Street and Lafayette Street. In 2020 they responded to 22 reports between Mill and South Platt streets, but there were four in the 600 block of South Monroe Street and four more in the 8000 block of County Road 8.M, a road with just two dwellings northwest of Montpelier between County Road 17 and the Turnpike.

In 2021, ambulances responded to 11 overdose reports, with the same cluster between Mill and Lafayette streets, but only two in the 600 block of South Monroe Street.

Edgerton shows the same 300% increase as Pioneer had from last year to this year, but with even smaller numbers. Ambulances responded to one overdose report in 2018, another in 2019 and two more in 2020. So far this year they have responded for four scattered in and around the village.

There were no overdoses reported in Stryker in 2018 or 2020 and only one in 2019. So far this year ambulances have responded to three overdose calls, scattered throughout the village east of Defiance Street.

Ambulances responded to four reported overdoses at the Corrections Center of Northwest Ohio in 2018. There was only one in 2019 but three in 2020 and three more so far this year.

Of the remaining overdoses reported in 2018, one was in Alvordton and the other was in Holiday City.

In 2020, there was one overdose reported in Holiday City, another in Kunkle and two more in Alvordton.

So far this year, one overdose was reported in Alvordton and another from Nettle Lake.

There are multiple options to report drug activity, including local law enforcement, the Williams County Sheriff’s Office at 419-636-3151 and the Ohio State Highway Patrol at #677. The Multi-Area Narcotics Task Force tip line is 419-782-8709.

“No matter how small the information you have seems to be, it might just be the missing link to a search warrant, or an arrest,” Kochert said. “Either of those will not only stop the activity in your neighborhood, but could potentially save lives. Please call us, we can only go on what we’re given, and the public is our best source.”

Gen. Milley has message for Russia about Ukraine

2022 Nissan Frontier: New model is not really a 'Generation 3', more of a Generation 2 on steroids