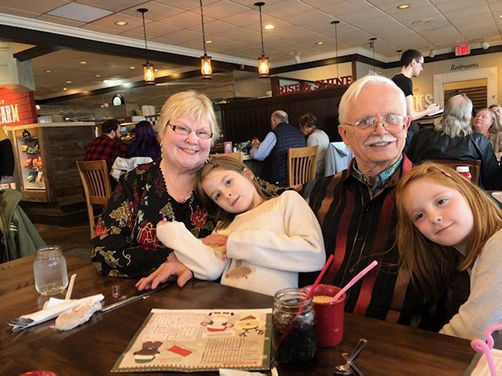 “They loved their kids and their grandkids,” Curt and Courtney Foust said of their parents, Carolynne and Gerald Foust, pictured here with their twin granddaughters, Reid, left, and Quinn Foust. 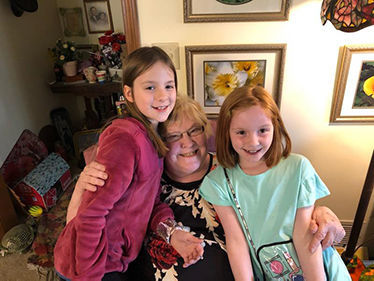 Carolynne Foust is pictured with her twin granddaughters 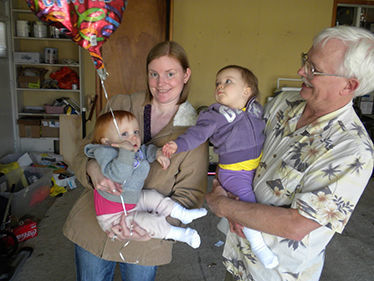 "He was a great grandfather. He had a big heart," Courtney and Curt Foust said of their father, Gerald, pictured here several years ago with his twin granddaughters. 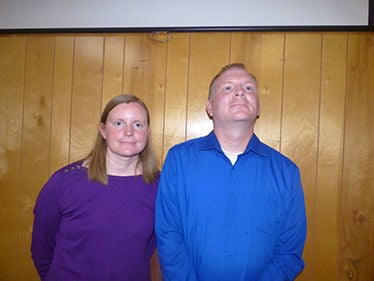 Curt and Courtney Foust said they wanted to thank friends and family who have expressed their condolences upon their parents' deaths, and wanted the community to know that despite the tragedy, their parents, Carolynne and Gerald Foust were devoted to their community, their church, their kids and grandkids and to each other.

“They loved their kids and their grandkids,” Curt and Courtney Foust said of their parents, Carolynne and Gerald Foust, pictured here with their twin granddaughters, Reid, left, and Quinn Foust.

Carolynne Foust is pictured with her twin granddaughters

"He was a great grandfather. He had a big heart," Courtney and Curt Foust said of their father, Gerald, pictured here several years ago with his twin granddaughters.

Curt and Courtney Foust said they wanted to thank friends and family who have expressed their condolences upon their parents' deaths, and wanted the community to know that despite the tragedy, their parents, Carolynne and Gerald Foust were devoted to their community, their church, their kids and grandkids and to each other.

The call was not unexpected, Courtney Hodacs said. Her mother, Carolynne Foust, a longtime, well-known teacher at Central Local Schools and Northwest State Community College, had been in declining health for years, even prior to her retiring from teaching about 14 years ago.

Carolynne had multiple major health issues, including diabetes and high blood pressure, and in mid-June, was hospitalized in Fort Wayne, Indiana, for a week for complications of end-stage kidney failure. Six years ago, Courtney said, her mother had a heart attack "that she barely survived."

So while she was braced for the possibility of a call about her mother, Courtney said she was startled when she received the call June 22. Both Carolynne, 78, and Gerald, 70, also a retired Fairview/Central Local Schools teacher and her husband of almost 47 years, were found deceased in their home on Cardinal Drive in Bryan.

"Quite frankly, I was thinking I would get a call, but I thought it would be about my mom. I never pictured it being both of them at once," Courtney said in an interview with The Bryan Times earlier this week that included her brother, Curt Foust.

Police are continuing to investigate, but in a press release issued June 24, Bryan Police Chief Chris Chapa said: “The preliminary autopsy results indicate this is a homicide/suicide.”

Curt and Courtney said they have received no additional details about the incident as authorities continue to investigate. However, while saddened, both said they wanted to tell another side of the story, one that respectfully and more accurately reflects the lives of their mother and father, who devoted their lives to teaching, their community, their church, their kids and grandkids and to each other.

Courtney, 44, and Curt, 42, said they grew up in Mark Center. Their parents were both teachers in the nearby Central Local School District when they met, and they married Aug. 11, 1973.

Both Curt, who graduated from Fairview High School in 1996, and Courtney, a 1995 Fairview graduate, said their parents' love of teaching and the way they conducted themselves as positive role models inspired them to also go into teaching.

Courtney, who is married and lives outside of Atlanta, has taught for the past 15 years, including a few years at Northwest State Community College and the past nine years as a college instructor of online classes for Missouri-based Columbia College.

Curt, married for 12 years with 9-year-old twin girls, lives in Bowling Green and just completed his 20th year teaching first and second graders and Title 1 Reading at Fairview Elementary. He also coached track and cross country until a few years ago.

"School was always a big part of my life. I liked riding the bus, hanging out in my parents' classes. I'd help Mom set up her classroom (at the beginning of) every year," Courtney said.

"It was what I was used to. I liked what I saw (of his parents' teaching)," Curt said.

Both Courtney and Curt said in the past week they've received an outpouring of cards, condolences and well wishes from dozens of Carolynne and Gerald's friends and former students.

"We've heard from so many people who had (Carolynne and Gerald) as teachers through the years. Most of our friends had them as teachers ... people have had such positive things to say about them," Courtney said.

"It's been a little overwhelming. I probably got 20 cards in the mail today (Monday)," Curt added.

Both said their parents were very "gentle" and "peaceful" and devoted to each other.

"They had many friends ... they were very social. They did so much together. And even with her illnesses, he was always so gentle, so patient with her," Courtney said.

"And (Carolynne) was a great piano player. She played for their church and she even went around and played at other churches in the area. She loved music ... there was always singing and always music in her classroom," Courtney said.

Both were proud and doting grandparents to their granddaughters, though Carolynne wasn't able to visit them in Bowling Green as often as Gerald was, due to her health issues.

Gerald visited his granddaughters in Bowling Green often, and shared his love of fishing by buying each of the twins fishing poles. And the poles got larger as the twins grew bigger, Curt said with a smile.

"He was a great grandfather. He had a big heart ... They loved their kids and their grandkids," Courtney said as Curt nodded in agreement.

However, Carolynne's health was deteriorating rapidly, and Courtney said, looking back, there were several incidents that may have been foretelling.

For one, she said her parents made it a point recently to visit a number of their friends, even ones that they may not have had any particular reason to visit.

Curt said he received a call from his mother on or near their final day. The call wasn't unusual, but then his mother also put her father on the phone, as well. "She called me the day we think it happened, and both of them talked to me, which is unusual," Curt said.

Curt also received a call from his father the day his mother was being released from the hospital, which he believes was probably on, or very near the day before, her final day. "Dad called and told me I really needed to talk to Mom. I tried calling her and she hung up on me. But before she did, she just said, 'it's too late,'" Curt said.

Carolynne, a graduate of Fort Wayne Bible College, in particular was very religious and she and Gerald were very active members of their church, making the circumstances of their passing even more difficult to understand. Yet there were the health issues that seemed to make Carolynne, in particular, more and more despondent.

"They had so many friends. They liked to get out and do things, but (Carolynne's health issues) made it harder," Courtney said.

"They loved life. And they loved each other," she added. "But maybe my Mom's health issues were that traumatic. She had stage 3 kidney failure and all the other health issues ... together, maybe it was just too much.

"I know they loved us," Courtney said. "It's left me with many questions ... I'm trying to imagine what their last thoughts were."

"Honestly, I thought she'd go (first) and we'd work with Dad. I was planning on having Dad come to Bowling Green and spending his time there," Curt said.

In the end, though, Curt and Courtney said they believe their parents, who were so full of life and inseparable for nearly 47 years, but whose lives were made so much more difficult due to Carolynne's rapidly deteriorating health issues, made their final decision together.

Friends of the Foust's have begun a GoFundMe account to help the family with expenses. To contribute, log on to: www.gofundme.com/f/funeral-expenses-for-foust-family.

'No one has lost the state of Arizona more than Donald Trump': Berman on Arizona audit