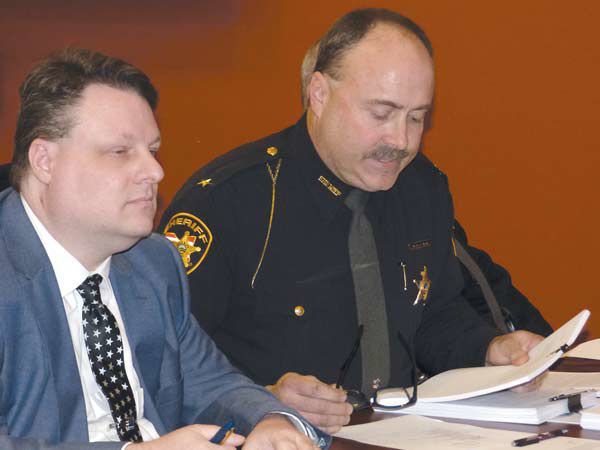 Williams County Sheriff Steve Towns, right, speaks during a protest hearing of his candidacy for sheriff in the March primary. Pictured at left is his counsel, Hank Schaefer, of Groth & Associates out of Toledo. LUCAS BECHTOL/Staff 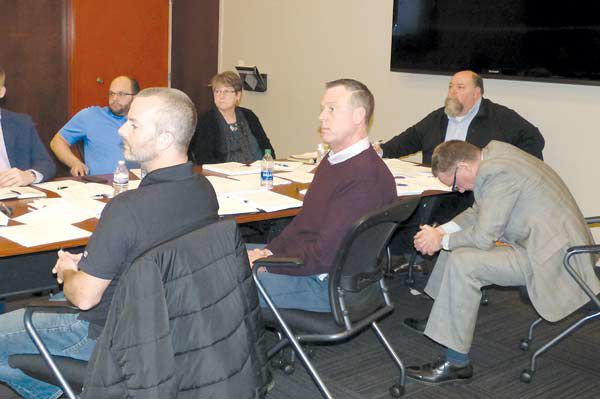 The Williams County Board of Elections listens to testimony during protest hearings for candidates for Williams County sheriff. Pictured in front, from left, are board members Scott Towers, Jeffrey Erb, Paul Duggan and Mark Fox Sr. In the background are A.J. Nowaczyk, elections director, left, and Katrena Ebersole, deputy director. LUCAS BECHTOL/Staff

Williams County Sheriff Steve Towns, right, speaks during a protest hearing of his candidacy for sheriff in the March primary. Pictured at left is his counsel, Hank Schaefer, of Groth & Associates out of Toledo. LUCAS BECHTOL/Staff

The Williams County Board of Elections listens to testimony during protest hearings for candidates for Williams County sheriff. Pictured in front, from left, are board members Scott Towers, Jeffrey Erb, Paul Duggan and Mark Fox Sr. In the background are A.J. Nowaczyk, elections director, left, and Katrena Ebersole, deputy director. LUCAS BECHTOL/Staff

Incumbent Sheriff Steve Towns will not appear on the Republican primary ballot after a hearing by the Williams County Elections Board on Monday.

At issue was the viability of his candidacy after a Nov. 5, 2019, conviction in Bryan Municipal Court on a first-degree misdemeanor charge of disseminating confidential information about a child abuse case.

According to Ohio Revised Code 311.01 (B) (5), a candidate for sheriff is disqualified from the ballot if convicted of a first-degree misdemeanor.

The board unanimously came to the decision that Towns had to be removed from the ballot.

“I think it’s important to understand our duty is to uphold the law,” said board member Scott Towers. “It’s not to retry your case, it’s to do what we’re legally obligated to do, according to the revised code.”

The Ohio Revised Code, he continued, states someone with a first-degree misdemeanor conviction can’t run for the office.

It would be no different for any other candidate for sheriff, Towers added.

“For the board’s integrity’s sake, I think it’s important for us to be consistent,” he said. “We’ve had other candidates in this election cycle who we’ve had to tell can’t be on the ballot for pretty minor reasons but the law requires us not to allow them to be on (the ballot).”

Paul Duggan, another board member, said the board exists to make elections fair and efficient and they don’t want to get into issues about constitutionality or details of the law, saying “we aren’t judges.”

“We’re a quasi-judicial board,” he said. “I don’t want to do this, but these guys made it clear, I don’t have any choice. We’re not here to render an opinion on (Towns’) appeal ... At the end of the day, I’ve got to vote to kick you off the ballot. I don’t want to do it, but the case law is clear.”

Towns said he was planning on appealing the board’s decision while also pulling a petition to have Sheriff’s Lt. Greg Rusky run in the November election as an independent candidate for the position of sheriff.

“I will support him fully and I will ask the citizens of Williams County to support Rusky for sheriff,” Towns said. “If I win at the supreme court, we’ll deal with that then.”

Towns’ attorney, Hank Schaefer, of Groth & Associates out of Toledo, said after the vote that the appeal on the board’s decision will be made before the March primary.

That means if he wins the appeal, which will be made either to the Secretary of State or the Ohio Supreme Court, he would still appear on the ballot.

No matter what happens, Towns said he wanted to continue serving the county.

“I’m happy with whatever,” he said, adding a misdemeanor wouldn’t prevent him from working as a deputy. “I’m a public servant who is going to serve the public anyway I can.”

Towns objected to the protest for his removal, saying the board is given “wide-ranging discretion” on the decision and pointing to cases from Harding, Miggs and Sandusky counties in which candidates were left on the ballot “in all aspects and in all possibilities.”

Earlier in the meeting, Towns handed each of the board members a thick packet of information, including a five-and-a-half page statement from him with exhibits including emails and other documents.

Through the statement and papers, he questioned the actions of officials including Williams County Prosecutor Katie Zartman in not going through the Ohio Ethics Commission for his misdemeanor charge.

He asked the board to not allow the “manipulation of the legal system to remove the option of the citizens of Williams County to be able to choose who they want to go forward.”

Schaefer brought up a dissenting opinion from Justice Paul Pfeifer on the qualifications for sheriff.

“(He) repeatedly said the statute is unconstitutional,” Schaefer said. “He said there is not even a rational basis for the existence of the statute, that the people should have the right to elect whom they wish.”

The three “well-crafted” pleas to have Towns removed from the ballot should have been made not to the board of elections, he said, but rather to the electorate, which has a better opportunity to choose a good sheriff with more names on the ballot.

“Based on that, I would urge you to not remove the candidacy of Sheriff Towns from the ballot,” Schaefer said.

The board’s special counsel, Derek Clinger, said the board doesn’t have the authority to declare a law unconstitutional and a court hasn’t done that, yet.

The board also heard protests made by Towns against the other candidates and the elections board, itself. All those protests were dismissed.

That was dismissed as it is not the purview of the election board to decide how the signatures were collected, nor to reject them under these circumstances.

Protests against Livengood and Fulk questioned whether a classified public employee, such as police officers, could run for political office.

Both were dismissed as no law prevented a classified employee from running for a political office.

Towns questioned a discrepancy in Kochert’s election profile, which stated he attended Hocking College in the 1980s but only received his degree in 2019.

The board dismissed the protest, as it didn’t matter when he received the degree, only that he ultimately received it, as it is a necessity to run for sheriff.

Also at issue was a protest about potential conflict of interest by County Prosecutor Zartman to act as the board’s legal counsel. A special counsel was appointed to oversee the board and no conflict was found.

Another protest about the timing of the hearing was dismissed.

Tapper on Purpura defense: We know that that's not true