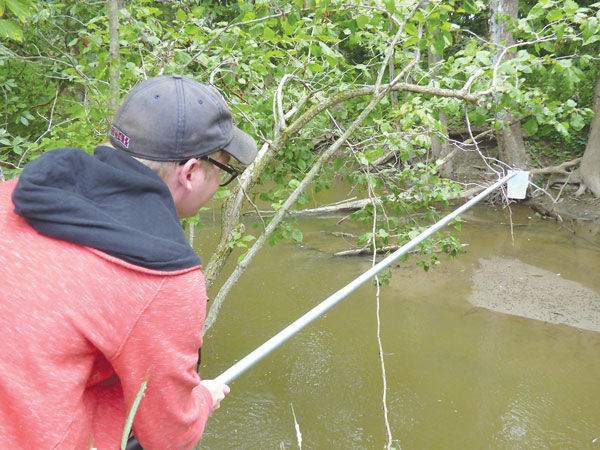 Braden Baumhower, a student at Bowling Green State University, takes a water sample from the St. Joseph River during the dedication of the St. Joseph River Confluence project. BGSU is working with state officials on collecting data on the effectiveness of the H2Ohio wetlands projects. 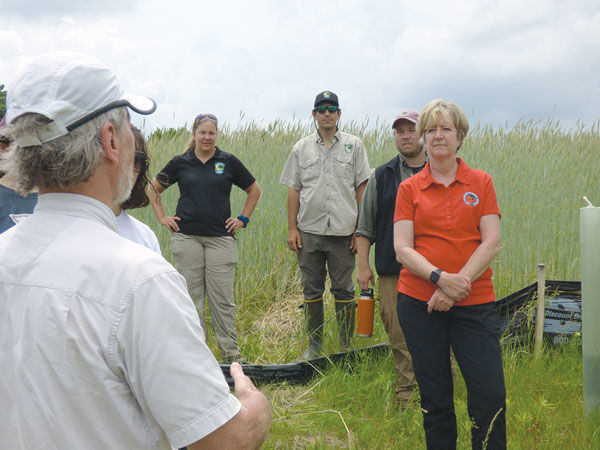 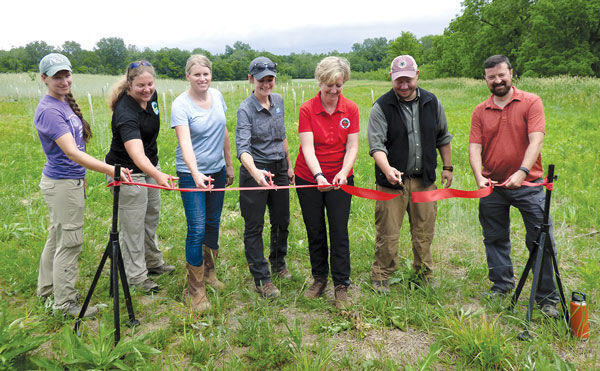 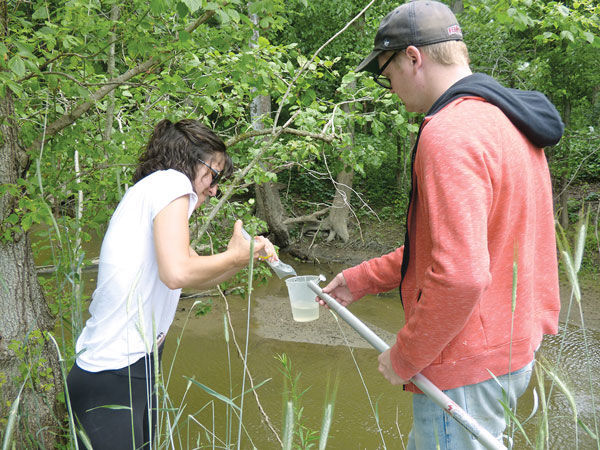 Braden Baumhower, right, and Lily Rosenberg, both students at Bowling Green State University, collect a water sample from the St. Joseph River during the dedication of the St. Joseph River Confluence project. BGSU is working with state officials on collecting data on the effectiveness of the H2Ohio wetlands projects.

Braden Baumhower, a student at Bowling Green State University, takes a water sample from the St. Joseph River during the dedication of the St. Joseph River Confluence project. BGSU is working with state officials on collecting data on the effectiveness of the H2Ohio wetlands projects.

Braden Baumhower, right, and Lily Rosenberg, both students at Bowling Green State University, collect a water sample from the St. Joseph River during the dedication of the St. Joseph River Confluence project. BGSU is working with state officials on collecting data on the effectiveness of the H2Ohio wetlands projects.

PIONEER — Just over 81 acres of restored wetlands and reforestation were dedicated Tuesday as part of the governor’s H2Ohio Initiative.

The initiative is meant to clean up water and prevent toxic algal blooms in places like Lake Erie.

Most of H2Ohio’s 57 projects are occurring in northwest Ohio right now (though Ohio Department of Natural Resources hopes more funding will allow them to expand it elsewhere) with two having been recently completed in Williams County.

The first, the St. Joseph River Wetland Reconnection, is located on a 94-acre property outside of Edon that was purchased by Black Swamp Conservancy. The restoration captures and treats subsurface agricultural drainage from surrounding farmland. H2Ohio funds were used to restore 34 acres of wetland and more than 1,000 linear feet of stream.

The second project is the St. Joseph River Confluence outside of Pioneer. Also owned by Black Swamp Conservancy, H2Ohio funds were used to restore 31 acres of wetlands, 11.47 acres of forest and 370 linear feet of streams.

“It’s called a confluence because, while difficult to see, we’ve got several different stream tributaries coming through here that interact with these flood plains,” said Christina Kuchle, Scenic Rivers Northwest Ohio assistant regional manager for Ohio Department of Natural Resources, at the site’s dedication. “The whole goal of this project ... we’re trying to retain as much water in the landscape as possible because it helps with retention.”

The projects were done in partnership with Black Swamp Conservancy, EnviroScience, Inc., which provided technical and restoration assistance, and Bowling Green State University, which will do the research.

Mary Mertz, director of ODNR, said in 2019 Gov. Mike DeWine wanted to get safe, clean water across the state.

Three agencies — ODNR, Ohio Department of Agriculture and Ohio Environmental Protection Agency — were tasked with coming up with a plan to clean water around the state and mitigate phosphorus levels specifically in Lake Erie.

“The general assembly and the governor worked together to enact a budget to provide the resources to make it possible and H2Ohio was born,” Mertz said. “We think wetlands are a really key tool in reducing phosphorus.”

Wetlands are nature-based, long lasting and have other benefits, including reduction of nutrients, carbon sequestration and wildlife habitats.

With 57 projects already on the map, Mertz said they were mostly concentrated in northwest Ohio, but they do have some in northeast Ohio and some in the Ohio River Basin.

“We do hope to expand the map, lots more dots, after enacting the new budget,” she said. “In the next few weeks, the Ohio General Assembly will enact a new budget and we hope there will be another $50 million to invest in these projects.”

Black Swamp Conservancy was one of the partners in the project, purchasing the land in Williams County on which the projects were created.

“It was a really high protection effort for us because this is the spot where the east and west branches of the St. Joseph River converge,” he said. “There are known rare and threatened species on this site and there is potential for others.”

One of these threatened species is the copperbelly water snake. Other wildlife in the area include migratory birds, Indiana bats, coyotes, deer, amphibians and more.

Krain called landscape “our heritage and our legacy.”

“The work that Black Swamp Conservancy and ODNR are doing here is really protecting our way of life in northwest Ohio by balancing our important working farms with critical natural areas like this one,” he said.

Black Swamp Conservancy is charged with managing the site. Water drained from nearby farmland will move through the wetlands, losing nutrients in the process, and into the St. Joseph River.

“The launch of this new project shows a strong start for H2Ohio in 2021,” DeWine said in a release. “The acquisition and restoration of these wetlands will contribute to our goals of improving water quality in the Maumee River Watershed and preventing algal blooms in Lake Erie.”

Bowling Green State University is one of the institutions charged with investigating the efficacy of the wetlands projects.

Bob Midden, research professor at BGSU, said the goal is to see if the wetlands decrease the phosphorus and nitrogen levels in the watershed.

“We’ve developed a plan for how to collect data, scientifically, that will tell us as accurately and reliably as possible how well these wetlands are doing that,” he said. “It will be possible to decide in the future where, when and how to build wetlands so they provide the best benefit at the lowest cost.”

It’s important to reach a balance between the needs of the economy and nature, Midden said.

“Like everything else in life, it’s about balance,” he said. “That’s our role, to scientifically determine, as well as possible, how well each of these is functioning and relate that to how they’re structured, where they are, the characteristics of the site.”

While their only charge from the state is to look at nutrient levels, there are other benefits including carbon dioxide and flood mitigation and wildlife. Midden said they have spinoff projects that will study these effects.

Grocery clerk killed after asking shopper to pull up his mask

Fiona Hill on 2018 Helsinki summit: Mortifying and humiliating for the country